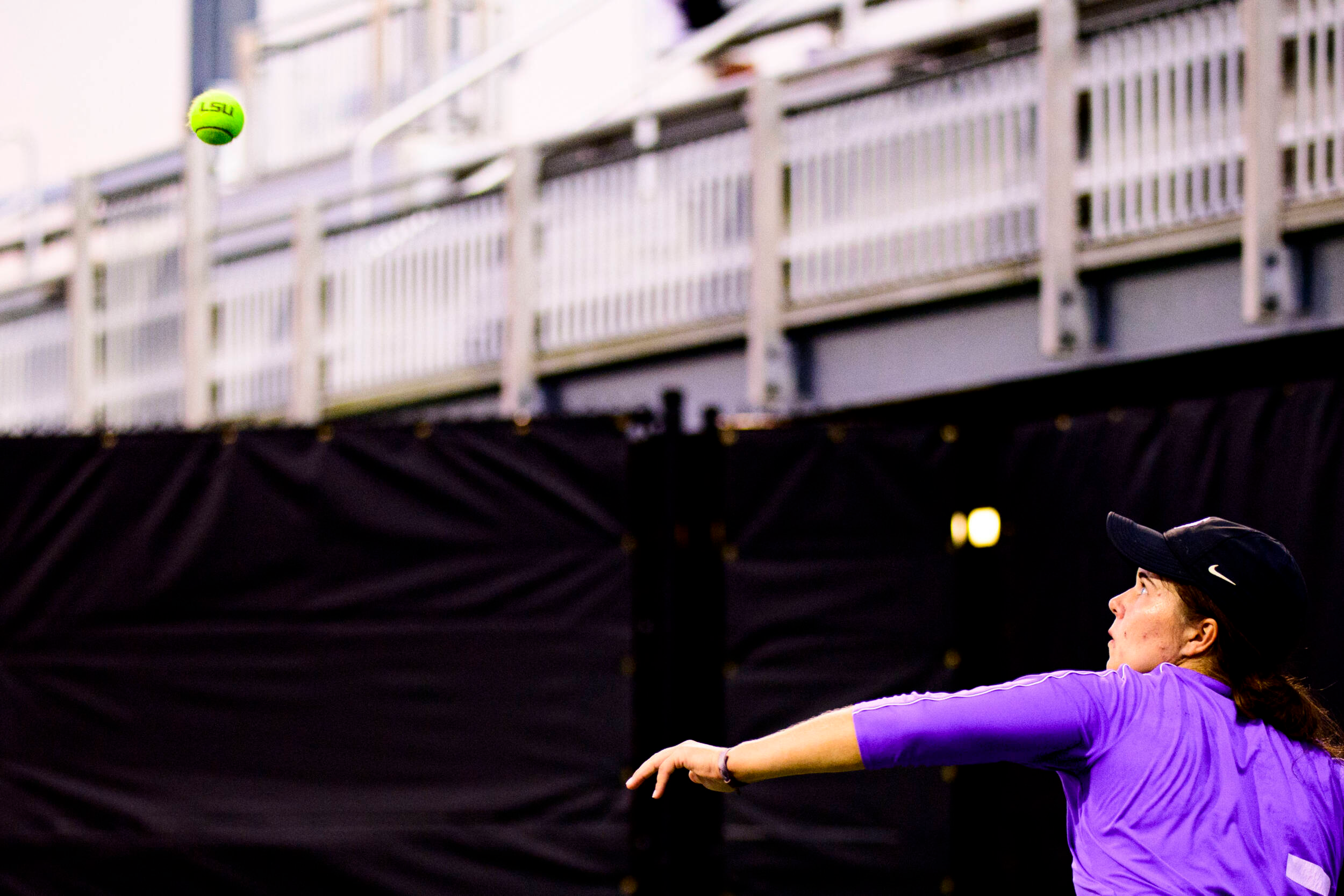 Doubles Results – Round of 16
LSU had three doubles pairs in round of 16 doubles action. The experienced pair of graduate student Mia Rabinowitz and Maggie Cubitt opened the day with a strong 8-2 win over Delien Kleinhans and Chems Doha Zeghloui from South Alabama.

The freshmen duo of Anastasiya Komar and Nikita Vishwase grabbed the next win for the Tigers as they took down Southern Miss’ Hannah Chambers and Alyssa Richter, 8-4.

The Tigers finished doubles undefeated for the second consecutive day as seniors Safiya Carrington and Nina Geissler held off SEC opposition in the form of Mississippi State’s Alexandra Mikhailuk and Maria Rizzolo by a score of 8-5.

Singles Results – Round of 32
Carrington carried her form into the first singles round of the day as she completed a perfect 6-0, 6-0 sweep over Troy’s Hagar Ramadan.

Vishwase was the next Tiger to grab a win as she made quick work of Mississippi State’s Dharani Niroshan in the first set, 6-1, before winning the second by a strong 6-2 margin.

At the next court, Cubitt took down Suhana Das in three sets. Das claimed the first set, 6-3, before Cubitt recovered with a 6-1 win in set two to extend the match. The third set had Cubitt in control as she only dropped two games in a 6-2 win to advance to the round of 16.

Komar rounded out the winning Tigers in the round of 32 as she bested Adelaide Lavery of Tulane in three sets. Komar took an early lead in the first set and went on to win 6-2. Lavery responded with a narrow 6-4 win in the second set and extended the match to a third. In the third set, Komar held off a late charge from the Tulane player to win 6-4 and advance to the next round.

Singles Results – Round of 16
Vishwase played the best singles tennis of her tournament thus far as she swept Jacksonville State’s Anna Syrova, 6-0, 6-0.

LSU had its first defeat in singles on the day as Ole Miss’ Lillian Gabrielsen took down S. Carrington by a score of 6-3, 6-4

Komar punched a ticket to the quarterfinals as she took down Ole Miss’ Reka Zadori in three sets. The Belarus native made quick work of the first set and won, 6-1. Zadori punched back in set two with a narrow 6-4 win to force a third. In the decisive tiebreaker, Komar held off Zadori by a margin of 6-4 and advanced to the next round.

The Tigers ended the day with Cubitt grinding out an intense straight set win over Auburn’s Adeline Flach. Cubitt and Flach went back and forth in the first set, but Cubitt secured two games back-to-back to win the first, 7-5. The second set saw the two Tigers split at 6-6 after twelve games and head to a tiebreaker. In the tiebreaker, the two continued to swap points until Cubitt clutched up and won three straight points to win 13-11 and advance to the quarterfinal.

Up Next
Day Four of the ITA Southern Regional will open with the singles quarterfinals at 10 a.m. CT, followed by quarterfinals in doubles at 1 p.m. CT and semifinals at 2:30 p.m. CT.