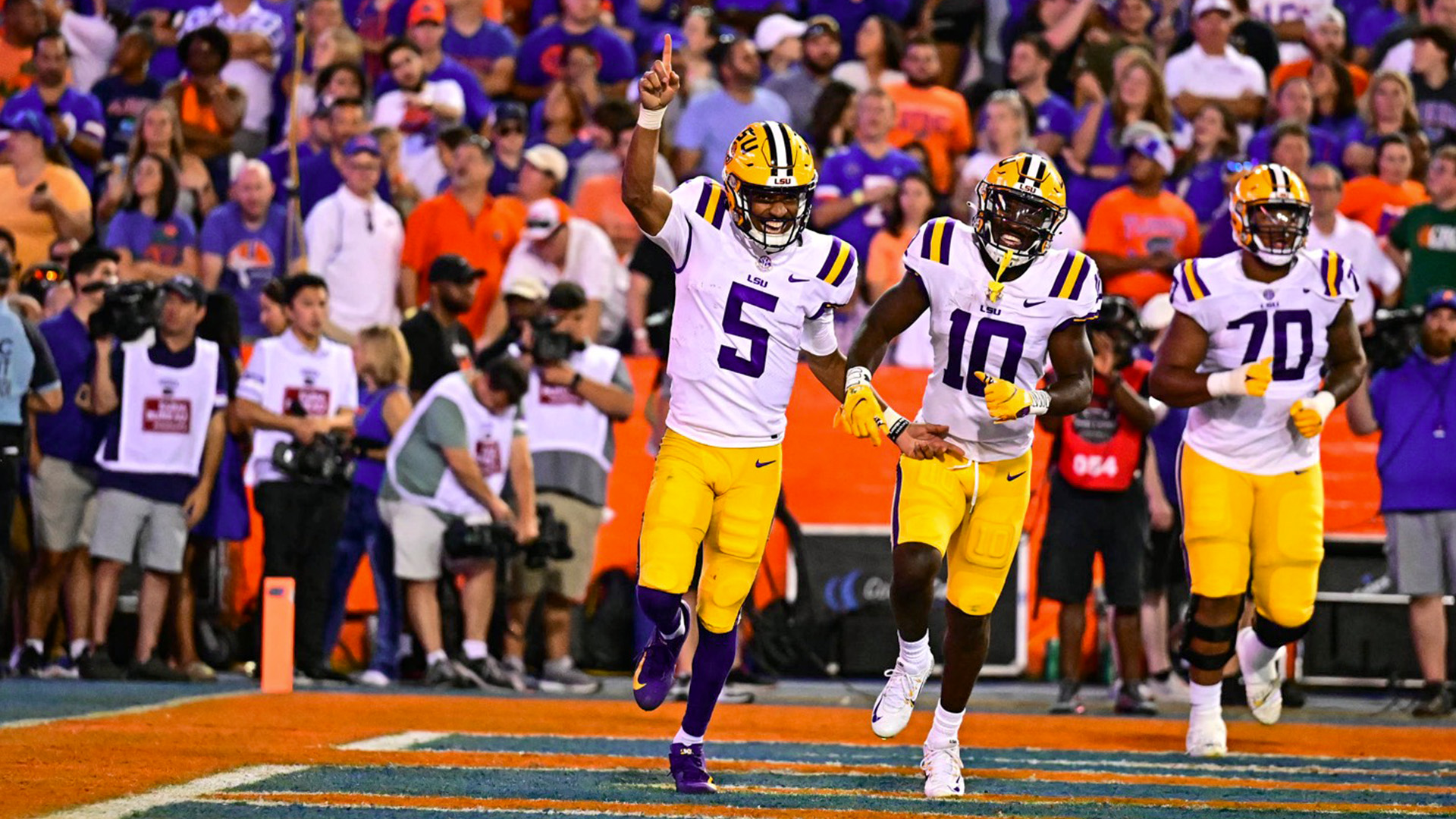 The Tigers return to action next Saturday in Tiger Stadium against Ole Miss at 2:30 p.m. CT on CBS. Tickets are available at LSUtix.net.

Daniels posted a career performance in the Swamp, going 23-of-32 for 349 yards passing and 44 yards rushing. Daniels recorded three touchdown passes through the air and three touchdowns with his legs, joining Joe Burrow as the only LSU players to tally six touchdowns in a single game.

Kayshon Boutte led the offense in receiving with six catches for 115 yards, with a long of 40. Junior running back Josh Williams recorded his first 100-yard game and earned a game ball from Brian Kelly, who became the first head coach to lead LSU to wins at Auburn and at Florida in the same season.

LSU won the toss and deferred to the second half. Trevor Etienne returned the opening kickoff 47 yards to the Gators’ 48-yard line.

Quarterback Anthony Richardson found wide receiver Justin Shorter over the middle of the field for a 51-yard touchdown connection with 14:01 on the clock. Florida led LSU early, 7-0.

Daniels found Emery for a 7-yard touchdown pass to cash in a 12 play, 75-yard scoring drive. The game was tied 7-7 with 7:46 to play in the first quarter.

Running back Montrell Johnson rushed left for a 39-yard touchdown with 2:00 to go in the first quarter to give Florida a 14-7 advantage.

Daniels turned a well-executed drive on offense into points with a 1-yard run for a touchdown with 11:55 on the clock, making it 14-14.

After forcing the first punt of the contest, Jack Bech muffed the punt from Jeremy Crawshaw, which was recovered by Rocco Underwood at the LSU 13. Richardson and the Florida offense  took advantage of the Tigers’ mistake, as Johnson rushed left for a 3-yard touchdown with 8:13 to go in the half. The Gators took the lead, 21-14.

On the next offensive possession, Daniels made the Gators’ pay on a free play from scrimmage, finding Jenkins for a 54-yard touchdown to make it 28-21 Tigers with 2:24 left in the half.

The Tiger defense got a stop before the half, heading into the break with a 28-21 lead.

LSU’s offense picked up where they left off in the second half as Daniels rushed for a 9-yard touchdown to cap off a 1:43 drive, giving the Tigers a 35-21 lead off 21 unanswered points.

The momentum on offense would only continue as Daniels extended the Tigers’ lead to 42-21 with a 9-yard rushing touchdown, marking the sixth touchdown on as many drives for the LSU offense that posted 28 unanswered points.

Florida responded in a big way as Richardson broke open an 81-yard touchdown run to cut the deficit to 42-28 with 14:46 remaining in the game.