Soccer Set To Host No. 4 Alabama 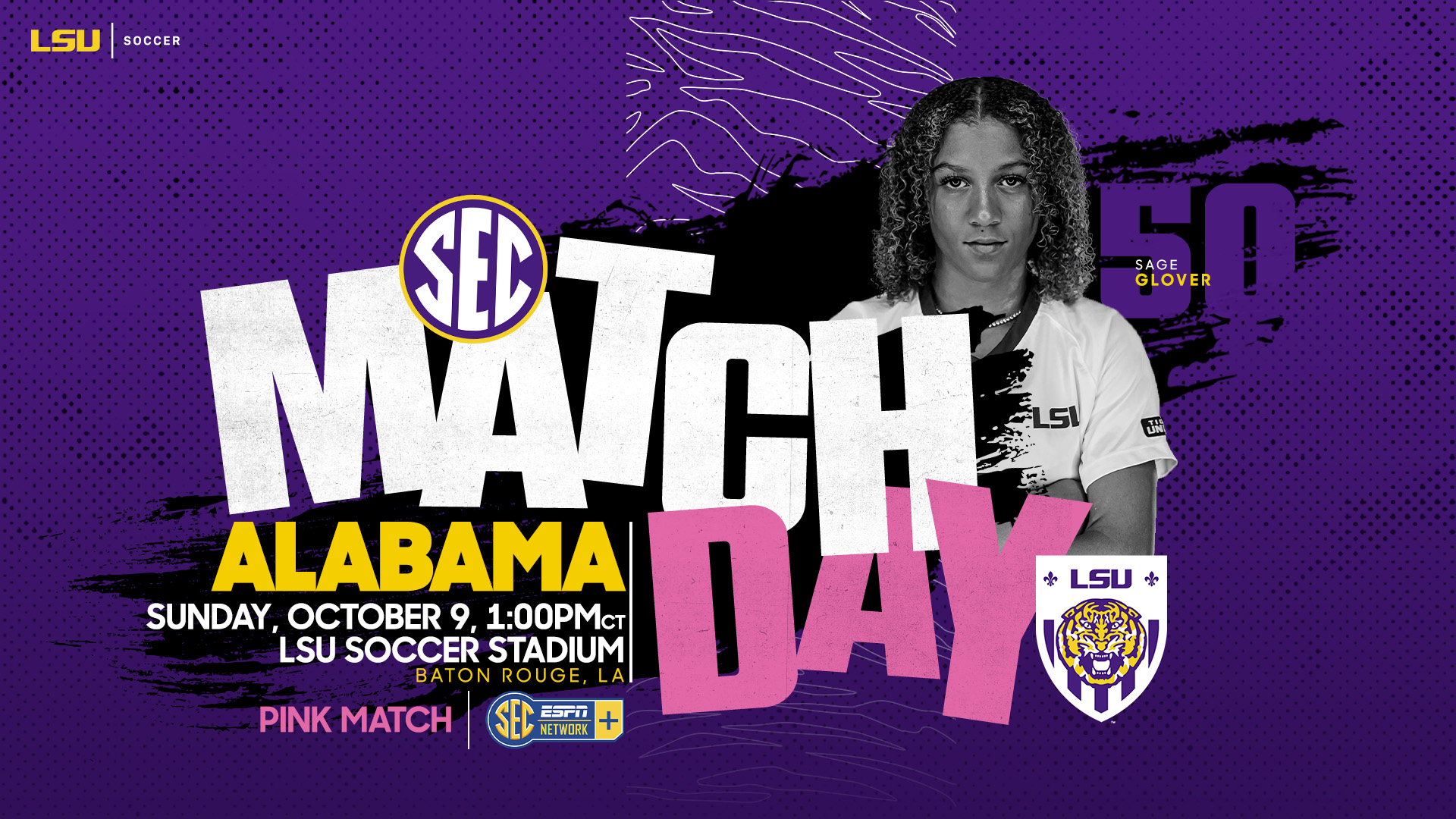 The match will be available through livestream on SEC Network Plus. Links to watch and live stats for the match can be found on lsusports.net.

The first 500 fans to attend Sunday’s match will receive a voucher for a free LSU Soccer Hat at halftime.

Alumni of the LSU Soccer program will be honored at halftime. It is also the pink game in recognition of breast cancer awareness.

In the series history, LSU currently sits at 9-13-6. When the teams last met in 2021 in Tuscaloosa, Alabama grabbed a 1-0 win over the Tigers.

The LSU Tigers earned a point on the road after battling to a 2-2 draw against the Texas A&M Aggies on Thursday in College Station.

Texas A&M opened the match at Ellis Field with a simple goal from nine yards out by Maile Hayes in the 7th minute. The lead was stretched to 2-0 in the 15th minute when Carissa Boeckmann passed to Becerra, who took a touch that beat an LSU defender and sent a powerful shot from 20 yards out and landed in the top-left corner.

LSU found its first goal of the night and cut the deficit to 2-1 in the 27th minute as forward Rammie Noel tallied her first goal of the season. Forward Mollie Baker sent a through ball down the right-hand side to fellow forward Angelina Thoreson. Thoreson drove into the box and sent a ground cross to the back post that found Noel, who tapped the ball in. For the assists, Thoreson’s team-high total rose to seven on the year while Baker’s increased to four.

Swift was called into action in the 27th and 32nd minutes as she kept the Tigers in the match. The match headed into the halftime break with the Aggies holding a 2-1 lead on the night.

LSU opened the second half with energy and grabbed a penalty kick only a minute in. Hermannsdottir latched onto a pass in the final third and pushed into the box before she was upended by a Texas A&M defender. The referee pointed to the penalty spot and Hermannsdottir stepped up and drilled it left and into the back of the net. The Icelandic international tied the match at 2-2 and the goal was a team-high number six on the year for Hermannsdottir.

The two teams battled it out throughout the second half, but neither could find a go-ahead goal and the match finished at a 2-2 draw. Texas A&M goalkeeper Kenna Caldwell had saves in the 64th, 66th and 83rd minute to deny the Tigers while Swift did not face any shots on frame in the second half. Caldwell finished the night with six saves while Swift had two.

Freshman Ida Hermmansdottir took the lead as the leading scorer for the Tigers after Thursday’s match against the Aggies. Hermannsdottir tallied her sixth goal of the season in College Station.

Hermmansdottir found her first collegiate goal in the 33rd minute against San Diego and has been hot since. Her second and third career goals came against Grambling in the 27th and 82nd minutes to earn the first brace of her collegiate career. As the match was all-even at 1-1 in the first half, Hermannsdottir led LSU to a 2-1 lead with a superb long-range effort just three minutes after her teammate Mollie Baker equalized the game. The freshman scored the final goal in the 82nd minute after shrugging off a defender and slotting a ball past the Grambling State goalkeeper.

The fourth goal of her career came at No. 6 Rutgers, when she intercepted a ball in the final third and hit a right-footed effort that beat the Scarlet Knights’ goalkeeper and landed in the bottom left corner.

Goal number five came in her SEC debut at Vanderbilt as she hit a free-kick from 25 yards out that was powerful enough to beat the diving goalkeeper and land in the bottom-left corner. The goal was the game winner for LSU, who won 2-1 on the day.

Hermannsdottir’s sixth career goal came in the Tigers last matchup against Texas A&M in College Station when she nailed a penalty kick to even the match at 2-2 and earn the point on the draw.

After scoring three each in non conference play, forwards Mollie Baker and Sage Glover both found the back of the net in SEC play for the first time in their collegiate careers in Sunday’s win versus Kentucky.

Freshman Baker and Glover are tied as the third leading goal scorers with four each. Fifth-year senior Alesia Garcia is the second leading goal scorer on the squad with five, sitting behind Hermannsdottir who has six. Of LSU’s 31 goals scored this season, 12 have come from true freshmen (38.7%) while another 12 goals have come from 5th year seniors/graduate students.

Fifth year senior Lindsi Jennings opened SEC play in strong form, contributing to LSU’s success both in defense and on the scoresheet. Captain and center back Lindsi Jennings has scored two goals in back-to-back SEC matchups for the Tigers. Jennings is sixth in the SEC with two goals in five conference matches.

Jennings first goal of the season came in Nashville when the Tigers opened up conference play with a 2-1 victory against Vanderbilt on Sunday, September 18.

LSU opened the game on the front foot against Vanderbilt and were rewarded with a goal just 13 minutes in. After a corner was sent in, the ball fell on the left side of the box to fellow center back Shannon Cooke. Cooke took a touch and sent a cross to the back post that found Jennings, who headed home the ball into the back of the net.

Jennings second goal of the season came in the Tigers last matchup against Missouri on Thursday. Following an initial cross into the box on the corner, Baker took possession of the ball on the right side of the box. She cut inside on her left foot and lofted a cross to the back post and found Jennings, who headed the ball past the goalkeeper and into the back of the net.

The goal gave LSU a 2-1 lead and Jennings tallied her second goal in two straight games. Baker’s vital assist was her second of the season.

Jennings’ goal against Missouri secured the win for the home Tigers and moved LSU to 2-0 in conference play.

The freshman continued her tally of assists against Kentucky. Thoreson sent a ground cross on a first-time effort to find Sage Glover, who scored in the 34th minute to give the Tigers the 2-1 lead against the Wildcats. The assist increased Thoreson’s team-high total on the year to six.

The forwards six assists rank sixth in the country through 13 games played.

LSU has won 18 matches and drawn 11 matches against nationally-ranked opponents in program history.

Under head coach Sian Hudson, LSU has played in 11 ranked matches and have been competitive in all of them. The five wins under Hudson come from No. 14 Ole Miss, No. 15 USF, No. 19 UCF, No. 21 Arizona State, and No. 4 Arkansas.

Two tough one-goal losses came against No. 8 Texas A&M in the fall of 2020, a one-goal loss to Arkansas at the 2021 SEC Tournament, and two overtime losses to ranked Auburn teams. LSU’s last draw against a ranked opponent came in August when the team drew 2-2 at No. 14 Pepperdine.

LSU sits in fourth place in the SEC with five games remaining on the conference schedule. The top 10 teams in the league advance to the conference tournament which will take place from October 30 – November 6 in Pensacola, Fla.

The Tigers have earned 10 points in conference play this year and rank fifth in the SEC West division. The two division champions will serve as the top two seeds at the SEC Tournament, and the final eight teams are decided by points accumulated in conference play.