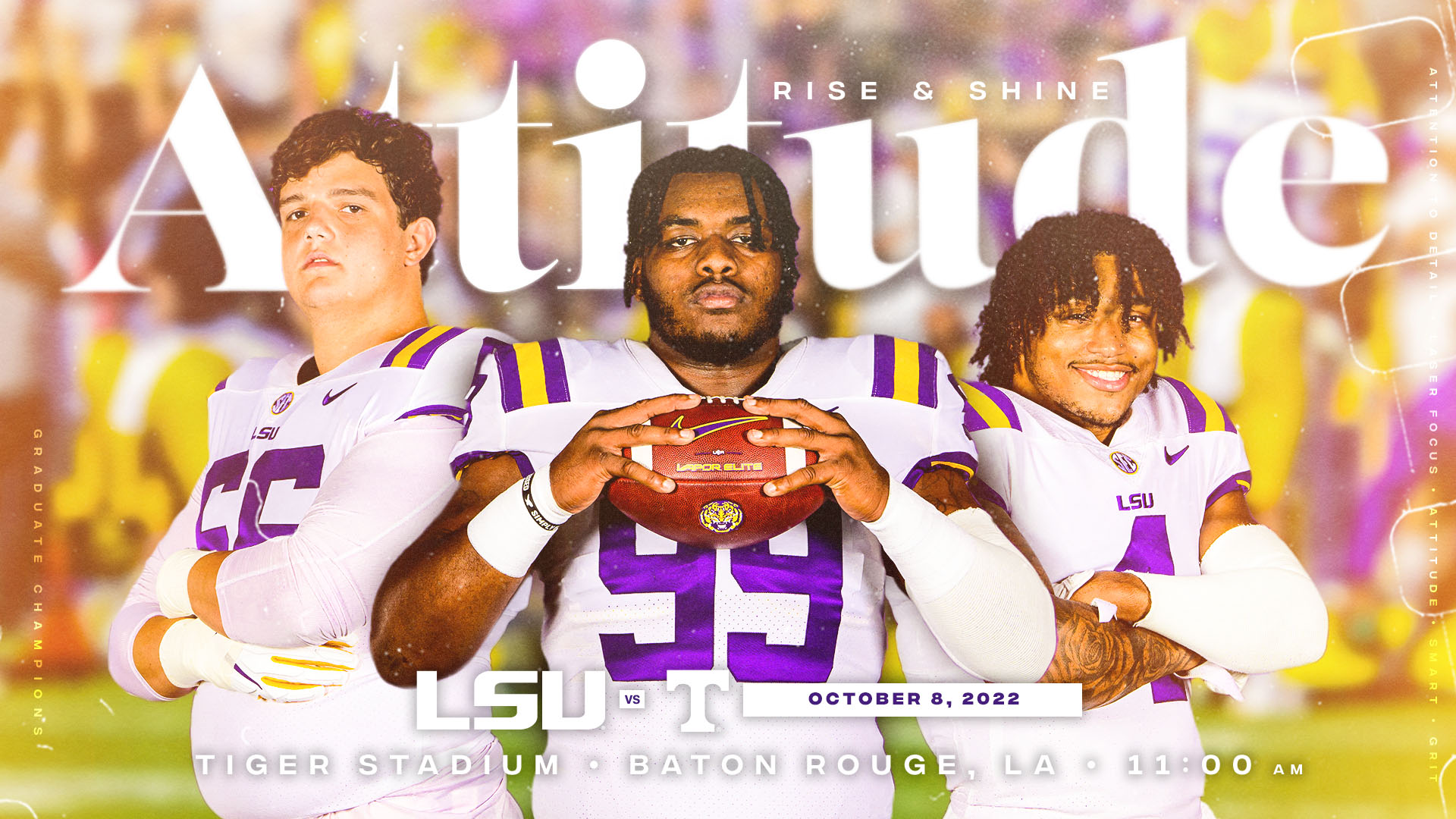 Kickoff is set for 11:02 a.m. CT on ESPN and the LSU Sports Radio Network.

It will mark the first time both LSU and Tennessee enter the matchup ranked in the Top 25 since the 2007 SEC Championship Game when the No. 5 Tigers topped the No. 14 Vols, 21-14.

History is a Hell of a Thing

“To go on the road, be down 17-0 and come back and win, that means your program is establishing character within the ranks and that, to me, puts you on the right path,” Kelly said.

Showing resilience and grit alone, however, won’t win you games against top-10 opponents in the SEC. Better execution, better coaching, Kelly says, combined with resilience and grit – that is a winning combo. Playing for four quarters and starting fast will be key for the Tigers on Saturday.

“It’s pretty clear this team plays with great heart and they will fight,” Kelly said. “But heart and fight will not win games against the opponents that we’re going to have to face over the next month or so.”

The running backs will look to build off last week’s success, rushing for 185 yards against the Auburn defense. Junior Josh Williams led the attack with 68 yards for an average of four yards per carry as senior John Emery scored a tough touchdown to give LSU the lead late in the third quarter.

BJ Ojulari won SEC Defensive Lineman of the Week, the league office announced on Monday. That’s Ojulari’s second honor this season after recording four tackles and a forced fumble, which was returned for a touchdown by senior safety Jay Ward to jumpstart LSU’s comeback.

“I told him that was a captain’s play,” Kelly said. “That was an effort play, a timely play, that gave us the life we needed at that particular time. A leader like BJ made a play when a play needed to be made.”

LSU will look to get their talented receivers more involved too, recording just 85 yards passing Saturday, albeit in a winning effort.

Tennessee is led by senior quarterback Hendon Hooker, who has thrown for 1,193 yards passing for eight touchdowns and zero interceptions. Jalin Hyatt leads the Volunteers in receiving with 325 yards and three scores, averaging 14.1 yards per touch through four games this season.

“Josh Heupel has done a great job in a very short period of time of putting his stamp on this team,” Kelly said. “It’s a fast-paced team. They are the fastest team in college football. (Hooker) is talented. He’s big, physical, he can throw the football, and he’s got playmakers.”

We're in The Lounge with @JayD__5 pic.twitter.com/EdnUdAYTBA

It will be unusual territory when the Tigers take the field on Saturday morning, marking the 15th 11 a.m. kickoff in the history of Tiger Stadium. That shouldn’t be an excuse, Kelly says, with a top-10 team coming to Death Valley. It’s still LSU football. It’s still Tiger Stadium.

Be loud, be proud and make your presence felt.

“It’s Tiger Stadium,” Kelly said. “It’s LSU football. If you’re not excited for that, I don’t know what gets you going. LSU is playing Tennessee in Tiger Stadium … tell me what else is better to do.”