Gymnastics is fun again for senior Cammy Hall, who hopes to make a big impact upon the LSU program in 2023. 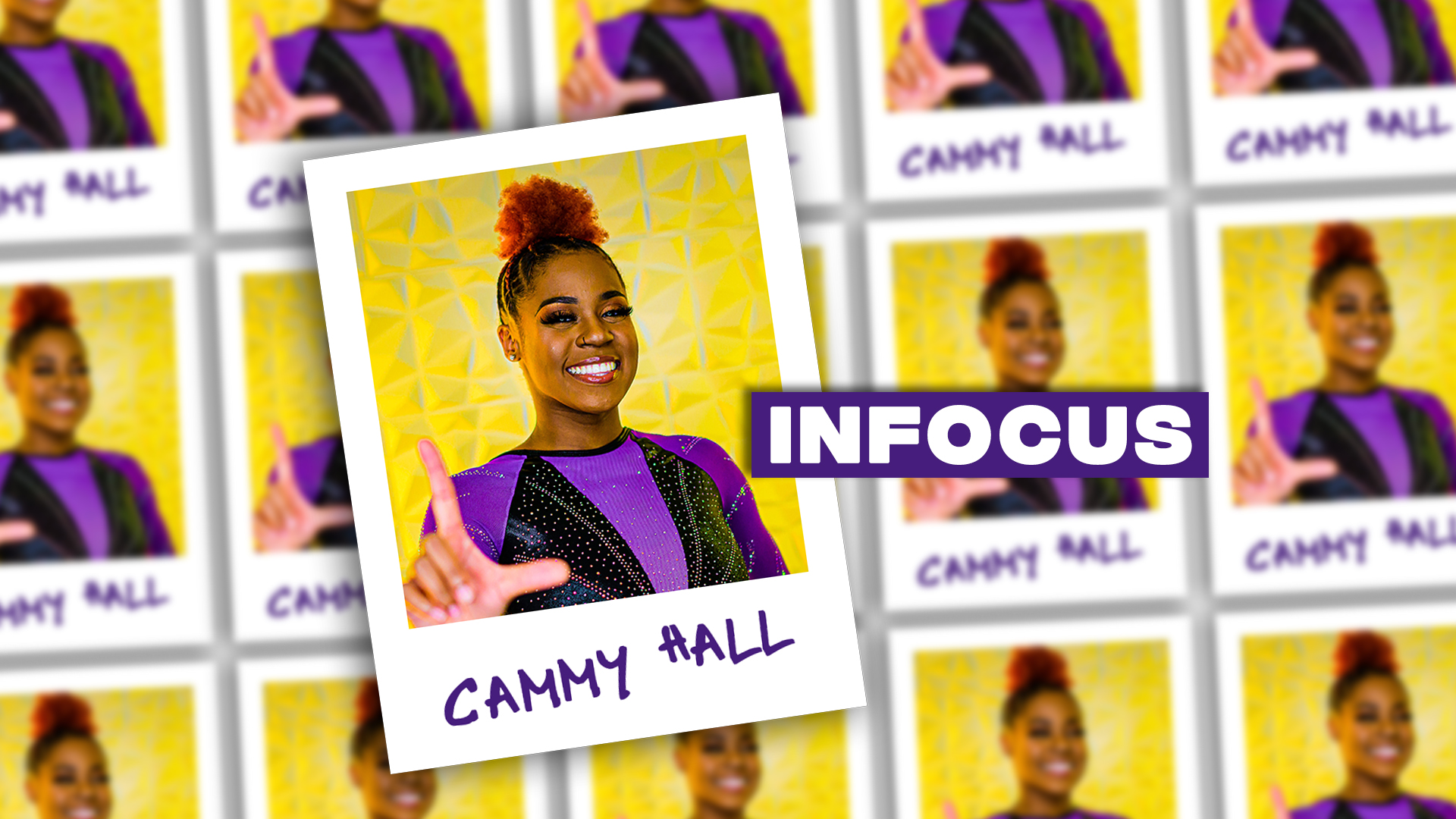 When you’re a kid, you just want to have fun. It comes naturally; your innocence and imagination take flight, and pure bliss is all you know.

Quietly, without you noticing, the innocent joy fades. Time replaced it with pressure, competition and ignorance of how it used to be.

Fifth-year senior Cammy Hall first found gymnastics when her 3-year-old self was simply having fun at a friend’s birthday party. The coaches running the birthday party asked her parents how much experience she had in gymnastics, a question which her mother answered plainly.

“My mom was like, ‘None. She is 3,’” Hall recalled. “The coaches recommended my parents put me in classes, and it has been almost 19 years now.”

Once she reached middle school and others realized her potential, Hall started taking her training more seriously. In high school, she endured the somewhat awkward recruiting process, initially committing to the University of Maryland as a junior. Hall’s course was diverted when one of the University of Utah coaches saw her at a meet, and offered her a spot.

Upon arrival as a freshman at Utah, Hall feared she would be the weakest link that held the team back. She pushed herself hard, and started seeing improvements in her strength and skill. As she was tumbling, Hall ended up tearing her Achilles tendon right before her rookie season began.

“I was so excited, doing better and was more prepared for the season than ever,” Hall said. “I was so crushed, hopeless and really thought this could be the end. I’m naturally happy all the time, so it was really hard because my true self was so sad. Everything was falling apart when it was supposed to be coming together.”

Hall displayed her resiliency by using her disappointment and sadness to drive her in rehabilitating the injury. She made it back within seven months, which is ahead of schedule for an Achilles tear. Her physical state was repaired, but perhaps it was nothing compared to the mental anguish that was coming.

At the NCAA Championships during her last season, the team placed third overall, but Hall was unable to stick her vault and end on that high note she dreamed of.

“I cried for about four days,” Hall admitted. “ With some time, I realized it didn’t define me. Gymnastics isn’t forever, and I was coming to terms with the fact that I could start working and doing other things with my life.”

Hall moved home after graduation, and started coaching for a local club team. Some of the little girls, who were still in the innocent phase of doing gymnastics for fun, began asking Hall difficult questions.

Hall’s immediate response: “Get on the bar.”

After some reflection, Hall entered the transfer portal, already knowing where she wanted to spend her final season. Current LSU assistant coach Garrett Griffeth previously coached at Utah, and his departure from Salt Lake City was devastating for Hall. His ability to care for the gymnasts as human beings set him apart, and Hall craved that feeling again since the day he left.

Hall had also competed in the PMAC before, in awe of the atmosphere and the other facilities. A FaceTime call with Garrett turned into a FaceTime with LSU head coach Jay Clark, who quickly scheduled a recruiting visit for Hall. That was all it took, and she was officially a Tiger.

“I have loved it ever since I stepped on campus,” Hall said. “The team welcomed me with open arms, and I couldn’t be happier. It’s been a complete 180, and my only regret is that I didn’t transfer earlier. If you told me last year that I was going to do a fifth year, I wouldn’t have believed you. It feels like a family here.”

Despite the obstacles in her path, Hall recognizes how important all of her gymnastics experiences have been in her development as an individual. With a former collegiate basketball player as a father, her family knew the opportunities and life lessons that sports provide.

“Gymnastics has taught me so much that I can use outside of flipping,” Hall explained. “The discipline and maturity from gymnastics apply to life outside of it. I have learned to be patient, give myself time, treat myself and push myself in a healthy way.”

Hall at times felt like she was trapped in a dark, gymnastics-centered bubble that would never burst. Now, she sees how both the good and the bad times as a student-athlete have positioned her to achieve the utmost success in her future.

“Being a student-athlete leads to more opportunities,” Hall said. “A lot of jobs look for student-athletes because it takes a certain type of person. It takes grit.”

Grit is synonymous with Hall. She had competed where the mindset was, “Nobody cares. Do your gymnastics.” Becoming a Tiger changed that, and brought her back to her roots as the little girl who wanted to have fun.

“People here care about you; what’s affecting you inside and outside of the gym,” Hall said. “They invest in us as people and as athletes, and the experience has been amazing so far.”

After her final season, Hall hopes to become a coach, where she can ensure her girls never lose sight of what keeps their fire lit.

“For my girls, I want to be the coach I needed when I was younger,” Hall said. “They helped me fall back in love with the sport again. It shouldn’t be complicated; it should be fun.”