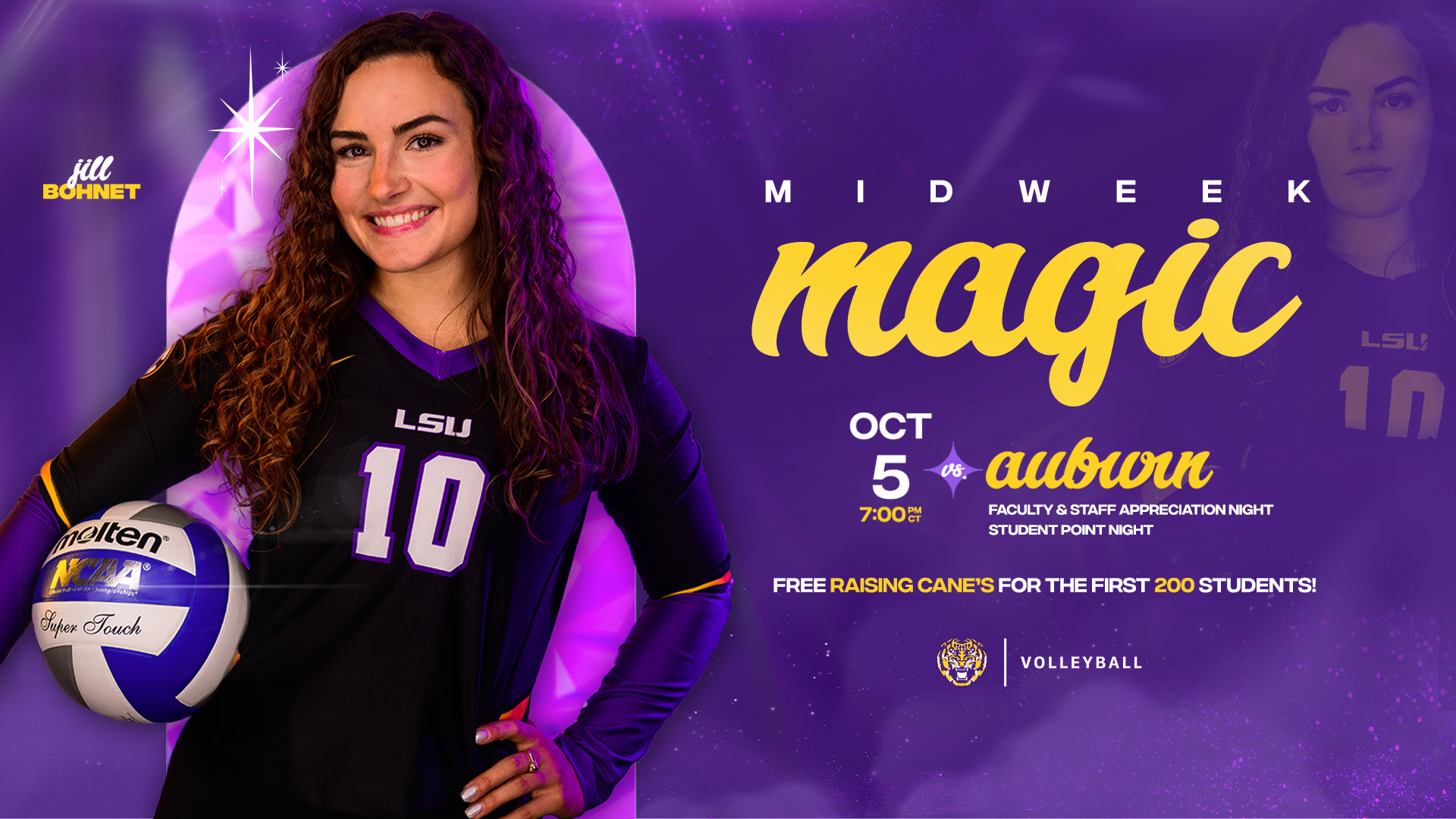 BATON ROUGE, La. – The LSU volleyball team is set for a midweek match against an unbeaten Auburn club at 7 p.m. on Wednesday, October 5 at the Pete Maravich Assembly Center. The match will be televised on SEC Network.

LSU (9-6, 3-2 SEC) has been dubbed winners in five of its last seven contests and are coming off a weekend split against Ole Miss. The Tigers are hitting .254 on the season behind 13.16 kills per set and 12.22 assists per set. LSU leads the SEC with 763 total kills and sits at No. 2 with 709 total assists. The LSU defense has allowed its opponents a .200 hitting percentage this season and has held teams under a .200 attacking percentage eight times this season. The Fighting Tigers also average 2.07 blocks per set and 14.50 digs per set (No. 4 in SEC) this season.

Outside hitter Sanaa Dotson ranks No. 5 in the SEC with 3.91 kills per set and her 227 total kills is the second-most in the league. Dotson also ranks No. 9 in the conference with 4.36 points per set and leads the team with 13 aces. Other top hitters for the LSU Tigers consist of outside hitters Samarah Hill (2.52 kills/set), Paige Flickinger (2.44 kills/set) and Hannah Jacobs (2.34 kills/set).

Middle blocker Anita Anwusi leads LSU at the net and ranks No. 9 in the SEC with 1.09 blocks per set (94 total), and No. 6 in the league with 1.26 blocks per set in conference-only matches. Anwusi also has 102 total kills on the year.

Libero Ella Larkin anchors the defense with a league-high 4.41 digs per set (256 total) and has accumulated two 30-plus dig performances this season.

Auburn (14-0, 3-0 SEC) is one of four undefeated teams remaining in all of NCAA Division I volleyball. Auburn is coming off a weeklong hiatus after pulling out a five-set victory against Mississippi State on Sept. 28. AU opened league play with a pair of four-set wins against in-state rival Alabama Sept. 24-25. Auburn has a balanced attack up to this point in the season. They have a .277 hitting percentage, while holding opponents to a .147 hitting percentage behind 2.72 blocks per set. Each of those marks are the second-best in the SEC as well as their 1.87 aces per set.

Outside hitter and this week’s SEC Co-Freshman of the Week Akasha Anderson is Auburn’s top offensive threat with 3.52 kills per set and chips in 22 total blocks. Other standout players for AU are setter Jackie Barrett who ranks No. 2 in the SEC with 10.27 assists per set, Sarah Morton who ranks second in the league with 4.26 digs per set, and middle blocker Kendal Kemp who ranks third in the conference with 1.42 blocks per set (No. 17 in NCAA).

LSU has dominated the all-time series against Auburn 47-15 and enters Wednesday’s match on a six-match winning streak highlighted by four consecutive sweeps.