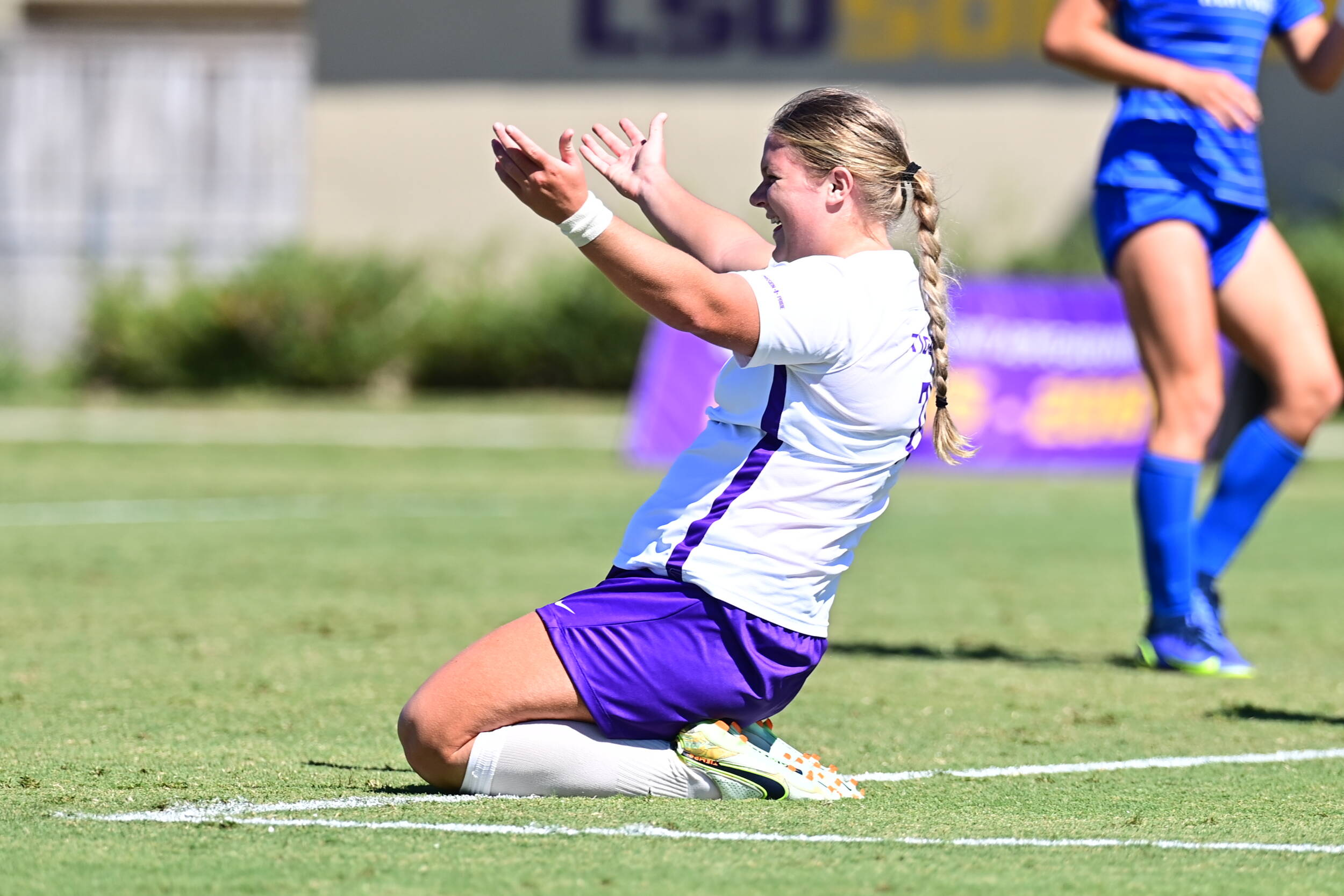 The Tigers conceded early in the first half to Kentucky’s Jordyn Rhodes. LSU responded just two minutes later when co-captain Shannon Cooke slotted home a penalty kick into the bottom left-hand corner past Kentucky’s Tallulah Miller. The Tigers took their first lead of the match in the 34th minute as Sage Glover tucked away a goal into the bottom-right corner.

Kentucky equalized in the 48th minute to start the second half on a goal from Úlfa Úlfarsdóttir. Mollie Baker found the back of the net for the Tigers just ten minutes after on a breakaway goal to take a 3-2 lead and give LSU the win on the day.

“It felt good to get another win,” head coach Sian Hudson said. “Getting three wins at this point in the SEC is creating a lot of confidence in the team. The team had a great response to going down early and finishing the game strong. We talked a lot this week about a response to Mississippi State loss and who we are as a team and today we proved that.”

The match opened with neither team able to take control and create chances. The Wildcats had the first big chance of the match in the 6th minute as Úlfarsdóttir sent a shot on goal from the top of the box, but the shot was easily collected by LSU goalkeeper Mollee Swift.

Kentucky took a 1-0 lead in the 25th minute as Hannah Richardson took a corner kick, which swung a cross to the back post and found the head of Rhodes and landed in the left side of the goal.

Only two minutes later, LSU had a free kick in their own half. The ball was lifted into the box, where a Kentucky player’s attempt to clear it saw the referee blow the whistle and award a penalty due to a high kick. Cooke stepped up for the Tigers and slotted the penalty kick into the bottom-left corner, beating the Wildcat goalkeeper on power. The match was tied at 1-1 and Cooke had her first goal of the season.

Locked It In. Found The Equalizer.

LSU found its first lead of the match in the 34th minute. Following a strong possession play, Baker sent a through ball on the edge of the box to forward Angelina Thoreson, who then sent a ground cross on a first-time effort and found Glover. Glover sent the shot into the top-right corner and recorded LSU’s second goal of the day. Glover’s goal was her fourth of the season and first goal in SEC play. Thoreson’s assist increases her team-high total on the year to six while Baker’s was her third on the year.

The Tigers take the lead!

The Tigers took a 2-1 lead into halftime, but a strong start for Kentucky in the second half saw the Wildcats tie the match at 2-2 in the 48th minute. A cross was sent into the box and the LSU defense was not able to clear the ball. The ball was in the air in front of goal and was met by the head of Úlfarsdóttir, who beat Swift and placed it in the goal.

LSU overcame the slow start to the half and chased for the equalizer. Baker sent a shot on goal in the 49th minute that was saved by Kentucky’s goalkeeper Tallulah Miller, her first of the day.

The go-ahead goal came in the 58th minute for the Tigers. Defender Lindsi Jennings cleared the ball up to the middle of the pitch. A Kentucky defender could not properly connect on her header and the ball went past her and into the Wildcats’ side of the field. Baker pounced on the loose ball and carried it into the box to finish a one-on-one chance with a strong shot that landed in the left-corner. The goal gave LSU a 3-2 lead on the day while Baker had her fourth goal of the year and first in SEC play.

Turned on the turbos 💨

This is what happens when you give Mollie Baker space.

The Tigers held control of the match the rest of the way. Midfielder Jordan Johnson had a shot on goal saved in the 58th minute and Baker tested Miller in the 86th minute with a shot that required goalkeeper intervention. Miller finished the day with three saves. For LSU, Swift made calm saves in the 60th and 89th minutes that kept the score line at 3-2. Swift finished the match with four saves.

Kentucky could not find an answer as LSU secured its third conference win of the year. LSU outshot Kentucky by a margin of 13-8, with both teams finishing with six shots on targets. LSU claimed the possession battle by a margin of 56% to 44%. Following the go-ahead goal, LSU’s defense and midfield took control of the match and the Wildcats’ chances were limited in terms of quality and quantity.

LSU hits the road to take on the Texas A&M Aggies at 6 p.m. CT on Thursday, October 6 on SEC Network.