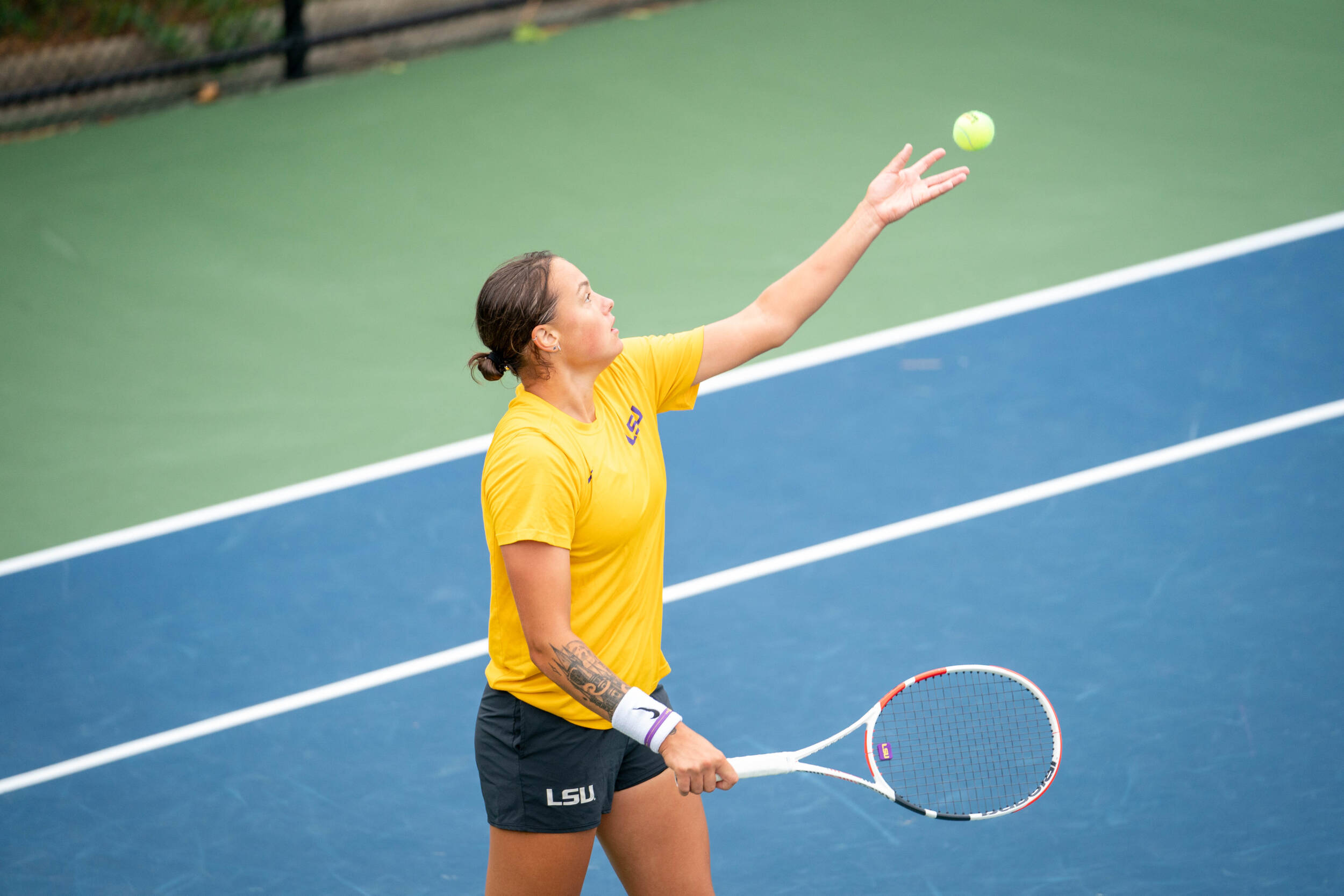 Cary, N.C. – The LSU women’s tennis team had two singles players and one doubles duo advance to the qualifying stages of the ITA All-American Championships on Sunday. Safiya Carrington and Anastasiya Komar punched their tickets to the next stage of the tournament in singles while Komar and Nikita Vishwase advanced in doubles.

Singles Results
Two rounds of singles play were on the schedule for Sunday. Komar faced Auburn’s No. 91-ranked Carolyn Ansari in her first matchup of the day. Komar opened with strength and won the first set by a margin of 6-3. The second set was a close match and was split at 6-6 after 12 games. The tiebreaker played out like the set with neither player able to pull ahead. Komar held her nerve and finished strong to grab a 7-5 win and secure a straight set win. Komar’s win was her fourth of the fall and came against a player who was named to the All-SEC First Team in the spring.

Carrington drew Whitley Pate from Wake Forest in her second-round match. Carrington edged out Pate by a close margin of 6-4 in the first set before emphatically claiming the second, 6-1, to grab a straight set win and a spot in the next round.

The second round of the day was the final for pre-qualifying and each match had a spot in the qualifying stages on the line. Komar took on Bridget Stammel of Vanderbilt. The match was a tight affair, with Komar narrowly edging her opponent in an extended 7-5 first set. The second set was just as close, with Komar able to hold off the Commodore player and grab a 6-4 win to advance to the qualifying rounds.

Carrington drew Wisconsin’s Taylor Cataldi. The two players played an even first set, with Cataldi narrowly edging the LSU Tiger by a score of 7-5. The second set saw Cataldi hold off a surge from Carrington to win 6-3 and advance to the next stages of the tournament. While Carrington was defeated, she was named the “lucky loser” by the ITA to replace a withdrawing player and will play in tomorrow’s qualifying round.

Doubles Results
Komar and Vishwase took on the duo of Filippa Bruu-Syversen and Amelia Horner from UC Santa Barba in the final round of doubles pre-qualifying. The Tiger duo opened the match well, but Horner and Syversen were able to pull away and win by a score of 8-4. Similar to Carrington in singles, Komar and Vishwase were named “lucky losers” by the ITA and were awarded a spot in the qualifying rounds tomorrow.

Up Next
Day one of the ITA All-Americans Qualifying is set to start at 9 a.m. CT tomorrow. Carrington and Komar will play a round of singles while two rounds of doubles are set to be played. Carrington will pair with Kylie Collins while Komar and Vishwase are also set for qualifying action.