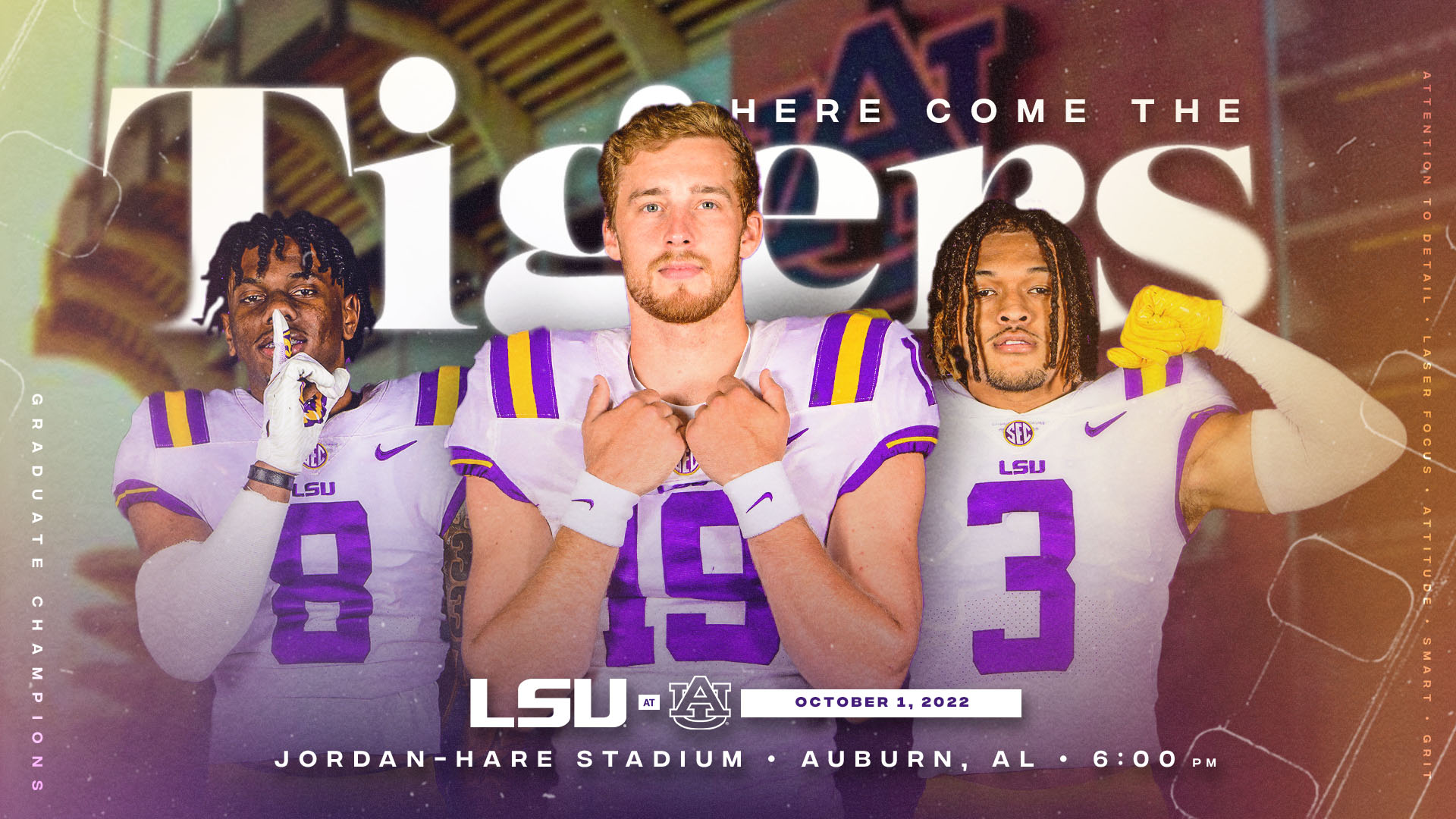 Riding three consecutive wins, LSU (3-1) travels to the Plains for the first true road game of the season against Auburn (3-1) on Saturday night.

It’s a series that’s had some wire-to-wire finishes, an Earthquake, a Barn Burner and much more in between – expect the unexpected when these two programs meet. Saturday marks the next chapter in this storied rivalry.

It was an efficient day at quarterback last Saturday for LSU as Jayden Daniels and Garrett Nussmeier combined to go 33-of-39 (85.0%) passing against New Mexico. Daniels left the game with a lower back injury, but could have went back into the game if the coaching staff felt it was necessary.

With four starts in purple and gold now under his belt, Daniels is feeling more comfortable and confident, Kelly says, with less second-guessing and more trusting within his progressions in the pocket.

“Decisiveness is starting to be a part of the vocabulary instead of being hesitant, and that comes with knowledge of the offense,” Kelly said of Daniels, set to make his first SEC road start. “He’s become a lot quicker in his set up, slowing down and not rushing through progressions.”

Brian Thomas caught three passes for a team-high 76 yards and a score, taking a screen pass from Nussmeier 57 yards. Jack Bech debuted as LSU’s punt returner in style, taking a 76-yard return for a touchdown, ultimately negated by a blindside block penalty.

“Fearless,” Kelly said of Bech. “He’s at his best when he’s not worried about any factors other than competing and getting the ball in his hands, and it’s fun to watch.”

“It is what it is,” Bech added on his punt return. “That’s life. It was fun, though. Returning punts is one of the cooler things – it’s just you back there, getting to take in the atmosphere and energy of the stadium. I’m somebody that likes to run off energy.”

Senior Jaray Jenkins added five receptions for 57 yards. Jenkins will provide the Tigers some leadership heading into a hostile road environment. He’s done it the right way from start to finish, Kelly says, and he’s been a model student-athlete for everyone on the team to emulate.

“He’s gone about this year in a manner that can be modeled by all of our other guys,” Kelly said of Jenkins. “He’s quietly put together as consistent of a performance as anybody on our team.”

Perfect Day on The Plains pic.twitter.com/bovfzgm77G

The Tigers will get some reinforcements in the secondary as transfer safety Joe Foucha will make his LSU debut on Saturday against Auburn. Foucha started 33 games in the secondary for Arkansas and joins the Tigers with 231 career tackles, 11.5 tackles for loss, 17 pass breakups and 5 interceptions.

Auburn is led by one of the nation’s premier running backs in Tank Bigsby, who has recorded 281 yards on 57 carries for four touchdowns, averaging 4.9 yards per touch.

The Tigers have enjoyed playing in front of a partisan crowd of purple and gold the last three weeks, but on Saturday night, it will be partisan for the Tigers of Auburn University.

“I think we made it pretty difficult to practice this week with crowd noise,” Kelly said. “But, I think you all know the best way to keep a crowd quiet is to play really well on offense. That’s what we look to do.”