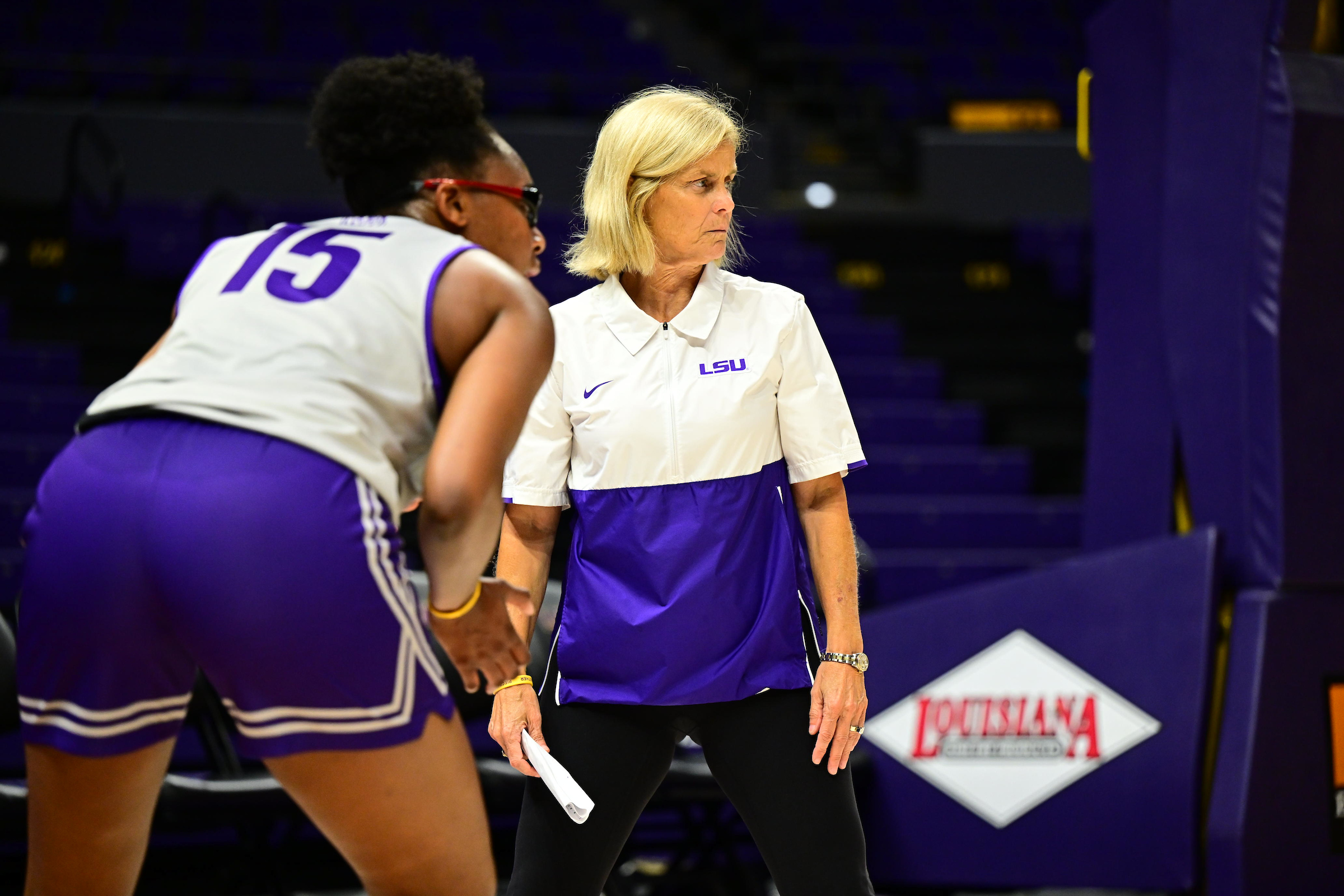 BATON ROUGE – Kim Mulkey and the LSU Women’s Basketball team held their first official practice ahead of the 2022-23 season Monday in front of nearly 500 LSU fans on the main floor of the PMAC.

LSU is set to begin its season on November 7 when it hosts Bellarmine to kick off its season. The Tigers will also host two exhibitions that will be free to attend on October 27 against Mississippi College and on November 3 against Langston. Season tickets for the 2022-23 season are still available and fans are encouraged to join the Fast Break Club, the official booster club of LSU Women’s Basketball, to support the Tigers on and off the court.

“Our theme for the year is ‘Piece it 2gether’ and the two obviously is signifying our second year at LSU,” Coach Mulkey said prior to practice. “We have a lot of talent on the floor, but we’ve got to piece it together. We have kids coming from other programs, high school kids stepping on campus for the first time, we have returning players who will have to play different roles. We have to piece it together and that takes time.”

Monday’s practice was the first opportunity to see the new-look-Tigers who added an elite group of nine players during the offseason. LSU lost nearly 80-percent of its offensive production from last season as guards Alexis Morris (15.0 ppg) and Ryann Payne (5.6 ppg) are the only returning players that averaged over five points per game a season ago.

Morris is the only starter from last year’s team to return as Coach Mulkey’s second roster at LSU will look much different than her first season at LSU. The Tigers will look to replace to production of All-America guard Khayla Pointer as well as other starters Faustine Aifuwa, Jailin Cherry and Autumn Newby. LSU was 26-6 last season as Coach Mulkey led the greatest turnaround by a first-year head coach in SEC history and she was named AP National Coach of the Year.

Coach Mulkey and her staff added nine newcomers, including the top player in the transfer portal in forward Angel Reese (from Maryland) and the top JUCO transfer in the country in Australian guard/forward Last-Tear Poa (from Northwest Florida State College). LSU also added sharp-shooting guard Jasmine Carson (from West Virginia) and an established post player with SEC experience in LaDazhia Williams (from Missouri). Kateri Poole (from Ohio State), a former five-star prospect out of high school, rounds off the list of incoming transfers. Poole has experience playing in a packed PMAC as she was on the Ohio State team that knocked LSU out of the NCAA Tournament.

The freshmen class will also have an opportunity to prove themselves this season. Flaujae Johnson was the No. 26 player in last year’s signing class according to ESPNW. She is a dynamic guard who can score at multiple levels who is also a rap star that has a record deal with Jay Z’s Roc Nation. Sa’Myah Smith is the top player out of Dallas who led her DeSoto High School team that was loaded with DI talent to back-to-back Texas 6A State Championships as a junior and senior. Alisa Williams is another top player out of the Dallas area and Izzy Besselman is a local Baton Rouge product who joined the team as a walk-on.