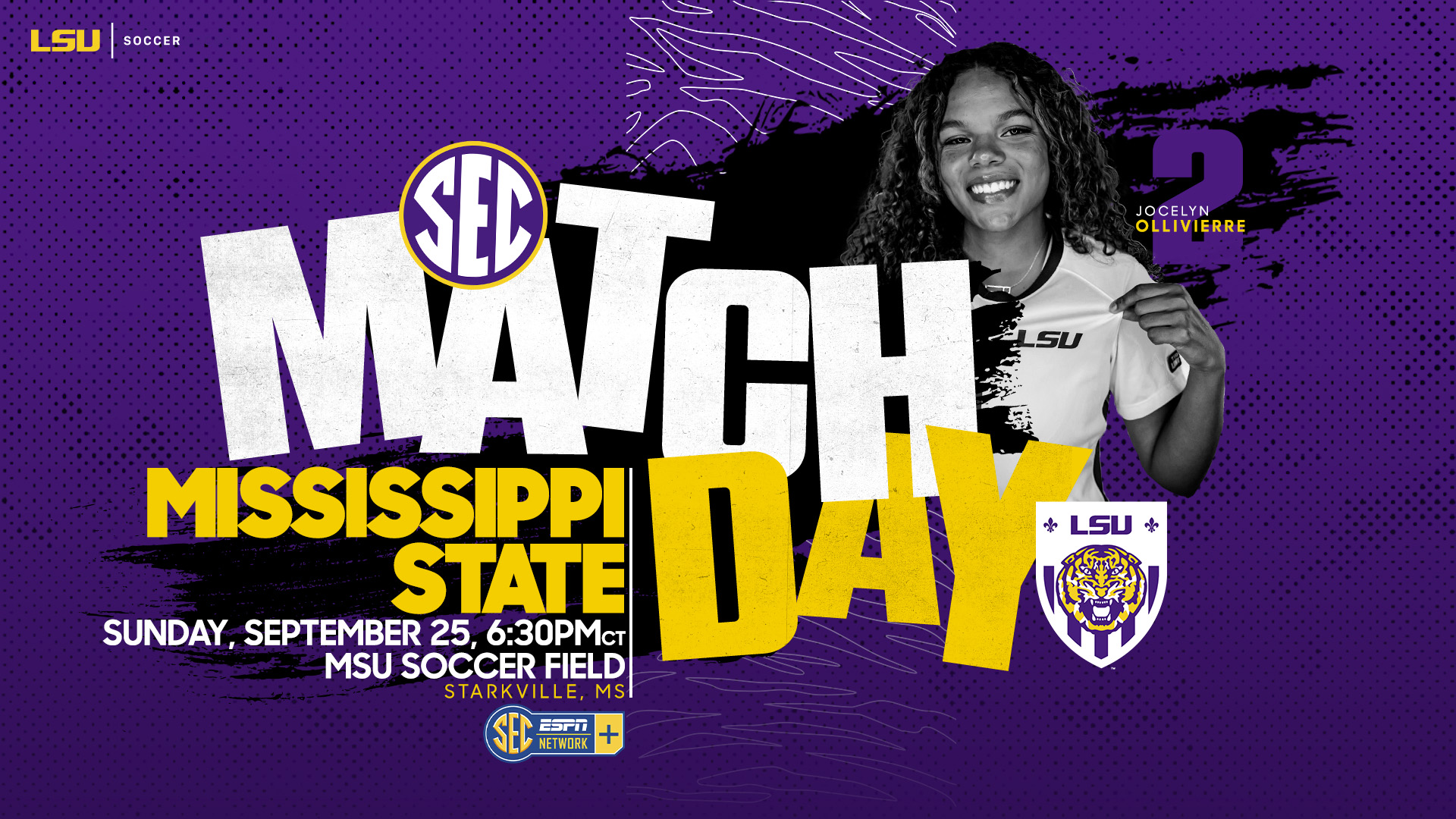 The match will be available on SEC Network Plus. Links to the livestream and live stats for the match can be found on lsusports.net.

The matchup between LSU and MSU will be the 28th time the two programs meet. LSU has a 21-3-3 record against the Bulldogs. The last time the two teams met was in 2021, where the Tigers defeated the Bulldogs 2-0 in Baton Rouge.

LSU took down Missouri 2-1 for a valiant comeback win to open conference play at home in Baton Rouge. The LSU Tigers record against Missouri moved to 7-2-1.

In a battle of the Tigers, it was Missouri who opened the match well and with attacking intent. Missouri’s Hannah Boughton had the first shot on frame just 46 seconds in but was calmly collected by LSU goalkeeper Bella Zanotelli. Zanotelli also made saves in the 17th and 25th minutes to keep the scoreline even at 0-0.

Missouri found the first goal of the match in the 35th minute. The visiting Tigers took a free kick and sent a cross into the box. The ball fell loose on the right side and was found by Jenna Bartels, who sent a pass into the middle of the box to find Dobbs. Dobbs slotted the ball home from eight yards out and gave Missouri a 1-0 lead on the night.

Zanotelli picked up one more save in the 42nd minute and that was all for the first half. Zanotelli finished the first half with four saves and the match went into the break 1-0 in favor of the visiting team

The second half was a back-and-forth affair with neither team able to grab control of the match. LSU had a big chance in the 64th minute as forward Alesia Garcia received a ball inside the box, cut outside to beat a defender and sent a shot that narrowly skid above the crossbar.

LSU never dropped their intensity and were rewarded as they found the equalizer in the 75th minute. Angelina Thoreson laid off a pass to Taylor Dobles, who hit a first-time cross into the box and found midfielder Raelyn Prince. Prince timed her run well and sent a strong shot on frame that deflected off a Missouri defender and into the back of the net. The goal tied the match at 1-1 and was Prince’s second goal of the season. Dobles had her first assist of the season while Thoreson collected her team-high fifth of the year.

The goal from Prince was an adrenaline shot for LSU as they continued to attack the goal to find a game-winner, which came just seconds later. Following the initial cross into the box on the corner, forward Mollie Baker took possession of the ball on the right side of the box. She cut inside on her left foot and lofted a cross to the back post and found Lindsi Jennings, who headed the ball past the goalkeeper and into the back of the net. The goal gave LSU a 2-1 lead and Jennings had her second goal in as many games. Baker’s vital assist was her second of the season.

Missouri was not able to find an answer and the match finished 2-1 in favor of the home team. In the shot battle, it was Missouri who won by a slim margin of 13 to LSU’s 12. The shots on goal contested were an even 5-5 between both teams. In possession, it was LSU who had more by a margin of 53% to Missouri’s 47%. It was a tale of two halves as LSU recovered from a slow start and finished strong to secure their second SEC win of the year.

Captain and center back Lindsi Jennings has scored two goals in the Tigers last two SEC matchups. The fifth-year senior is tied at the top as one of the leading goal scorers in conference play. Jennings also leads the conference in points with four.

Jennings first goal of the season came in Nashville when the Tigers opened up conference play with a 2-1 victory against Vanderbilt on Sunday, September 18.

LSU opened the game on the front foot and were rewarded with a goal just 13 minutes in. After a corner was sent in, the ball fell on the left side of the box to fellow centerback Shannon Cooke. Cooke took a touch and sent a cross to the back post that found Jennings, who headed home the ball into the back of the net.

Jennings second goal of the season came in the Tigers last matchup against Missouri on Thursday. Following an initial cross into the box on the corner, Baker took possession of the ball on the right side of the box. She cut inside on her left foot and lofted a cross to the back post and found Jennings, who headed the ball past the goalkeeper and into the back of the net.

The goal gave LSU a 2-1 lead and Jennings tallied her second goal in two straight games. Baker’s vital assist was her second of the season.

Jennings’ goal against Missouri secured the win for the home Tigers and moved LSU to 2-0 in conference play.

Freshman Ida Hermannsdottir now leads the team in goals scored with five. The forward recorded her fifth goal in the Tiger’s match on Sunday against the Commodores to put her in the lead. Fifth-year senior Alesia Garcia follows as one of the top leading scorers with four goals.

In the Tigers match against the Commodores, Hermannsdottir’s goal was crucial to secure the win and open SEC play with a win on the road. Her goal came off a free kick from 25 yards out after Midfielder Jordan Johnson was fouled outside of the box. Hermannsdottir launched a right-footed heater that went above the defenders wall, sped past Vanderbilt’s goalkeeper, and slotted into the bottom-left corner.

Angelina Thoreson leads the team in assists with five. The freshman continues to be a proven weapon on both sides of the ball and continues to create scoring opportunities for the Tigers.

Thoreson’s most recent assist came in Thursday’s match against Missouri, when she laid off a pass to Dobles, who hit a first-time cross into the box and found Prince, who took a volley touch that found the back of the net. The forward collected her team-high fifth assist of the year and continues to create opportunities for her teammates.