Ali Gaye is grateful for every moment he has experienced at LSU. 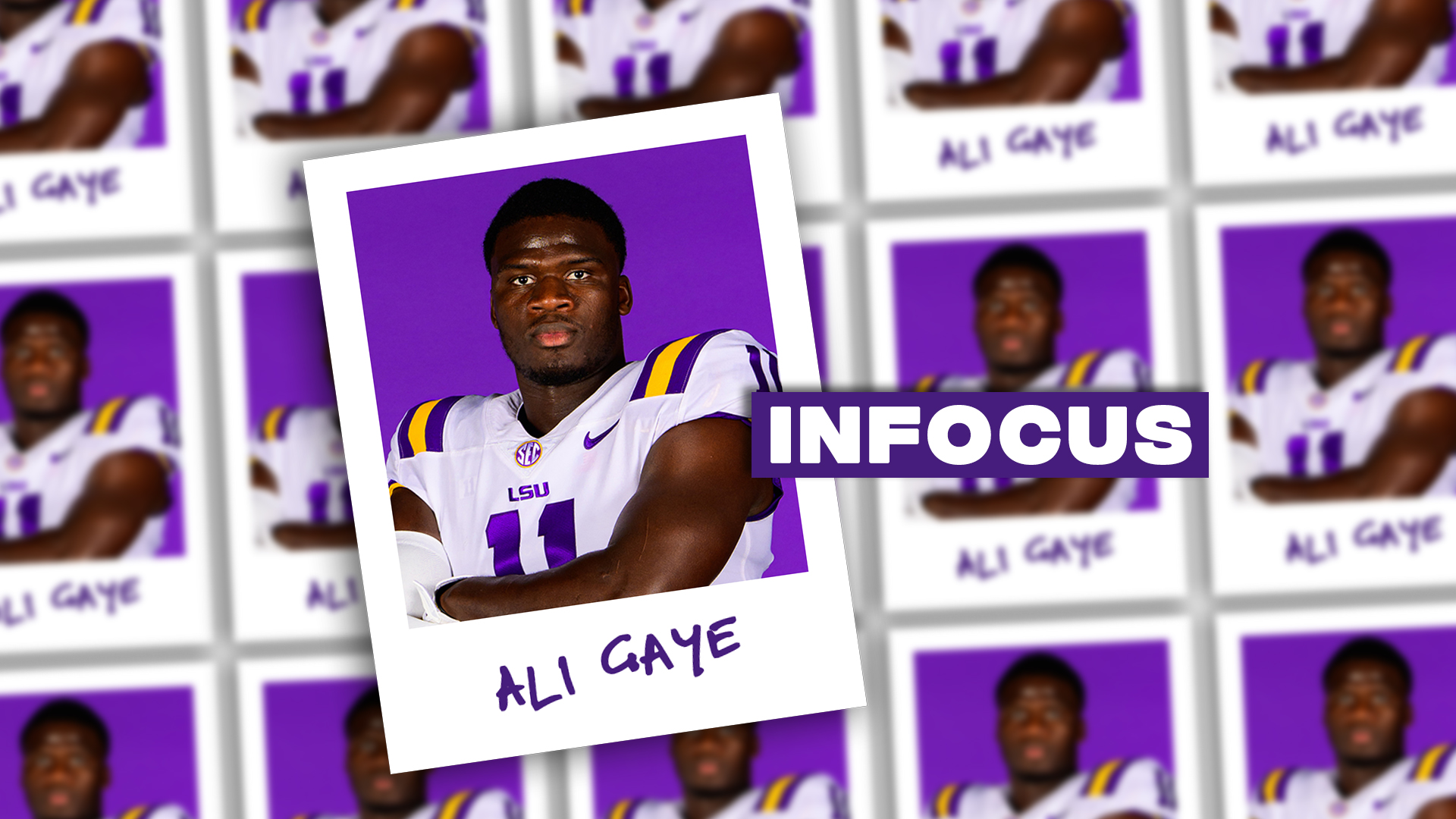 Ali Gaye has been a star ever since he stepped on the field at LSU. He was born in The Gambia, a small country located in West Africa. Growing up in The Gambia, he played soccer and attended school until his father, Omar, and his mother, Afsatou, moved their family to the Seattle area when Ali was 12 years old.

Moving to the United States was a big transition for Gaye. His native language is Wolof, so he had to learn English and how to interact socially with the different cultures in America.

“Being from a third world country, it’s different when you come out to a place like here,” Gaye said. “It taught me, don’t take anything for granted. Make the best of your opportunities. That’s why we came out here: for better opportunities. The opportunity to learn, to make something of myself.

“If you think about it, my parents spent their whole lives in one place. Coming to another place, that’s a big move. And I think they made a sacrifice for us, for me, my sisters, to find better opportunities to be successful in the classroom and to make something of ourselves.”

Gaye has always been an athlete. Growing up, he started playing soccer with the kids from his native country, and he carried his love for soccer over to the states. Once he arrived in America, he found another sport he loved, basketball. With his height and athleticism, he was a perfect fit for the sport.

When he first arrived in the U.S., Gaye also took an interest in American football. Gaye says football was the main sport everyone was talking about, so he wanted to get onto the field and try it. Unfortunately, as a seventh grader, he was not eligible to play for his school, so he had to wait until eighth grade to try out for the team.

Once Gaye reached the eighth grade, he finally got his chance to play American football. Gaye’s coach gave him pads and helmet and put him at right guard and defensive end. He played both sides of the ball in high school, and he instantly fell in love with the physicality of the game.

“I didn’t really know what I was doing, I just knew I wanted to hit somebody,” he said.

His freshman year of high school was the first time he got playing time for Edmonds-Woodway High School in Edmonds, Wash. As a freshman, Gaye played on the offensive line, and by his sophomore season, he was a varsity starter. Gaye says he was just having fun out on the field, not knowing where football would take him.

He started garnering national attention from colleges all over the country. One of Gaye’s high school teammates told him he needed to make a highlight tape to send to colleges. Once he made the tape and distributed it, offers started flying in. His senior season, Gaye received offers from Washington, Washington State, Idaho, California, Louisville and Ole Miss.

During his high school career, Gaye was scouted as the 26th-ranked defensive end prospect in the nation. He began his collegiate career at Arizona Western, a junior college located in Yuma, Ariz. There, Gaye appeared in eleven games, recording eight tackles, before transferring to Garden City Community College in Kansas for his sophomore campaign.

The decision to transfer paid off for Gaye, who received First Team All-Jayhawk League honors in 2019 at Garden City CC. That season, he registered 44.5 tackles, 7.5 tackles for loss and one sack. He was ranked nationally by 247 Sports as the No. 16 JUCO prospect.

After his sophomore season, Gaye visited Kansas State, Oklahoma and LSU before deciding to sign with the Tigers. He was an early enrollee, arriving on LSU’s campus for the Spring 2020 semester. He attended the CFP National Championship Game in January 2020, when LSU defeated Clemson in New Orleans, and he instantly fell in love with the team, coaching staff and fans of the Tigers.

Gaye began his LSU career in a crowded defensive line room with NFL prospects such as Neil Farrell Jr. and Tyler Shelvin. Being an early enrollee, Gaye got to work in the spring and was able to himself up on the depth chart. His hard work paid off when he earned a starting role at defensive end for the 2020 season opener.

His first game with the Tigers came against Mississippi State, and he enjoyed a phenomenal debut, recording 11 quarterback pressures, three tackles, two tackles for loss, one sack and three pass breakups.

Gaye said his favorite memory of that day was the team’s traditional pregame Tiger Walk down North Stadium Drive into Tiger Stadium.

“Experiencing the fans and walking with my teammates; it was something I always saw on TV, and finally being able to be there to experience it for myself was very emotional,” Gaye said. “I was feeling nothing but excitement and being ready to play my first game in Death Valley.”

When asked about his most memorable on-the-field moment at LSU, Gaye points to the 2020 game at Florida, known for the thrown cleat by a Gator player that put LSU in range for a game-winning field goal by Cade York. Gaye recalled the Tigers’ mentality going into the game as underdogs with multiple players affected by injury and COVID-19.

“We went there with the mentality that we’re underdogs, we’re coming to your house and we’re taking over. When you mess with somebody who has nothing to lose, you’re in trouble,” Gaye explained.

Though he was rated as an early-round NFL Draft selection, Gaye elected to return to LSU for the 2021 season.

“It was an easy decision to come back,” Gaye said, “because being surrounded by the guys on our team, I felt we had a chance to have a special season.”

Gaye enjoyed a tremendous start in 2021, totaling 19 tackles, 2.5 tackles for loss, and 2.5 sacks in four games before suffering a season-ending upper body injury against Kentucky on October 9.

Despite the setback to his health, Gaye thrived in the classroom and received his LSU degree at summer commencement in August, becoming the first member of his family to earn a degree from an American university.

He is back at full strength this fall, grateful for the opportunity to continue his career as a Tiger and eager to re-establish himself as a dominant force in the LSU defense.