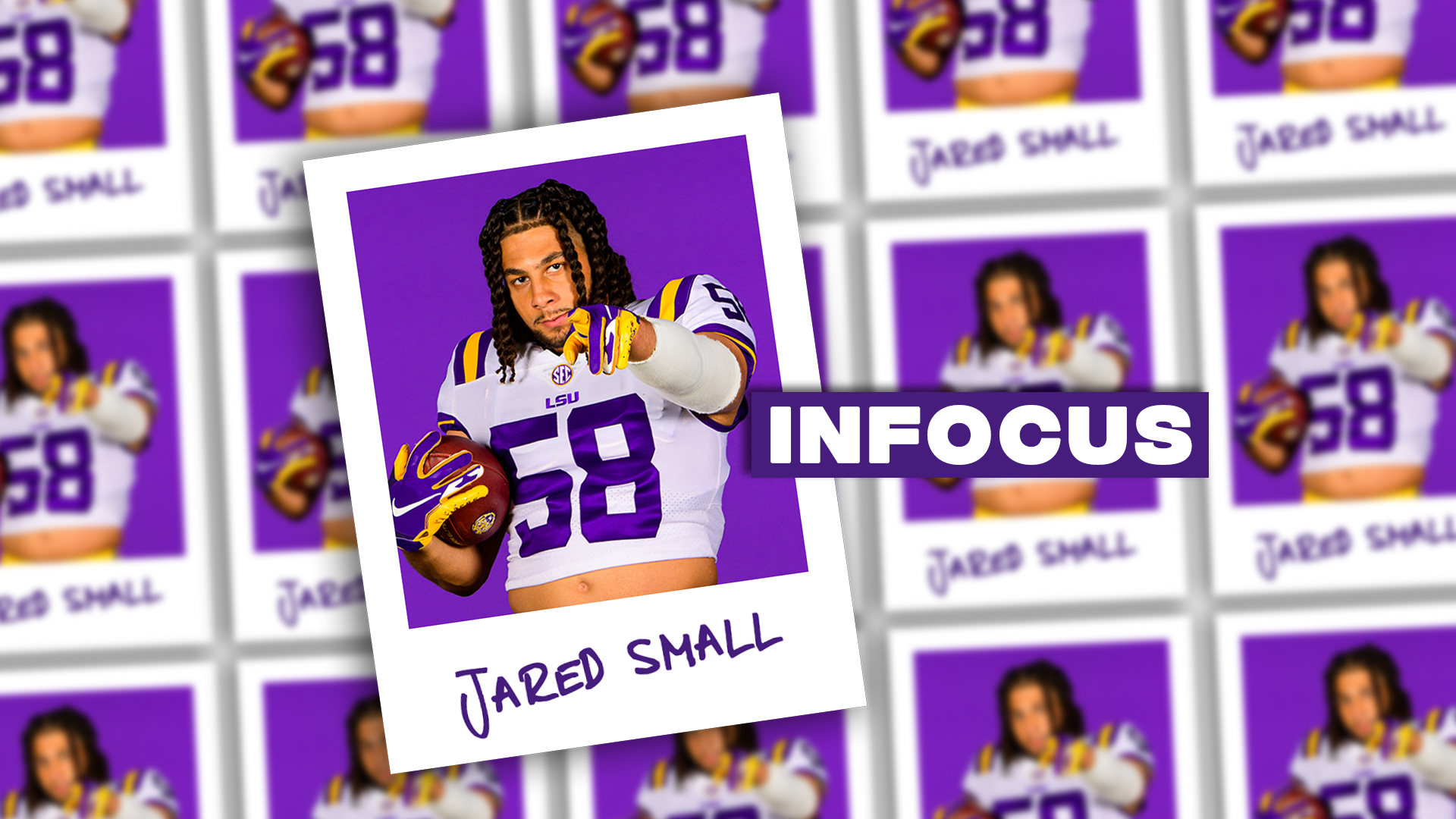 Jared Small is used to adversity.

He hasn’t always been the biggest or fastest player on the field. He is a former walk-on. And he certainly hasn’t had good luck when it comes to injuries.

If you know Jared, you know it will take more than that to stop him.

Small has spent his whole life in Baton Rouge. He has dreamed of playing for the Tigers since he was little. To say it means something for Jared to suit up in the purple and gold is an understatement.

“Being an LSU Tiger embodies every kid’s dream growing up in Baton Rouge,” Small says. “Being able to suit up in those colors and have those three letters across my chest, week in and week out, being able to put it on for your city and state, it means the world to me. It’s an opportunity that many are not given and being one of the chosen few is really special.”

After a successful prep career at Catholic High, which included all-Metro honors and a state championship his senior year, he made the decision to walk-on to the LSU football team.

He spent the early portion of his college career making appearances on special teams. And in the spring before his senior year, he got his chance to shine.Small made his way up the depth chart and started in the 2021 Spring Game, where he recorded 14 tackles and an interception. His coaches were raving about him. He was feeling great.

Everything was perfect. Until it wasn’t.

It was a week before the season was set to begin. August 31st, 2021. After having the best spring and fall camp of his career and impressing his coaches, he was set to play significant reps for the Tiger defense.

Then, the unthinkable happened.

Small tore his ACL in practice. A week before the season. The former walk-on was robbed not only of his senior year, but a chance to contribute.

Flash forward a year later. After extensive rehab, Small is back and ready to go.

“Typically, when you hear about an ACL injury, it’s devastating, but thanks to the doctors, staff, and great support system around me, it was just like another scratch on the leg” said Small, who made sure to show his appreciation to all the LSU team members who helped him get back to 100%.

Any other player might have used the injury as an excuse. But not Jared.

“I’ve taken away three things with me that I’ll carry with me through life,” Small says as he begins describing the lessons the injury taught him. “Number one, life is 100% mental. I found that as long as you can keep a healthy mental attitude, have faith, and stand by your own side through it all, there’s not much in life that can stop you.

“Number two, everything happens for a reason. I know a number of times in our lives you may ask yourself ‘Why Me?’ but you must know that in the end it’s all a part of God’s plan, and you just must have faith and control what you can control.

“Number three, don’t take a day, or anything that you care about in life, for granted. In a blink of an eye it can be all gone, so each day you wake up, that’s a blessing, each step, each breath, it’s precious, and I think we forget about the minute details in life because we get into our routine and roll with it, but sometimes, we have to reflect on where we are and what we have.”

If he sounds wise beyond his years, it’s because he is. Adversity creates experience. Experience creates wisdom. And Jared Small has experienced it all, both the highs and the lows.

Small is amped to play this season, but he is also looking forward to what the future holds.

“As far as my future, that’s in God’s hands,” he says. “The goal for everybody at this level is the next level. All I can do is go in that building every day with the right attitude, be a great person to everyone, and go to work.

“I feel that I’m more than capable to perform at the next level. All I can do is focus on perfecting my craft each day, trust the process, and keep doing what I do best and let God handle the rest.”