When people look at Davis Bove, often their first thought is, “How does he do all of that?” For them, it seems impossible. For him, nothing is. 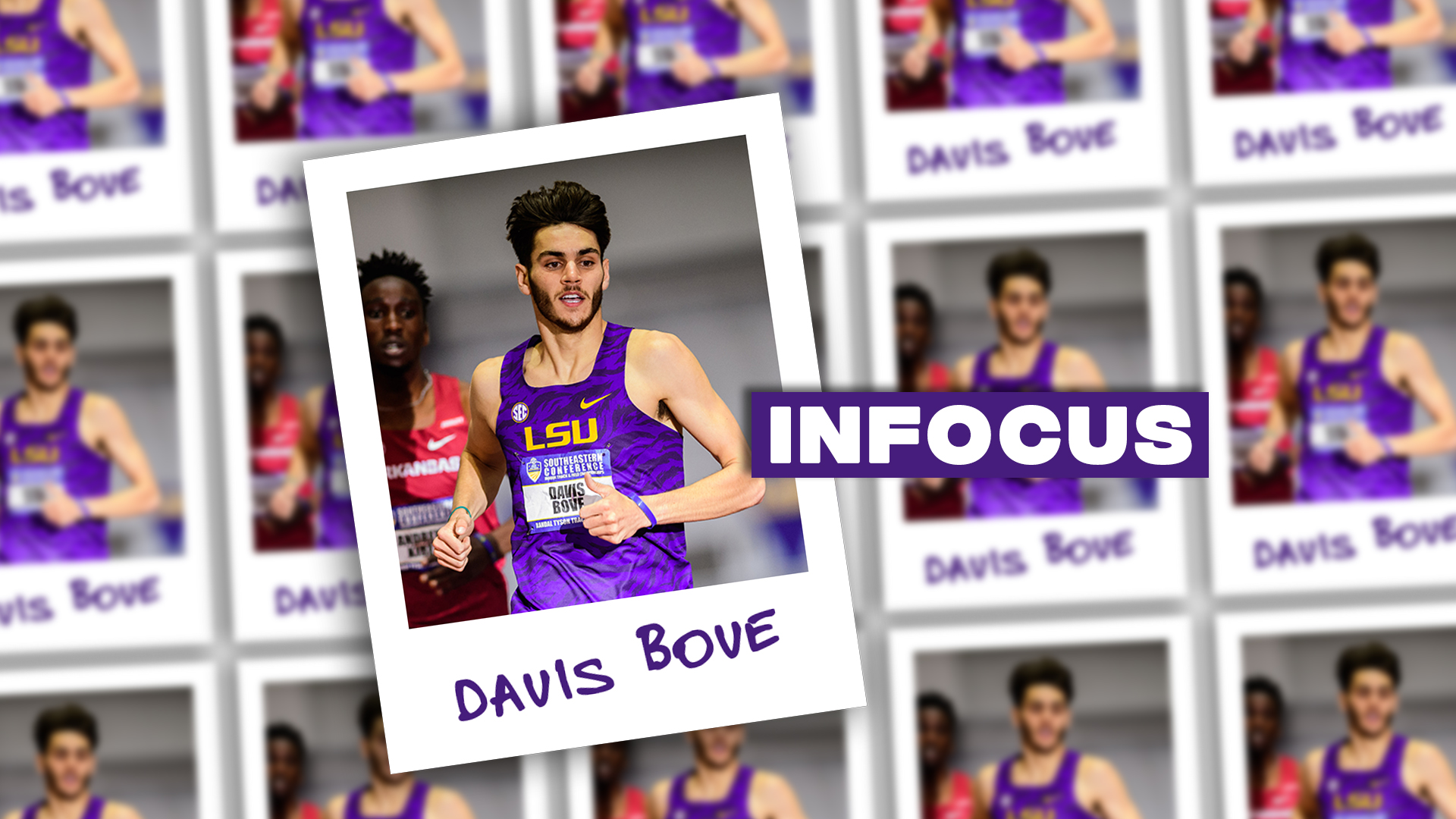 When people look at Davis Bove, often their first thought is, “How does he do all of that?”

For them, it seems impossible.

For him, nothing is.

The Franklin, Tenn., native has always been involved with endurance sports.  Bove ran with his parents when he was young, and eventually saw his dad race an Iron Man triathlon. That piqued his interest, which was developed further when his older sister, Brady, started doing triathlons herself. Bove completed his first triathlon as a kid, and never looked back.

“I just wanted to be like my dad,” Bove said. “As I got older, I obviously started taking it more seriously.”

Bove quickly rose on the elite circuit, as he was recruited by a professional triathlon team right out of high school. However, the desire to go to college and run track for a Division I team was just as strong.

“I never thought I had to pick one,” Bove said, regarding the decisions he faced as a high school senior. “The more I trained with biking and swimming, the faster I became with running. Some coaches weren’t okay with me doing both sports, and some were.”

The trio of biking, swimming and running is all Bove has ever known, and strictly running could have put him at a higher risk for injury. Additionally, it would have done him a disservice to take away his opportunity to achieve tremendous success in both track and triathlon.

Although he is grateful for the opportunity to compete in both sports at the highest levels, none of it has been perfect. The coronavirus prevented Bove from racing triathlons for over a year, and the ones he did race resulted in heartbreak.

In his first few races back to triathlon in the summer of 2021, Bove crashed on his bike and had mechanical issues that derailed his performance. As recently as two weeks ago, Bove competed in two World Cup races in Europe, where his bike seat broke after travel issues delayed his arrival by almost two days.

While Bove and Houston Franks, LSU head cross country coach and assistant track & field coach, design a detailed training plan to set up Bove for greatness on the track and in triathlon, he realizes that some things are out of his control.

“It’s not always going to be perfect,” Bove acknowledged. “You have to be flexible, somewhat, and Coach is really good about that. I can only do what I can do; sometimes it works really well and sometimes it doesn’t. But, that’s life, and if it’s important to you, you’ll get it done.”

During his sophomore year, when Bove had been out of triathlon racing for what seemed like forever, he achieved his lifetime goal on the track by breaking the four-minute barrier in the mile. The mark set an LSU school record of 3:57.49, which he broke again during the 2022 indoor season with a time of 3:56.38. Both of these record-setting times occurred at Vanderbilt University, just 20 miles from Bove’s hometown.

“I couldn’t believe it,” Bove recalled. “Doing it at Vanderbilt was special. My parents couldn’t come because of COVID, but getting to see them right after was awesome.”

The feat brought on an entirely new perspective for Bove. He admitted to feeling selfish at times, when people would congratulate him on successes or go out of their way to help him. However, a text from one of his former coaches changed that outlook.

“He started with congratulations and all of that, but then he said, ‘Thank you. You took us all under with you,’” Bove explained. “I realized that I’m not being selfish; I’m letting other people be a part of the success. So many coaches and middle-distance kids have that goal. It’s not something just I did; it’s all of my coaches, high school teammates, college teammates, everyone.”

In addition to qualifying for both the 2021 and 2022 NCAA Indoor Championships in the mile, Bove secured his first win as a professional triathlete this past summer at the Americas Triathlon Cup in Long Beach, Calif.

“I always knew I could do it, and I think that’s true for 99.9% of athletes,” Bove said of the triathlon victory. “I was happy for myself, and those who supported me through all the random issues that made everything so hard leading up to it. Little mistakes just put me out of reach, but finally something went well and I got to celebrate with my family and coaches.”

Even still, the internal battle against the “what ifs” cannot always be overcome by victories.

Shortly after Bove broke four minutes, some other elite NCAA milers were running close to 3:50. He wondered if he gave up triathlons, could he run that too? In the summer, he saw athletes who train full-time win big races. The same question applied:  if he fully committed to triathlon, would he get closer to his goals?

“You’ll always wonder what if,” Bove said. “There’s nothing stopping me from making a change. But, I’ve never wanted to do one more than the other enough to make a change.”

Bove combines his talent and work ethic with tremendous integrity, proven in the fact that he is the anchor of the distance group on LSU’s cross country and track team. His leadership approach is simple: encourage everybody, and do your job.

Regardless of the sometimes-overwhelming circumstances of being an elite dual-sport athlete, Bove relies on his security and confidence to push him forward. His goals are as big as his heart and his drive, striving for Olympic championships and records. On top of his physical ability, he has the mentality that every legendary athlete has:  he doesn’t think there is a point where he can’t do any better.

“I just love it,” Bove said. “Even when I’m not doing well, I still have fun. I love to win. I know I can do better and I want to see it happen.”