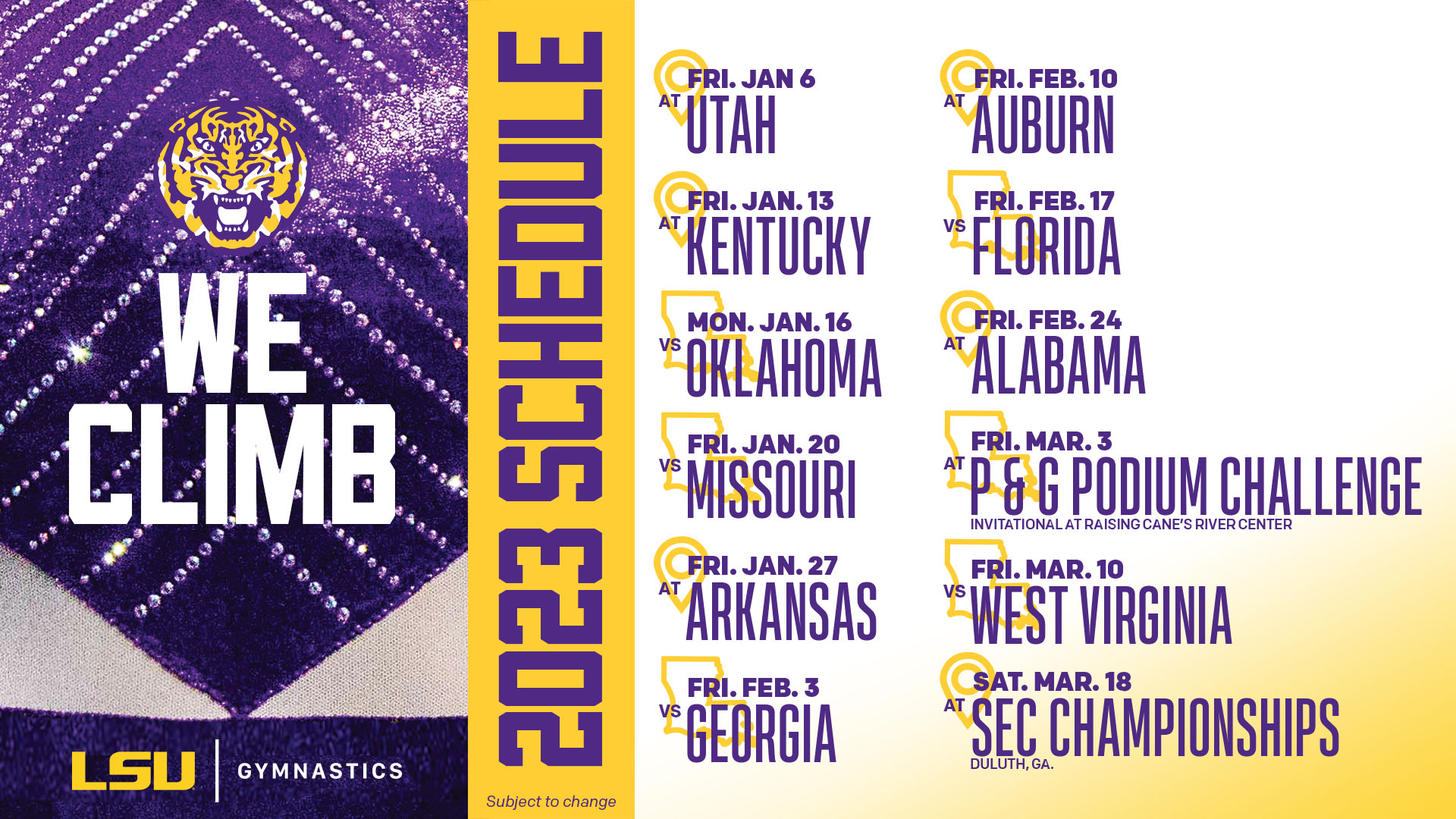 BATON ROUGE, La. – LSU gymnastics head coach Jay Clark announced on Monday a strong schedule for the 2023 season that will begin on the road on January 6 in Salt Lake City.

The schedule features five home meets and six away meets.

“This years schedule is exciting, tough, and full of great opportunities to demonstrate what we want this team to be,” said head coach Jay Clark. “The home schedule is one that should prove to be great for our fans. They give us such a tremendous advantage at home and we will count on them to do so again this year. We are all looking forward to getting back out there and starting our climb this year.”

The Tigers season begins on the road against Utah at the Jon M. Huntsman Center. The Utes finished third at the NCAA Championships in 2022.

The Tigers will remain on the road to open its Southeastern Conference schedule the following week against Kentucky in Lexington.

LSU will also travel to Arkansas, Auburn, and Alabama. The Tigers will welcome Oklahoma, Missouri, Georgia, Florida, and West Virginia to the Pete Maravich Assembly Center for the squads five home opponents.

The schedule also includes a quad meet at the Baton Rouge River Center against Cal, Washington, and George Washington.

The Tigers first home meet will be on January 16 as they host Oklahoma. The Sooners won the NCAA Gymnastics Championship title in 2022 and are ranked No. 1 in the early power rankings.

LSU was ranked No. 4 in the NCAA’s early power rankings as the Tigers have depth returning to the lineup.

Post season is set to begin on March 18 at the Gas South Arena in Duluth, Georgia, for the SEC Championship. NCAA Regionals will begin on March 30 and the NCAA championships will follow on April 15 in Fort Worth, Texas. Specific competition days and meet times will be announced at a later date.

Meet times and broadcasts will be announced at a later time.

Information on renewals and purchases for season tickets can be found on lsutix.net.

"Greater Because of Her" - Celebrating 50 Years of LSU Women's Athletics. This week we recognize the terrific and tenacious D-D Breaux.
Skip To Main Content