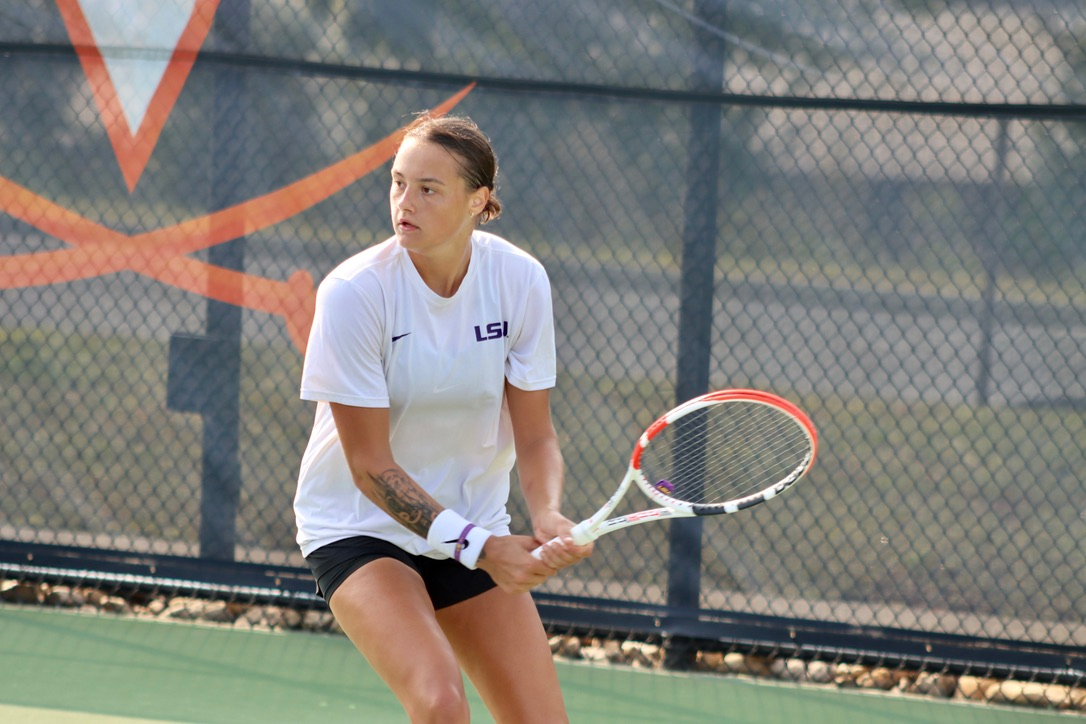 CHARLOTTESVILLE, Va. – The LSU women’s tennis team had two players grab singles wins to conclude the final day of the Wahoowa Invitational on Sunday afternoon at the Virginia Tennis Complex.

Doubles Results
LSU drew host team Virginia in both doubles and singles play. Senior Safiya Carrington and sophomore Anastasiya Komar were the first duo in action as they took on Sara Ziodato and Julia Adams. The Cavalier duo narrowly edged the Tiger pair by a margin of 6-4 to get the win.

Seniors Maggie Cubitt and Nina Geissler faced No. 26-ranked Natasha Subhash and Elaine Chervinsky at the next court. The two teams split the first ten games and sat at 5-5. Subhash and Chervinsky were able to string together back-to-back wins en route to a 7-5 win.

Graduate student Mia Rabinowitz and freshman Noor Carrington teamed together to take on Hibah Shaikh and Annabelle Xu. The match was a back-and-forth contest with nothing to separate the two teams after 12 games, tied at 6-6. The tiebreaker saw the Cavalier duo take an early lead and not look back on the way to a 7-2 win and securing victory.

The final doubles match of the day saw sophomore Shaye Longwell and freshman Nikita Vishwase team together to take on Meggie Navarro and Melodie Collard. Navarro and Collard came out on top over the LSU pair by a score of 6-3.

Singles Results
In a ranked battle. No. 94 Safiya Carrington faced No. 18 Subhash. Subhash edged Carrington in a tight 6-4 first set before Carrington battle back with a 6-4 win of her own in the second to force a ten-point tiebreaker. The decisive tiebreaker was a tight contest, but Subhash was able to just narrowly edge Carrington by a score of 10-6 to claim a close win.

Komar picked up her second singles win of the week as she downed Ziodato in three sets. The first set was a strong display from the Cavalier player, who won 6-1. Komar struck back in the second set and narrowly claimed a 6-4 win. Down to the ten-point tiebreaker, the two players swapped points back and forth until the LSU freshman was able to grab two straight points and win 11-9.

At the next court, Geissler took on Xu. The two players played two even sets, but it was the Virginia player who edged the extended first set by a margin of 7-5 before narrowly winning the second, 6-4.

Rabinowitz faced ranked competition in the form of No. 56 Chervinsky at her court. Chervinsky claimed the first set 6-3 before outlasting a surging Rabinowitz in the second set as she won 7-5 to secure the win.

At the adjacent court was Vishwase, who took on doubles-foe Collard. Collard was victorious by a margin of 6-2, 6-1.

Noor Carrington ended the weekend by claiming the first singles win of her collegiate career as she grabbed a win over Nicole Kiefer. The first set saw Carrington hold off Kiefer by a margin of 6-4. The second set was another even set with Carrington clutching up and stopping a charge from Kiefer to win 7-5 and make her first collegiate win a straight set one.

The final match of the weekend saw Longwell take on doubles opponent Navarro. Navarro edged Longwell in set one, 7-5, and rode momentum into the second set as she won 6-0 to clinch the straight set win.

Up Next
Two Tigers will represent the LSU women’s tennis team at the 2022 ITA All-American Championships. Carrington and Kylie Collins will head to Cary, North Carolina to compete against the best collegiate players in the nation starting October 1.