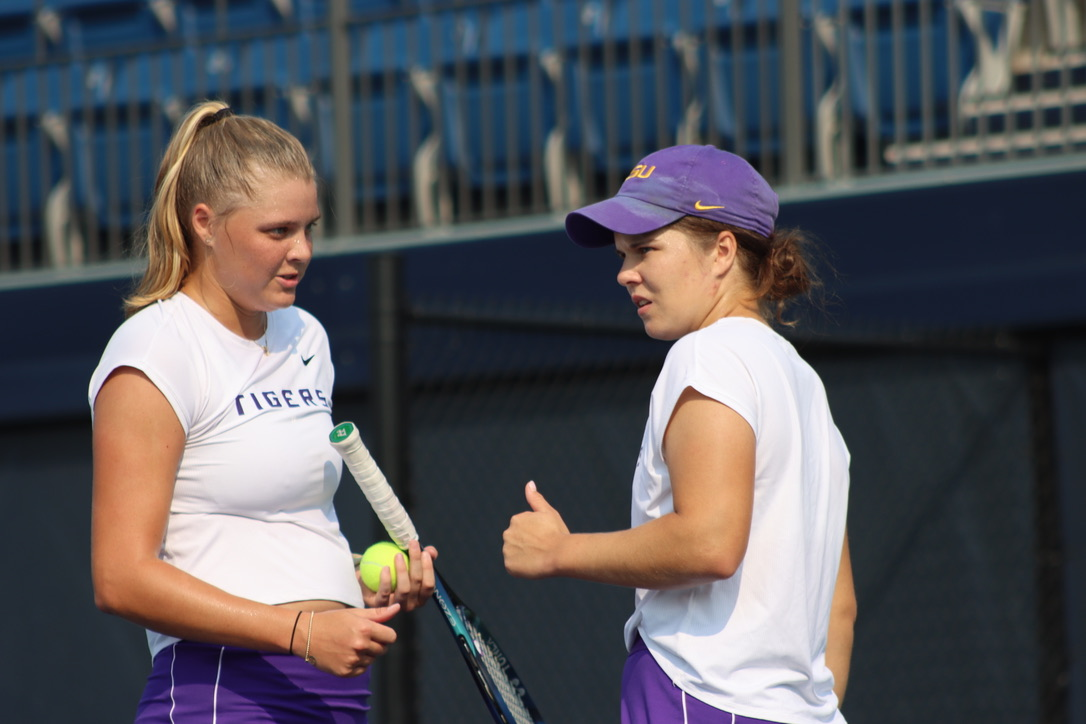 CHARLOTTESVILLE, Va. – The LSU women’s tennis team wrapped up play for day two of the Wahoowa Invitational on Saturday afternoon at the Virginia Tennis Complex.

Doubles Results
The Tigers matched with a mix of players from Old Dominion and NC State for doubles play. Senior Safiya Carrington and Anastasiya Komar faced Old Dominion’s Sofia Johnson and Tatsiana Sasnouskaya in the first match of the day. The Old Dominion duo were able to come out on top in a 6-3 contest.

Seniors Maggie Cubitt and Nina Geissler took on NC State’s Gina Dittmann and Sophie Abrams. The two duos played a tight contest that was split at 5-5 after ten games. The experienced LSU pair were able to string together two consecutive wins in doubles to claim a 7-5 win and give LSU its first doubles win of the day.

At the next court, the freshman pair of Noor Carrington and Nikita Vishwase faced Old Dominion’s Shahar Biran and Alesya Yakubovich. LSU’s duo played a tight contest with the opposing team but were narrowly edged out by a score of 6-4.

The final doubles match of the day saw graduate student Mia Rabinowitz and sophomore Shaye Longwell tag together to take on Allison Isaacs and Alexandra Viktorovitch of Old Dominion. The Monarchs’ doubles duo claimed a 6-1 win.

Singles Results
LSU drew six Old Dominion players and one Auburn player in singles play. Komar led off for the Tigers as she faced doubles opponent Sasnouskaya in singles action. The Monarch player opened with a 6-2 win in the first set and repeated the scoreline in the second to secure the win.

Next was S. Carrington as she took on Viktorovitch. Viktorovitch won the first set by a margin of 6-3 before holding off a surge from Carrington in the second set to narrow grab a 6-4 win and secure the win.

Geissler was in action at the next court as she faced Johnson. The Old Dominion sophomore struck first with a 6-2 win in the first set and repeated the scoreline in the second to clinch victory.

The fourth match featured Rabinowitz face Yakubovich. It was a straight set win for Yakubovich as she won by a score of 6-2, 6-2.

Vishwase took on doubles foe Biran at the adjacent court. Biran won the first set by a score of 6-3 and managed to come out on top in a tight second set, 6-4, to secure the win.

The final LSU-Old Dominion singles matchup had N. Carrington face Isaacs. Isaacs won the first set 6-2 and went on to win the second by a margin of 6-3.

The final singles match of the day for LSU saw Longwell face Auburn’s Anastasia Astakhova. The Auburn player came out on top in a battle of the Tigers as Astakhova defeated Longwell by a score of 6-1, 6-1.

Up Next
The final day of the Wahoowa Invitational kicks off on Sunday morning. LSU will take part in the 11 a.m. CT group alongside host school Virginia.