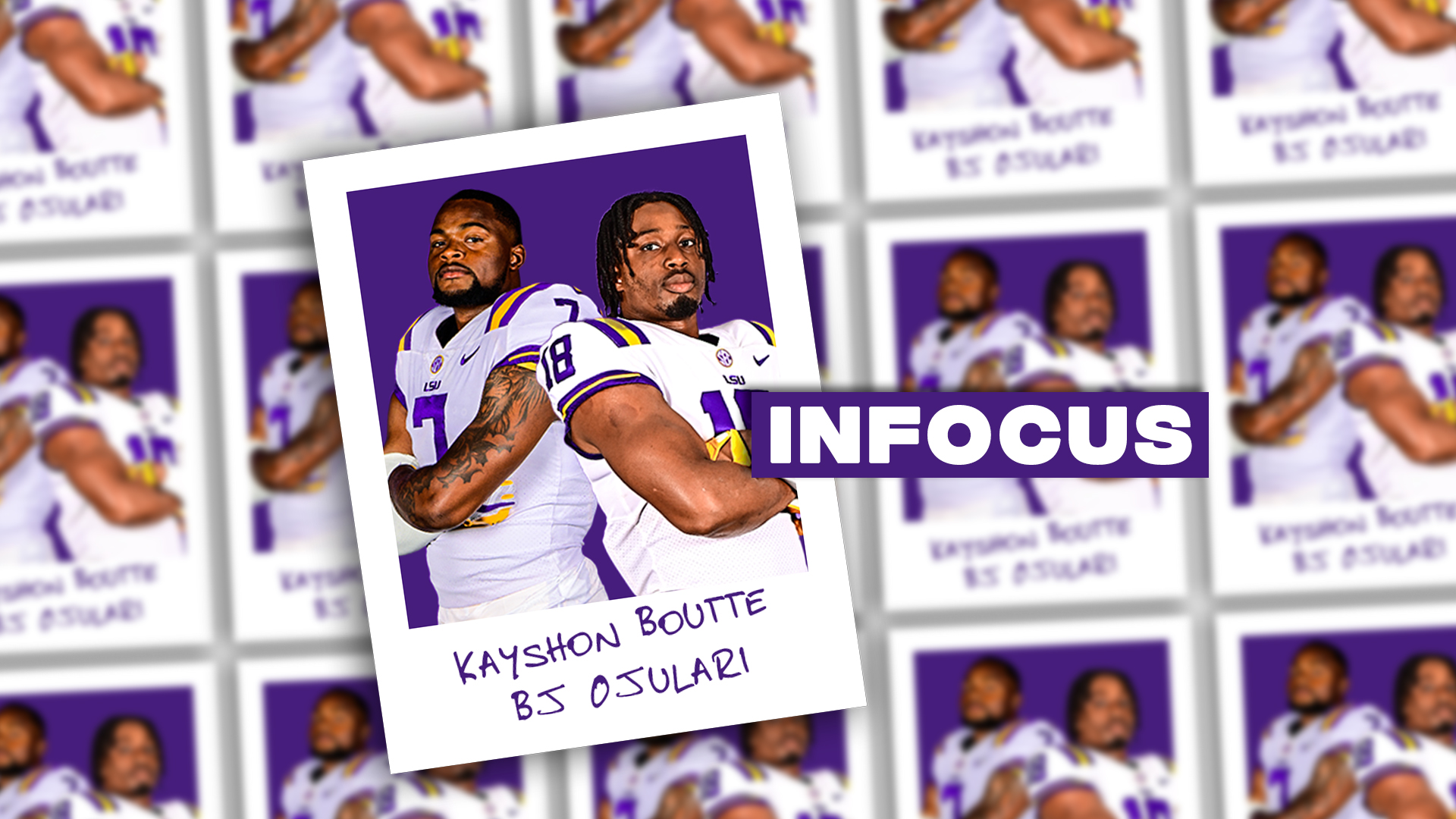 Ojulari, a native of Marietta, Ga., is a 2002 preseason All-America candidate who has represented the LSU football program at a NCAA Leadership Symposium as well as participating in numerous community service events.

LSU’s tradition of No. 18 began in 2003 when quarterback Matt Mauck guided the Tigers to their first national championship since 1958.

“The No. 18 is the player who brings all those traits of someone who leads in an extraordinary manner,” LSU coach Brian Kelly said. “The attention to detail, great focus, represents the program in a positive way in the classroom, in the community and on the field.

“His teammates, coaches and the entire staff believe BJ Ojulari embodies what the number 18 represents. He carries our traits of excellence every day on and off the field.”

Boutte continues a relatively new tradition at LSU by wearing the No. 7 jersey. He is one of the most dynamic receivers in the country and a mismatch for any defense.

No. 7 has become associated with a player who is an electrifying playmaker while also displaying all of the qualities necessary to promote the building of a championship teams. Some past wearers of the No. 7 jersey for LSU include cornerback Patrick Peterson, defensive back Tyrann Mathieu, running back Leonard Fournette, wide receiver DJ Chark and cornerback Derek Stingley Jr.

Set apart from the set apart.

LSU No. 18s:  men of integrity, leadership, selflessness, resilience and excellence in every facet.

BJ Ojulari is all of those things. But, how is he different from the 17 players that wore it before him?

Let him show you.

Since he and his other brother were kids, Ojulari’s parents raised the boys to value who they are above what they do. That philosophy raised two men that are stars on the field, and shine just as bright off of it. While some elite athletes struggle to balance both talent and character, the Ojulari brothers never blinked at the challenge.

“I credit a lot of it to my parents,” Ojulari said. “It’s been in us our whole lives – treating people right, having good character. We were always taught to put our education before football as well. I definitely took school seriously, and I definitely want to graduate.”

In addition to Ojulari’s parents, his brother, Azeez, serves as a mentor to him. Azeez went through the college football process at the University of Georgia, and is now a linebacker for the New York Giants in the NFL. Azeez ensures his character and the way he carries himself is just as elite as his performance, and the younger Ojulari follows suit.

“We act the same, and we have the same type of character,” Ojulari said of his brother. “If he was here, I believe he would have worn No. 18 as well. He’s made it to where I’m trying to go, so he’s a great guidance for me. My play kind of resembles him a little bit, but just the competitive nature in me, I like to say that I play a little better than him.”

To a kid that wants to play in the NFL, sometimes all that matters is football. To Ojulari, the seemingly “little” off-field things are what greatly contribute to his on-field success. For Jack Marucci, LSU director of performance innovation, he knew that from the first day Ojulari stepped on campus, it was only a matter of time before he became the next No. 18.

For Ojulari, however, he always saw Ali Gaye, his co-captain and the other defensive anchor, as the team’s No. 18. Ojulari observed the guys who wore it years before, especially Damone Clark, and thought Gaye was the epitome of what the number represents. However, Ojulari’s teammates, coaches and football staff saw it in him, too.

“It wasn’t always my goal to wear No. 18,” Ojulari stated. “It was really just to treat everyone the way I want to be treated, so I think that played a big factor in it. Staff being able to pinpoint me as No. 18 was very special to me.”

Arriving on campus after LSU’s perfect season in 2019, Ojulari and the entire football program faced adversity head on. With struggles in competition and lack of continuity with coaches, the environment was nothing like the pure bliss from just months prior. Despite the noise and uncertainty, Ojulari never wavered from his strength and security. He continues to be the anchor of the team, regardless of who is in charge.

Ojulari’s family built his foundation, but his teammates and coaches continue to shape him as he grows into the man he is destined to become. He is one that thrives off of being coached hard, and it is the reason he remains so determined and resilient.

“One thing they instilled in us throughout every coaching staff, especially in the beginning, was, ‘Keep fighting. Never stop fighting,’” Ojulari explained. “The older guys before me – Austin Deculus, Ed Ingram, Andre Anthony, Damone Clark – they never stopped fighting. That’s one thing I still carry to this day, and carry to the team now. No matter the circumstances, no matter who’s here, we’re still LSU. Anybody can be the head, but the standard of LSU is still going to be the same no matter who’s leading us.”

Fighting is something every player, coach and spectator can expect Ojulari to do. While all LSU No. 18s are similar at the core, Ojulari proves he is exceptional.

“For me, I just want to play so hard and play so dominant that when anybody thinks of No. 18, they think about my name,” Ojulari said. “I know if I play my hardest, play for my team and leave my legacy, that’s going to be no problem.”

His grace as a football player, and as a human, make being one of the top players in the country look easy. Except, nothing he wants is easy, and Ojulari would not have it any other way. As he pursues his own dreams, he continues to honor and encourage those that have pushed him there. That makes him the perfect definition of an LSU No. 18.

He may even be redefining it.

“Sometimes, it’s hard, doing everything right,” Ojulari said. “Sometimes you want to be rebellious; you want to do stuff with your friends. But, you have to think about the bigger picture – who you are and who you represent. It’s not just you; you represent the team, the school, your family, so I keep that in the back of my head every time. I know who I’m playing for, who I’m fighting for, and I just can’t disappoint everybody who’s rooting for me.”

Kayshon Boutte is coming off of a 2021 season where he was on pace to finish among the SEC and national leaders in receiving TDs. Up to the point of his ankle injury six games into last season, he had already caught at least one TD pass in every game, including three in the opener at UCLA.

Remarkably, he finished the 2021 season as the Tigers’ leader in receiving yards (509) and touchdowns (nine) despite missing the final seven games of the year.

“I’m excited to get back on the field with my brothers and work all season,” Boutte, a product of New Iberia, La., said after he was awarded the prestigious jersey number. “To do it in the No. 7 and follow in the footsteps of some of the greatest players in LSU history, is an honor.”

First-year LSU coach Brian Kelly knows how potent Boutte can be in the Tigers’ offense.

“I think what we learned in the first game this season is that Kayshon is going to face a lot of off coverage and double zone from opposing defenses. We need just to get the ball out to him quickly and let him make some plays, and it opens up our offense in other areas.

“If they’re going to play double zone and play soft against him, let’s get the ball into his hands. He’s tough to bring down as it is, so even if they’re short, quick routes, he’s going to make some things happen.”

Kelly believes Boutte has shaken off the effects of last season’s ankle injury.

“I think he’s rounded himself into playing shape,” Kelly said. “Obviously the injury put him in a situation where we had to be careful with him during summer training. He committed himself into our training room, and I think he’s in a position now where he can have a great season.

“He’s got explosiveness. He can catch the long ball, break tackles. He’s an all-around receiver from all those facets.”

The junior wideout owns five 100-yard receiving games, including an SEC-record 308 yards and three TDs on 14 receptions in the 2020 season finale against Ole Miss.

In his freshman season, Boutte led the Tigers in receiving yards and finished second in receptions with 735 and 45, respectively. Over the final three games of that 2020 season, the product of Westgate High School in New Iberia combined to catch 27 passes for 527 yards and four touchdowns.

Great players exude confidence, and Boutte believes he is the best receiver in college football. The Fred Biletnikoff Award is presented each season to the nation’s No. 1 wideout.

“If I didn’t have my injury last season, I was on pace to win the Biletnikoff,” Boutte said. “Winning it is definitely one of my goals.”

Certainly, the LSU offense operates at a higher level when Kayshon Boutte is on the field.

“It’s a great feeling to be back, but it was a long 10 months watching from the sidelines,” Boutte said about his road to recovery from injury. “It’s hard, because you’re in a different place mentally. There’s a lot going on, you’re trying to work to be back, you go out and practice with an attitude and be aggressive. It’s exciting.

“As a player, I felt it was important for me to be at LSU and overcome this obstacle. I feel like we’re in a good environment here under a great head coach.”