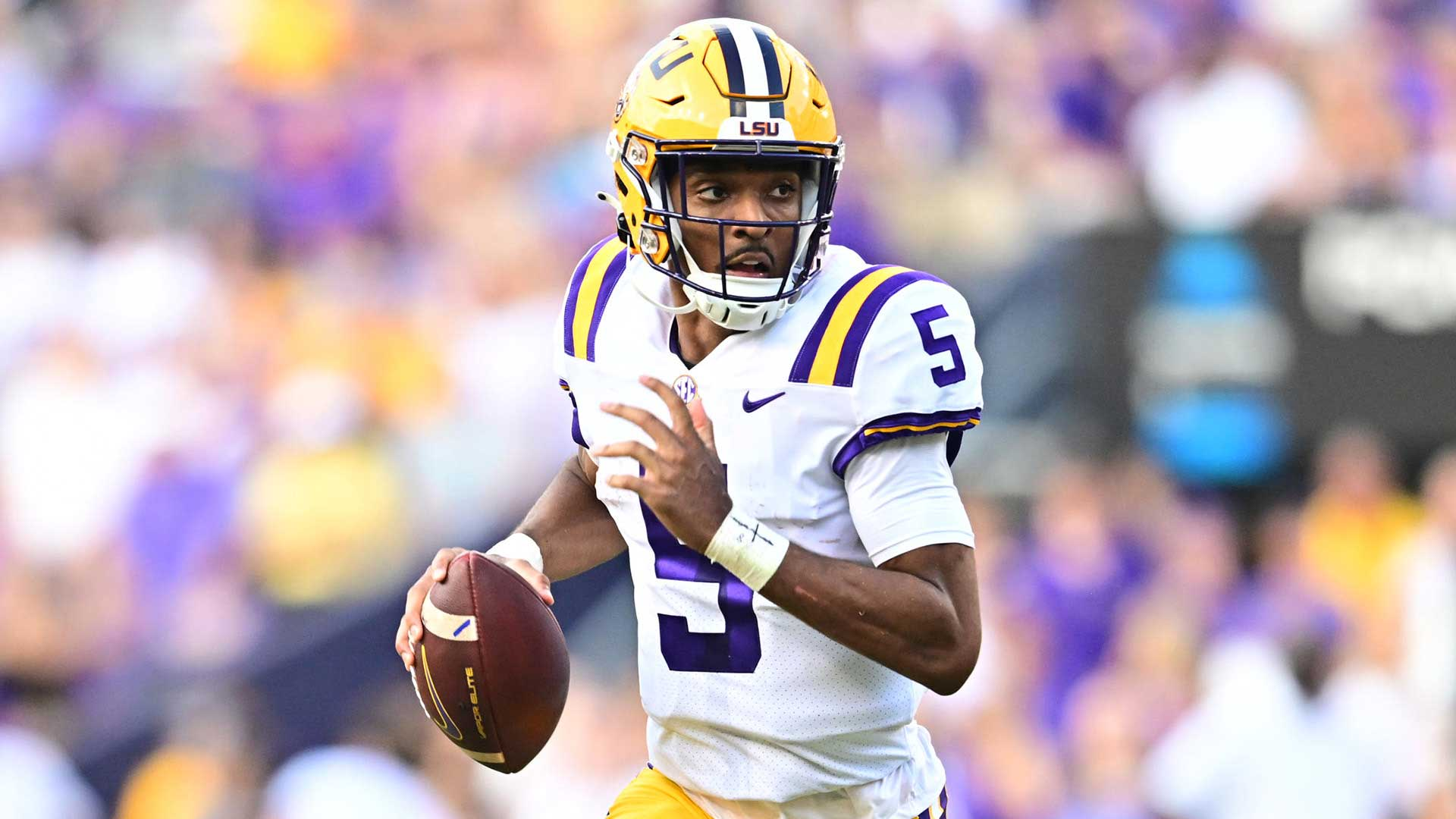 BATON ROUGE – Jayden Daniels and the LSU offense scored 21 unanswered points in the fourth quarter to give the Tigers a victory in the SEC opener over Mississippi State, 31-16, on Saturday night in Tiger Stadium.

LSU improved to 2-1 with the victory, while the Bulldogs dropped to 2-1 on the year. The Tigers return to Death Valley next Saturday to face New Mexico at 6:30 p.m. CT.

Sophomore wide receiver Malik Nabers caught a team-high six passes for 76 yards as the Tigers posted 416 yards of total offense, while the LSU defense limited the Bulldogs to 289 yards from scrimmage.

Jaray Jenkins caught the Tigers’ only touchdown pass in the second quarter.

Senior safety Jay Ward had a career day with 11 tackles, 1.5 for loss, one pass break-up and an interception. Sophomore defensive end BJ Ojulari was all over the field with four tackles, 2.5 for loss, 1.5 sacks and two quarterback hurries.

Armoni Goodwin rushed for 75 yards and a touchdown on nine carries, but Daniels led LSU’s rushing attack with 93 yards on the ground with two scores.

After winning the coin toss, LSU elected to receive and take the ball. The first explosive play of the game came via an 18-yard completion from Daniels to Kayshon Boutte, but the Tigers were forced to punt from their own 49-yard line on the opening drive of the contest.

On 4th-and-1 from their own 22, Mississippi State rolled the dice and went for it, securing a first down on a 4-yard rush. That would quickly pay off as quarterback Will Rogers found Rara Thomas for a 20-yard completion, then on the next play, Jo’quavious Marks busted open a 37-yard touchdown run to give the Bulldogs a 6-0 advantage. The extra point was no good.

On their next offensive possession, Mississippi State decided to go for it again on 4th-and-1 from LSU’s 41-yard line, but sophomore safety Major Burns stopped the Bulldogs for a loss and a turnover on downs.

State took another chance and went for it on fourth down on their own 29, but Mike Jones Jr. and Mekhi Wingo brought down MSU for no gain and a turnover on downs from the MSU 29-yard line. However, Daniels fumbled on the next possession to give the Bulldogs the ball back.

On 3rd-and-10, sophomore defensive end Sai’vion Jones sacked Rogers and forced a fumble, which was recovered by MSU.

Sophomore linebacker Harold Perkins Jr. gave the Tigers their third sack of the game, while Ojulari recorded a tackle for loss on the next play to turn in another defensive stop. LSU tallied six tackles for loss as a defense at that point.

Rogers found Thomas on a fade for a 13-yard touchdown completion, extending Mississippi State’s lead to 13-0 with 2:14 left in the half, capping a three play, 54-second drive spanning 48 yards.

The Tigers finally got the scoring drive they needed with 46 seconds left in the half as Daniels found Jaray Jenkins for an 8-yard score through the air, cashing in a seven play, 75-yard drive. Daniels utilized his legs to get LSU in scoring position, scrambling to pick up chunk plays of 13, 15 and 20 yards.

LSU forced a three-and-out to open the second half. On the next offensive possession, Daniels led the offense down to the 18-yard line, but an incomplete pass intended for Nabers on third down forced the Tigers to kick a field goal. Damian Ramos’ 35-yard attempt was good, cutting Mississippi State’s lead in half to 13-10 after a 69-yard drive on nine plays.

On 4th-and-4 at midfield, Daniels’ pass to Nabers fell incomplete to turn the ball over on downs, but on the next possession, MSU went for it on 4th-and-2 and did not convert to give LSU the ball back.

Jay Bramblett’s punt to Austin Williams was muffed and recovered by long snapper Slade Roy at the Bulldog 9-yard line.

The Tigers took advantage of the turnover as Daniels scored a 3-yard touchdown on a quarterback keep.

Goodwin put the game on ice, taking a 47-yard rush to the house to give the Tigers a two-possession cushion at 31-16 with 4:50 remaining in the contest.

Ward picked off Rogers and returned it for 19 yards with 3:02 to play.