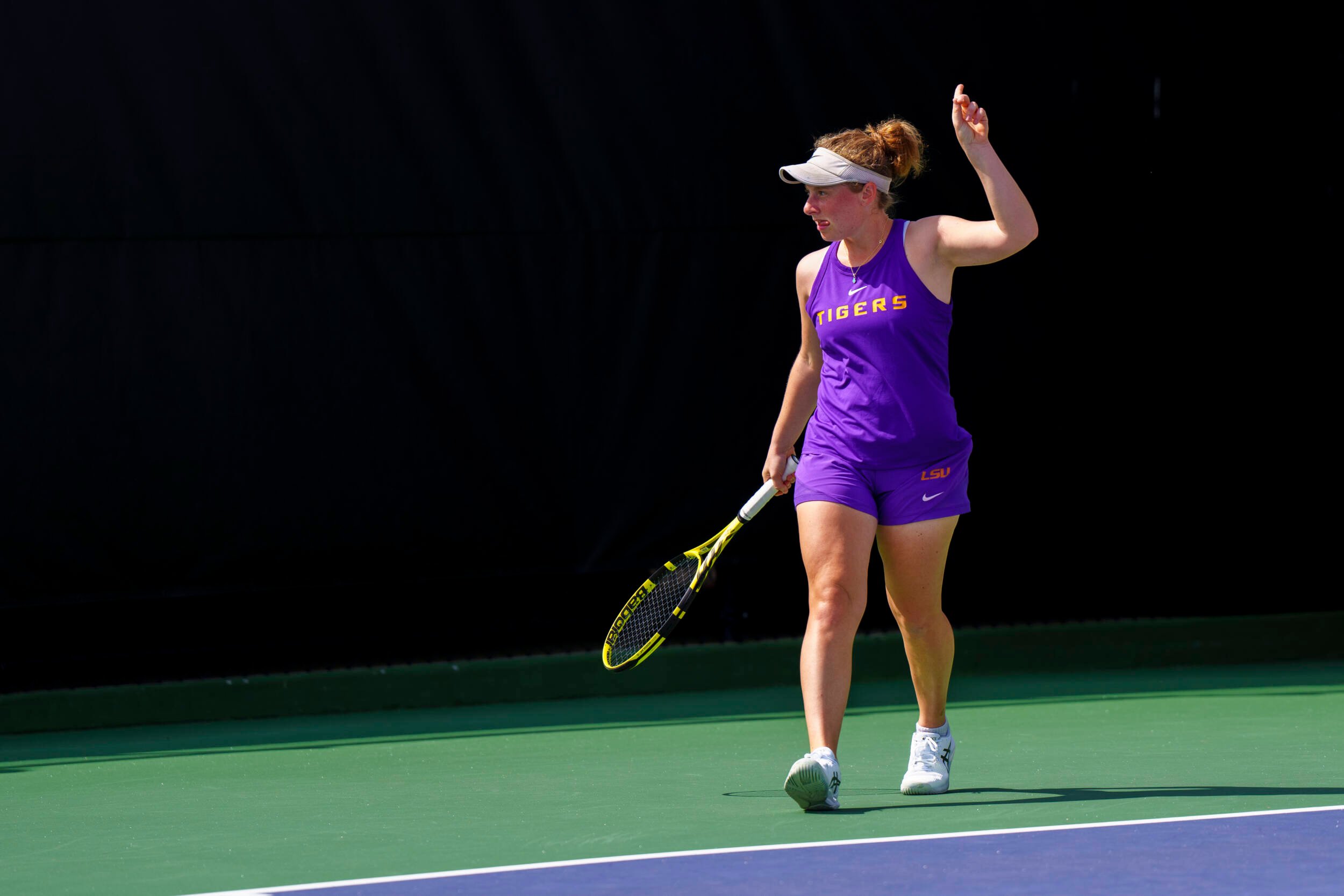 CHARLOTTESVILLE, Va. – The LSU women’s tennis team grabbed three singles wins and one doubles win on day one of the Wahoowa Invitational at the Virginia Tennis Complex on Friday.

Doubles Results
Four Tiger duos were in action in the doubles round. Safiya Carrington and Anastasiya Komar took on NC State’s Nell Miller and Amelia Rajecki. The Tiger duo, teaming for the first time in a competitive match, brushed aside the Wolfpack duo and secured a strong 6-2 win. Miller, a fifth-year senior from England, was one-half of the 2022 NCAA Doubles National Champions and had recently participated as a wild card in the doubles bracket at Wimbledon over the summer.

Seniors Maggie Cubitt and Nina Geissler were paired up against Kate Duong and Megan Heuser of Illinois. The Fighting Illini duo came out on top by a margin of 6-1.

Next in action was graduate student Mia Rabinowitz and freshman Nikita Vishwase as they faced NC State’s Sophie Abrams and Gina Dittmann. The Wolfpack duo dropped only one game as they went on to secure a 6-1 win.

The final doubles match of the day for LSU came when sophomore Shaye Longwell and freshman Noor Carrington took on the pair of Josie Frazier and Ashley Yeah of Illinois. The Illinois duo came out the gates quick and went on to grab a 6-0 win.

Singles Results
The first singles match of the day saw S. Carrington take on doubles foe Rajecki. Rajecki flipped the script from doubles play and was victorious over Carrington, grabbing the first set by a close 6-4 margin before winning the second by a score of 6-3.

Komar faced NC State’s Dittman in singles play. Komar played two strong sets of tennis, only dropping one game in the first set to win 6-1 before getting an emphatic 6-2 second set win to secure the match. The win is the first of her collegiate career for Komar, who missed last season due to an injury. The victory came over an impressive foe, with Dittman having won the Big Sky Conference MVP in 2021 and 2022 while playing at Northern Arizona.

At the next court was Geissler, who faced Abrams from NC State. Abrams struck first and edged Geissler in the first set by a margin of 6-3 before the Tiger responded with a perfect second set and blanked the Wolfpack player, 6-0. The decisive third set was decided as a ten-point tiebreaker, which Geissler won by a margin of 10-4. Geissler’s win marks her first of the season and came over a player that won 26 matches last season and ranked as high as No. 49 in the ITA singles rankings.

Next, Vishwase took on Illinois’ Yeah. The Fighting Illini player claimed the first set by a margin of 6-2 before going on to win 6-3 to grab the straight set win.

Rabinowitz faced Miller of NC State in singles action. Rabinowitz opened with a strong 6-3 win in the first set before Miller struck back with a 6-2 win in the second to force a ten-point tiebreaker. Rabinowitz and Miller contested an even third set, but the LSU Tiger finished strong and won 10-7 to clinch the win. It’s a strong first win of the season for Rabinowitz, who defeated a decorated doubles player that also grabbed 19 wins in singles play last year.

At the next court, N. Carrington faced Illinois’ Frazier. The two contested a tight first set that Frazier was able to narrowly grab as she edged Carrington by a score of 6-4. The second set was another close affair with Frazier able to pull ahead and win 6-3 to secure the win.

The final match of the day saw Longwell take on Heuser of Illinois. Heuser bested Longwell in the first set by a score of 6-3 and carried momentum into the second as she won 6-0 to secure the match.

Up Next
Day 2 of the Wahoowa Invitational will take place tomorrow. LSU is once again in action in the morning group and plays a round of doubles and singles starting at 9 a.m. CT.