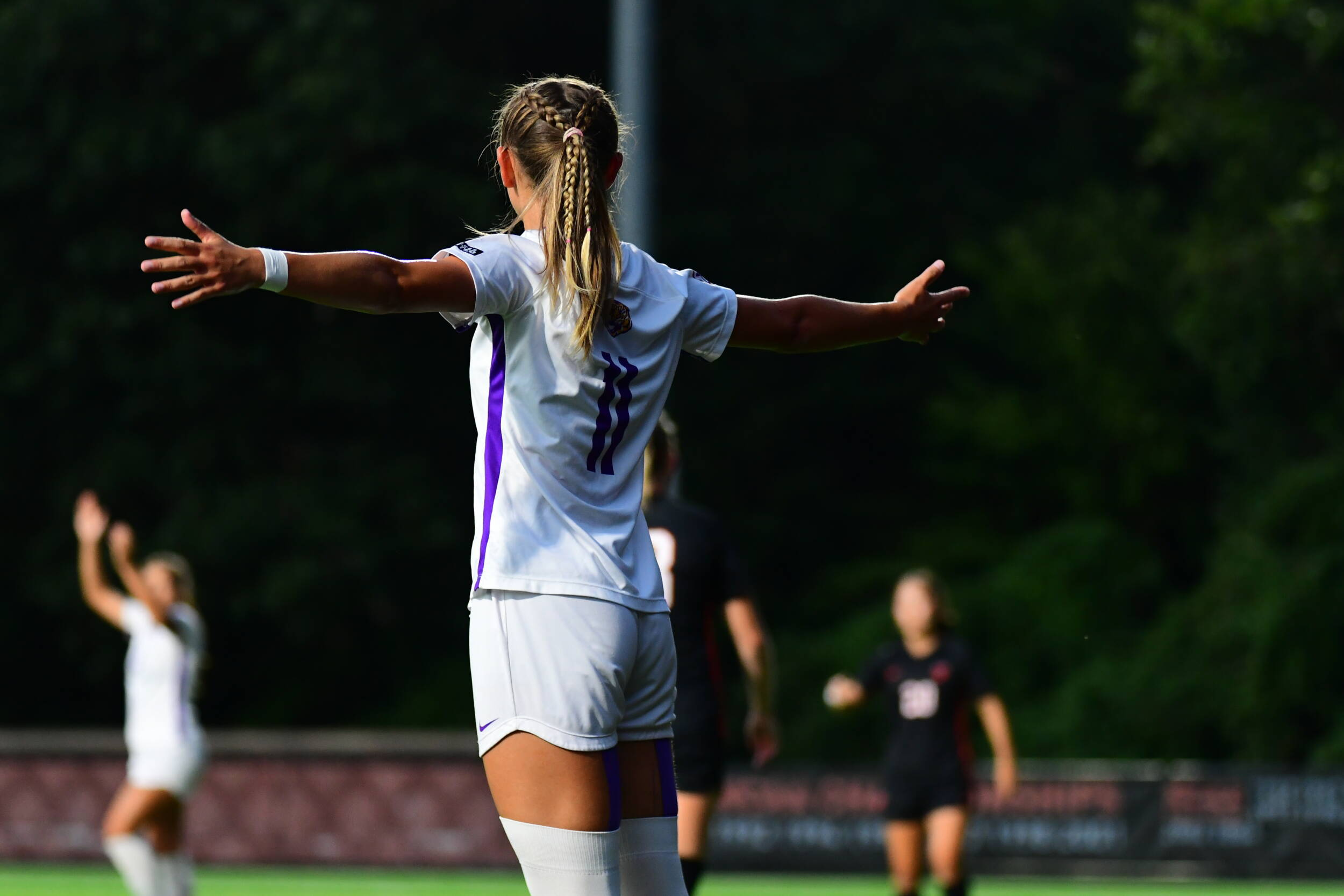 LSU took the lead in the 14th minute as forward Angelina Thoreson slotted a ball from 15 yards out into the bottom-left corner. The lead was extended to 2-0 in the 66th minute as midfielder Wasila Diwura-Soale sent a bouncing header into the back of the net.

“We’re really thrilled,” head coach Sian Hudson said. “To come on the road and play well against a team like Princeton is an unbelievable performance. We had great moments and fantastic goals tonight. Every time we give this team a challenge, they step up and perform.”

The match opened with LSU on the attacking foot by shooting three times in the first six minutes. Mollee Swift registered her first save of the match in the 11th minute as she calmly collected a shot from outside the box.

The breakthrough came in the 14th minute. Thoreson received the ball around midfield on the right-flank and broke away with pace. Thoreson charged into the box and hit a right-footed effort from 15 yards out that slid past the goalkeeper and into the back of the net. LSU earned a 1-0 lead on the night and Thoreson recorded the first goal of her collegiate career.

“We’re so thrilled for Angelina,” Hudson said. “She’s done a great job laying goals on a plate for her teammates this season, so it was fantastic to see her get that goal tonight with a confident finish.”

LSU limited Princeton’s chances for the rest of the first half as Princeton only had three shots in the remaining 31 minutes. Swift picked up her second save of the night in the 43rd minute before the Tigers headed into halftime with a 1-0 lead.

The second half saw Princeton get more chances, but were limited in terms of the quality the chances came in. The second half opened with the goal keepers swapping saves. Swift stopped an effort 25 seconds in while Princeton’s Tyler McCamey saved an effort from forward Mollie Baker in the 56th minute.

LSU took a 2-0 lead in the 66th minute. Midfielder Brenna McPartlan lined up a free kick on the right side and sent a cross into the box. Diwura-Soale found herself unmarked and headed the cross goalward. The ball bounced and skipped past the goalkeeper and landed in the back of the net. The goal marked Diwura-Soale’s first of the season and second of her LSU career. For McPartlan, the assist was her second of the year.

“Wasila doesn’t grab many goals, but when she gets them, they’re big ones.” Hudson said. “I think that goal stopped their momentum and gave us additional confidence to go out and finish the game.”

Princeton searched for a goal but could not get good chances. Swift picked up two more saves in the 67th and 80th minutes to finish the day with five saves. The clean sheet was LSU’s second of the year, and first full game clean sheet for Swift this season.

Princeton outshot LSU by a margin of 14-7 and had more shots on goals compared to the Purple & Gold by a margin of 5-3. While Princeton won the possession battle by a margin of 59%-41%, LSU’s effectiveness in midfield and organization in defense led to Princeton’s opportunities being limited in quality to secure the win.

The Tigers will conclude the New Jersey road trip with a match against No. 9 Rutgers at 11 a.m. CT on Sunday, September 11.