"Greater Because of Her" - Celebrating 50 Years of LSU Women's Athletics. This week we recognize the terrific and tenacious D-D Breaux. 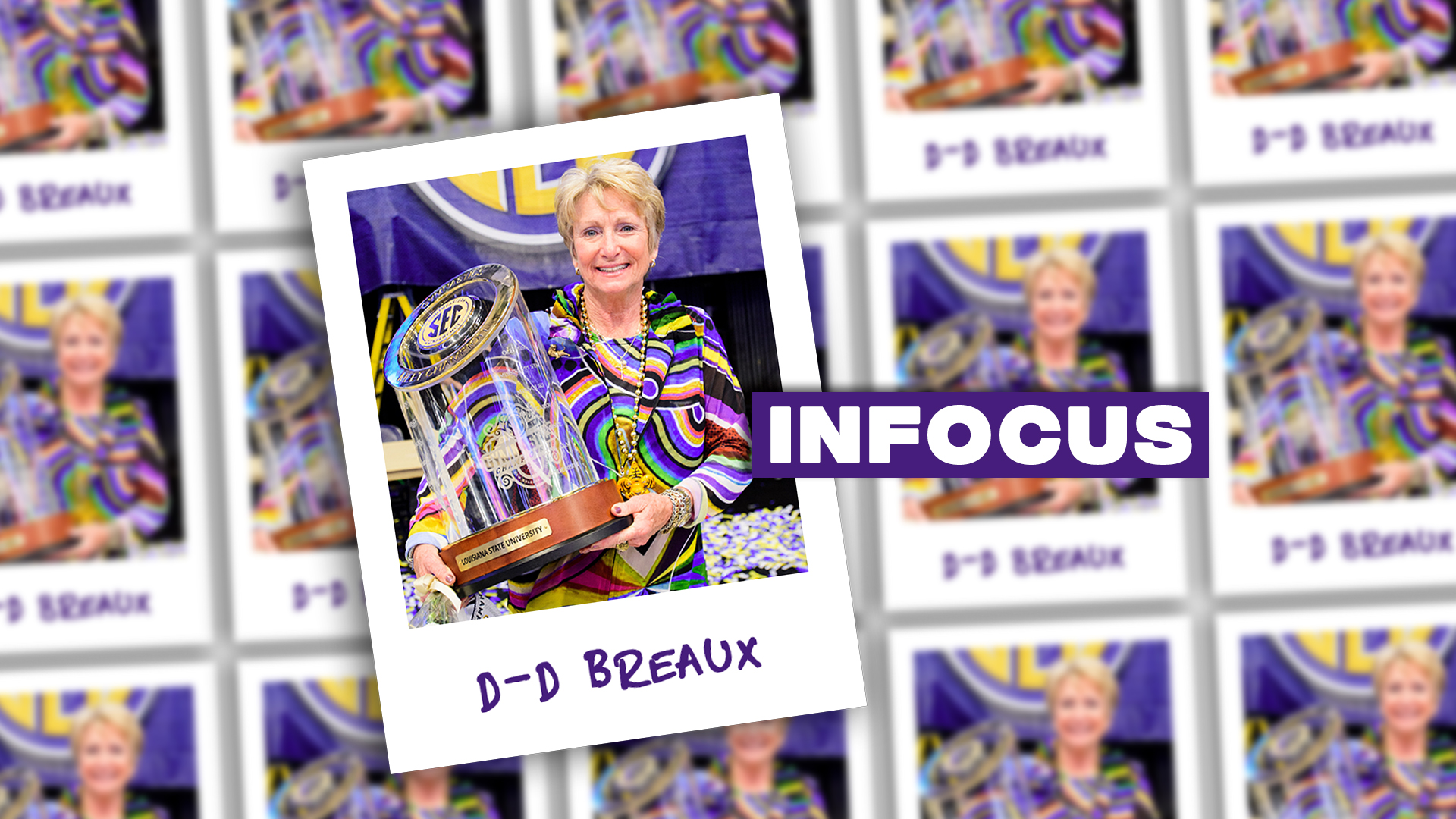 D-D Breaux, a Hall of Fame Coach, left a phenomenal legacy at Louisiana State University. During her 43 seasons as head coach of the gymnastics team, there wasn’t a day that she didn’t fight for her program and for all women’s programs.

As the nation this year marks the 50th anniversary of the passing of Title IX, Breaux reflected on her time at LSU and how she’s witnessed the progression of women’s athletics from when she first started until now.

Breaux’s tenure as one of the best college gymnastics coaches ever began in 1978, when she was named the head coach at LSU. This was also the first year that the program became a varsity sport.

Breaux coached the Tigers from 1978-2020. In her 43 seasons as head coach, she accumulated honors such as eight NCAA Championship Finals appearances, 22 SEC champions with 44 SEC titles, six SEC championships, 35 consecutive NCAA Regional appearances with 19 Regional titles, and much more.

Breaux carried the LSU flag in one hand and a sword for battle in the other. It was that fighter mentality that established and maintained LSU’s reputation as one of the premier collegiate gymnastics programs in the country.

Women’s athletics looked completely different when she first began coaching. There were no resources available, no scholarships, small budgets and support that often seemed resentful.

It was things like that that fueled her and gave her the motivation to keep going when times were tough. She knew where she wanted her program and other women’s programs to be, and she wasn’t going to stop until she saw change.

Now, women’s teams take charter flights just like the men’s teams, salary market value is at the top, and all the programs are fully funded.

“Although it’s been 50 years of Title IX, it’s only been 40 years since we’ve been a part of the SEC and NCAA,” Breaux said.

Pat Newman was the LSU coordinator for women’s sports, as well as the head women’s tennis coach, and she was an important piece in the fight to support women’s sports when Breaux first arrived at the university.

“People like Pat Newman, Paul Murrill, Bill Bankhead, Laura Leach, Ernie Hill, Kathy Hill, our Board of Supervisors, and so many others were very instrumental in bringing about a lot of change during a very difficult period for women’s athletics at LSU,” Breaux explained. “The Tiger Athletic Foundation began to support us with more vigor because of people like Laura Leach.

“When people began making major contributions to our program, it began to draw the attention of the administration, seeing that the community was willing to give to these programs.”

Breaux stated that former head baseball coach Skip Bertman was crucial in the growth of women’s athletics when he became the athletics director in 2001.

“He had the attitude that it was going to be a level playing field and everybody was equal. We had Skip as AD, and then Joe Alleva, and now Scott Woodward, so we have had a steady growth and our women’s programs have continued to prosper and grow and be supported at the very highest level,” said Breaux.

Now, women’s athletics at LSU has reached the peak of competition. She never stopped the fight to fill up all 13,000 seats in the PMAC. She and the staff were consistent about selling season tickets and brought the community back into their program. Nothing was for her. It was for LSU.

Breaux reached her attendance goal and marked history when she sold out the PMAC for the first time in 2015.

Post-retirement, she continues to be active in the community. Breaux was honored as a trailblazer at the 2022 SEC Women’s Basketball Tournament in conjunction with the conference’s 50th anniversary of Title IX celebration.

“I look back now as a spectator and still have the pride and the passion and the purpose for gymnastics and for LSU Athletics now that I had then. I think that bodes well for what LSU has given to me,” said Breaux.

Every step of her career was about creating the opportunities for women that she didn’t have.