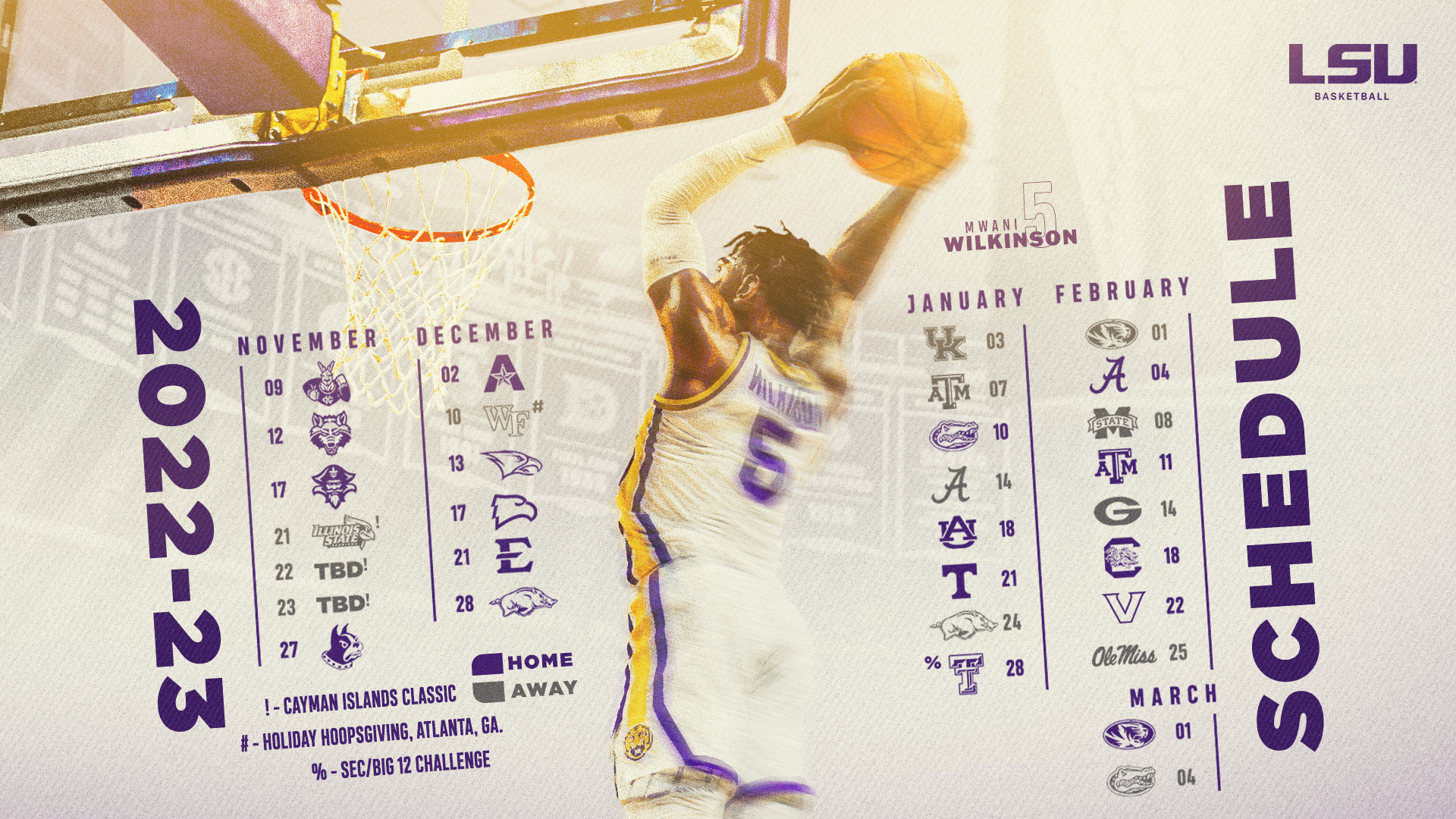 BATON ROUGE – The Southeastern Conference and LSU combined Wednesday to announce the 2022-23 men’s basketball schedule that will feature 18 home games in the Pete Maravich Assembly Center.

Tickets for the season are on sale now at LSUTix.net starting at $100 and more information can be obtained by contacting the LSU Athletics Ticket Office.

The Tigers will play nine teams at least once that won at least 20 games last season and will face 12 teams that advanced to post-season play with the possibility of playing at least one more depending on results during the in-season tournament.

New LSU Head Coach Matt McMahon will begin his tenure after a stellar career as head coach at Murray State. The Tiger staff has had to build a roster virtually from scratch bringing in some familiar players from the Racers program along with top transfers from the portal and some outstanding high school prospects.

The non-conference schedule will be highlighted by a game with Wake Forest, winner of 25 games a year ago and a quarterfinalist in the NIT. The Demon Deacons and the Tigers will meet in the Holiday Hoopsgiving event in Atlanta at State Farm Arena on Dec. 10. LSU defeated Georgia Tech in a battle of SEC vs. ACC a season ago.

LSU will also host an SEC/Big 12 Challenge game in Baton Rouge as Texas Tech comes to town on Jan. 28. Texas Tech had 27 wins and a spot in the NCAA Sweet 16 a season ago.

The Tigers open the 2022-23 and the first game for new Tiger coach Matt McMahon on Wednesday, Nov. 9 against Missouri-Kansas City. The Roos won 19 games a season ago. The opening eight days of the season will see LSU also host Arkansas State on Nov. 12 and UNO on Dec. 17. Both those teams were 18-game winners in 2021-22.

LSU will open Southeastern Conference play this year on Dec. 28 against Arkansas. The Razorbacks were 28-game winners a season ago and advanced to the NCAA Elite 8 a year ago.

The Tigers in-season tournament this year will be the Cayman Islands Classic on Nov. 21-23. LSU will play the opening game of the first day against Illinois State on Nov. 21 and will face either Akron or Western Kentucky on the second day. The opponent on the third day will be against a team from the other side of the bracket: Akron, Kansas State, Nevada and Tulane.

Starting times and television or streaming networks will be announced for the schedule in the coming weeks.