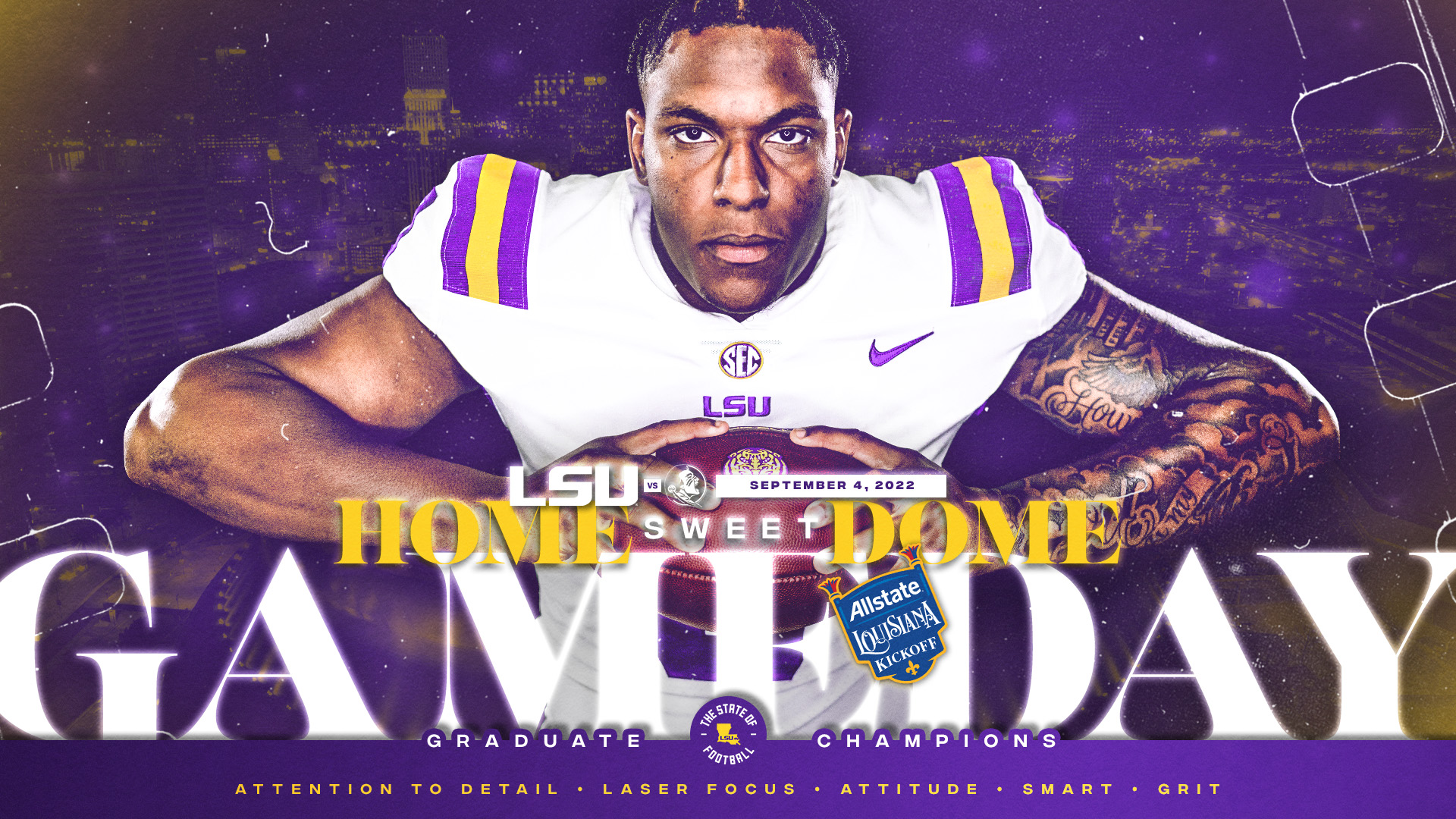 For the first time under the leadership of head coach Brian Kelly, the Fighting Tigers of LSU will kick off the 2022 season at the Caesars Superdome in New Orleans on Sunday night against Florida State.

Kickoff is set for 6:44 p.m. CT on ABC and the LSU Sports Radio Network.

Returning 14 starters from last year, the Tigers welcome a handful of talented newcomers on both sides of the ball.

The unit also adds transfer receiver Kyren Lacy, a Thibodaux, Louisiana native, who recorded 50 receptions for 668 yards and 10 touchdowns for the Cajuns of Louisiana-Lafayette. Noah Cain, who rushed for 790 yards and 12 touchdowns for the Nittany Lions, gives the running back room a boost with sophomore Armoni Goodwin and junior Josh Williams in the rotation.

The LSU defense, led by Matt House in his first year in Baton Rouge, returns their entire defensive front, headlined by BJ Ojulari, who will wear the coveted No. 18 for the Tigers this season. Ojulari recorded seven sacks in 2021, the most of any defensive lineman on the team, along with 54 tackles. The Marietta, Georgia native joins senior Ali Gaye, junior Jaquelin Roy and sophomore Maason Smith, a group primed to create havoc in the SEC this season.

In the secondary, there are some new faces with the addition of transfer cornerbacks Colby Richardson, Jarrick Bernard-Converse, Mekhi Garner and Sevyn Banks, along with safety Greg Brooks. Jay Ward, Todd Harris and Sage Ryan provide experience to the group, and look to be key contributors too.

“We came into camp with a lot of uncertainty at corner,” Kelly said in August. “Now, I think we’ve got six corners that we feel we can play. That’s a far cry from where we were a few months ago.”

Coach Kelly enters his 32nd year in coaching, but the preparation for a game still drives him like it’s his first. The day practice gets boring, Kelly says, is the day he steps away. It’s about being committed to the process, and for these Tigers, it has been no different entering Sunday night.

“What I love about this is the preparation,” Kelly said on Thursday. “Monday through Friday. I’m nervous every day, wanting to make sure I’ve prepared my football team in every aspect so they can be the best version of themselves. That’s my Why. That’s what drives me.”

On Tuesday after practice, Ojulari, Gaye and Mike Jones were selected as LSU’s team captains for the 2022 season, voted upon by their teammates.

Communication is key within any locker room, and for these three leaders, it’s what they do best. They’ve earned the respect of their teammates and coaches, which earned them the honor of representing the Tigers as captains.

“They’re really good communicators of our process and what we do every day,” Kelly said. “They’ve been very consistent in that. That showed amongst their teammates. We had our teammates vote, and they were the highest vote-getters.”

We're in The Lounge with @_mjones24 pic.twitter.com/m01WhiOoE5

The Seminoles are 1-0 after their Week 0 victory over Duquesne last Saturday, posting 638 yards of total offense, while holding the Dukes to just 164. Quarterback Jordan Travis went 11-of-15 for 207 yards, averaging 13.8 yards per attempt.

FSU was effective in the run game as well, utilizing three different backs that each went over 100 yards rushing. Treshaun Ward recorded 127 yards and two touchdowns, while Trey Benson and Lawrance Toafili had 11 carries for 105 yards and a touchdown and 13 carries for 101 yards and a score, respectively.

“Florida State is extremely athletic,” Kelly said. “They have two big inside defensive tackles that are going to be a challenge. Athletic on the edge, too. But we knew this. Our execution, in terms of the offensive line, is going to be based upon our ability to run the ball. You’re not going to out-run this defense. They can move sideline-to-sideline really well.”

All eyes will be on the Big Easy for a stand-alone, primetime and sold-out showdown on Sunday night.

The dawn of a new season is upon us, and there’s no better place for The Path to begin than Home Sweet Dome in Louisiana.