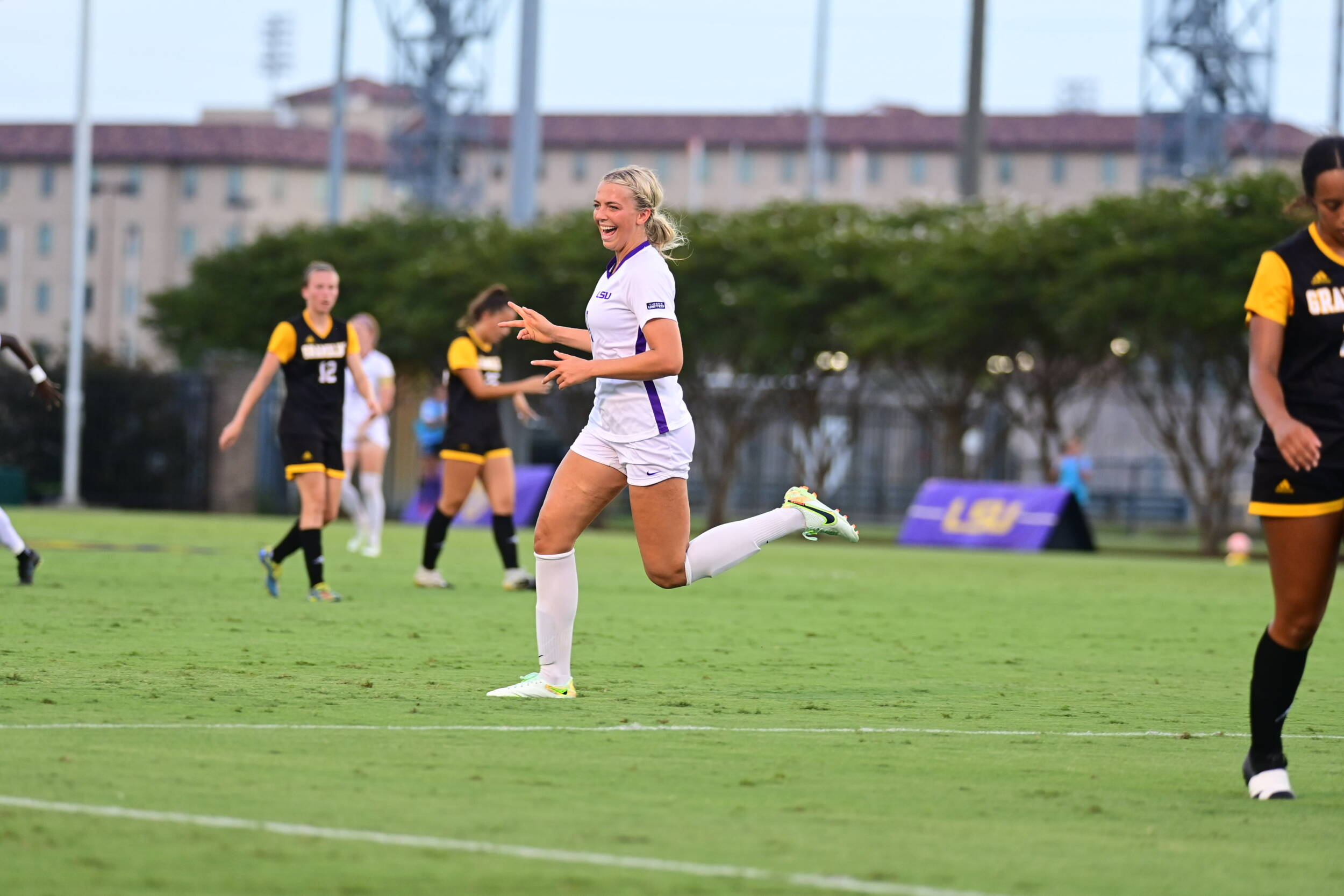 BATON ROUGE, La. – Freshman Ida Hermannsdottir grabbed herself a brace with goals in the 27th and 82nd minute as the LSU soccer team (3-0-2) defeated the Grambling State Tigers (2-3-0) by a score of 3-1 on Friday night at the LSU Soccer Stadium.

Grambling State opened the scoring in the 8th minute as Samantha Diaz found the left corner from 15 yards out. LSU equalized in the 24th minute as forward Mollie Baker tucked away a finish from 12 yards out. Hermannsdottir gave LSU a 2-1 lead three minutes later with a superb long-range effort before scoring the final goal in the 82nd minute after shrugging off a defender and slotting a ball past the Grambling State goalkeeper.

“Credit to Grambling State for their performance today,” head coach Sian Hudson said. “They came and defended well as a unit and grabbed a goal against the run of play in the first half with a great finish. I don’t think we were at our best tonight as a team. As the game progressed, we certainly saw more of the ball and began to open them up more defensively. Overall, we’ve got to get back on the training ground and look at a few things before we hit the road for our big match against Southern Miss on Sunday.”

The first goal of the match came in the 8th minute as Grambling State struck first. Reece Scott played a pass into the box to Diaz, who cut inside on her left foot and lifted a shot from 15 yards out that beat LSU’s Bella Zanotelli and landed in the bottom-left corner.

LSU responded with energy to the early goal and looked for the equalizer. The moment came in the 24th minute as defender Laney Gonzales picked out an inch-perfect through ball into the box to find Baker. Baker took a touch and slotted the ball past Grambling State’s goalkeeper Madison Covey-Taylor and into the bottom left corner to make it 1-1 on the night. The goal was Baker’s third of the season while Gonzales’ assist was the first of her collegiate career.

The lead came for LSU only three minutes later as Hermannsdottir found the back of the net with a phenomenal shot. Forward Angelina Thoreson controlled the ball on the edge of the box and laid off a simple pass to Hermannsdottir, who came in charging from midfield. Hermannsdottir met the pass and smashed a first-time effort from 24 yards out that rocketed into the top of the net and beyond the goalkeeper to give LSU a 2-1 lead. The goal was Hermannsdottir’s second of the season and marked the second straight game the Icelandic international found the back of the net. Thoreson’s assist was her third of the season, a team high.

LSU continued to pile the pressure on through the end of the first half as Covey-Taylor secured saves in the 32nd, 34th, and 41st minutes to keep the scoreline at 2-1 heading into halftime.

Following a 30-minute lightning delay moments before the planned start to the second half, the teams went back into action in the second half. Baker came close to making it 3-1 on the night in the 63rd minute as her shot from the top of the box was only denied by the crossbar. Covey-Taylor denied LSU chances in the 50th and 69th minutes to take her save tally up to five, where she finished on the night.

The final nail in the coffin came in the 82nd minute as Hermannsdottir doubled her tally on the day and stretched LSU’s lead to 3-1. Baker picked up the ball in the final third and cut inside to beat two defenders and sent a through ball into the box. Hermannsdottir timed her run and shrugged off a defender before calmly slotting the ball past the goalkeeper from five yards out.

LSU outshot Grambling by a margin of 23-1, with the home team having eight shots on goal compared to the away’s one. In the possession battle, LSU won by a margin of 68% to 32%. Following Grambling’s early goal, LSU took control of the match and maintained it throughout.

Up Next
LSU hits the road and heads to Hattiesburg, Mississippi to take on the Southern Miss Golden Eagles at 1 p.m. CT on Sunday, September 4.