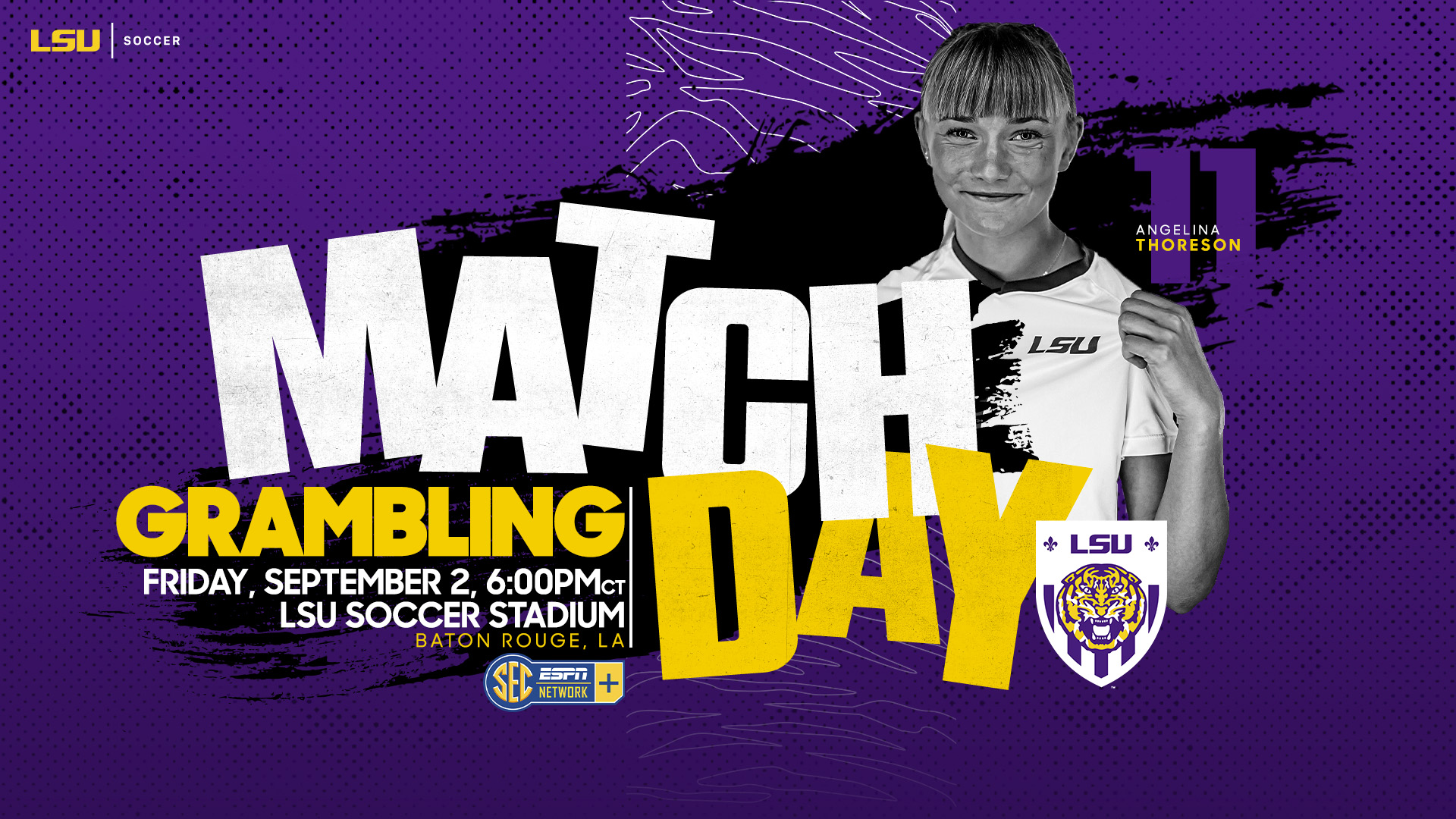 The match will be available online on SEC Network Plus. Links to the live stream and live stats can be found on lsusports.net.

There will be a free post-match kids’ clinic, a Ted Lasso themed t-shirt giveaway to the first 500 fans, and $2 hotdogs.

Friday’s matchup will be the first time LSU and Grambling meet in regular season competition.

The Tigers went 1-0-1 on the road against No. 14 Pepperdine and San Diego.

LSU began the California trip in Malibu with a 2-2 draw on Thursday, August 24, against No. 14 Pepperdine. The Tigers struck first against the Waves when freshman Sage Glover tallied her second career goal in the 43rd minute to take the lead into halftime. Shortly after, fifth-year senior Alesia Garcia scored her first goal of the 2022 season and seventh career goal in the Purple and Gold in the 54th minute.

The Waves responded and Tabitha LaParl scored the first goal for Pepperdine in the 64th minute, followed by an equalizing goal from Tatum Wynalda in the 69th minute. Neither team could find a third and the match finished all-even.

The Tigers continued down the West Coast to San Diego, where they beat the Toreros 4-1 in a triumphant win to end the road trip.

LSU struck first in the 33rd minute as Ida Hermannsdottir scored a tremendous goal from just outside of the box to take the lead into the second half. The second goal of the match came in the 54th minute as Raelyn Prince scored with a powerful shot from 22 yards out that landed in the bottom right corner. San Diego grabbed a goal back in the 73rd minute as Lexi Nobles headed home a corner to make it 2-1.

Sage Glover extended the Tiger lead 3-1 in the 79th minute as she timed her run to perfection and placed a ground cross into the back of the net. Forward Alesia Garcia concluded the scoring on the night in the 87th minute as she rounded the Torero goalkeeper and placed the ball in an open net.

Hermannsdottir and Prince scored the first goals of their collegiate careers.

Sage Glover, a freshman from Atlanta, Georgia, has scored three goals in four games for the Tigers.

The freshman tallied the first collegiate goal of her career in the season opener against Stephen F. Austin, which helped the Tigers take a 3-0 lead just two minutes into halftime.

In the 46th minute, Glover capitalized on a defensive error from the Ladyjack defense and sent a header that found the back of an open net to extend the LSU lead. It took only 12 minutes on the pitch to score the first goal of her collegiate career.

Glover began the California road trip on a high note and scored her second goal on Thursday, August 24, in the team’s matchup against No. 14 Pepperdine. Alesia Garcia played a through ball in the final third that found Glover, who timed her run perfectly to take a touch and then scored with a left-footed hit from ten yards out in the 43rd minute.

Her goal gave the Tigers a 1-0 lead in the match and tallied her second goal in three games for the Tigers in the process.

Her fourth collegiate goal came on Sunday, August 28, against San Diego in the Tigers final match on the road. The freshman helped extend the Tiger lead 3-1 in the 79th minute as she timed her run to perfection and placed a ground cross into the back of the net.

Glover was named SEC Freshman of the Week for her two performances in California.

Alesia Garcia has scored 27 collegiate goals- eight at LSU and 19 at the University of New Mexico. A potent attacker, Garcia scored three goals in the 2020 NCAA Tournament that helped New Mexico advance to the second round of the event.

In her first season with the Tigers in 2021, the Colorado native saw play in all 20 matches for LSU. She tallied seven points in LSU’s 8-0 win over Sam Houston with three goals and an assist, which registered as the eighth most points in a single game in program history.

Garcia’s first goal of the 2022 season came on the road against No. 14 Pepperdine, where the forward also tallied an assist. Garcia played a through ball in the final third that found Glover, who timed her run perfectly to take a touch and then score with a left-footed hit from ten yards out and gave the Tigers a 1-0 lead in the match.

The lead against the Waves was extended to 2-0 in the 54th minute, this time with Garcia scoring the goal. Midfielder Jordan Johnson arrived in the box and sent a shot on frame from 16 yards out. The Waves goalkeeper was unable to control the ball in a busy box and Garcia pounced on the loose ball opportunity and placed it into the back of the net.

Her second goal of the season came against San Diego, where she capped off the California trip in fashion for the Tigers and scored the fourth goal in the 87th minute. She latched on to a ball in midfield and outpaced the defenders to force a one-on-one with the goalkeeper. Garcia rounded the goalkeeper with a touch to her right-side and was collected enough to place the ball into the open goal.

The match against the Toreros marked the second straight game Garcia found the back of the net for the Tigers.

LSU hosted UCF on Sunday, August 21, and competed to a 1-1 draw with the Knights.

UCF struck first in the 30th minute from a direct free kick. Mollie Baker reacted shortly after halftime with her second goal of the season. Baker received the ball in the final-third and nutmegged a defender before bursting into the box and slotting a 16-yard shot past the goalkeeper and into the bottom left corner to make it 1-1 on the day.

Neither team could find the go-ahead goal and the match finished at an even 1-1 after 90 minutes of back-and-forth play.