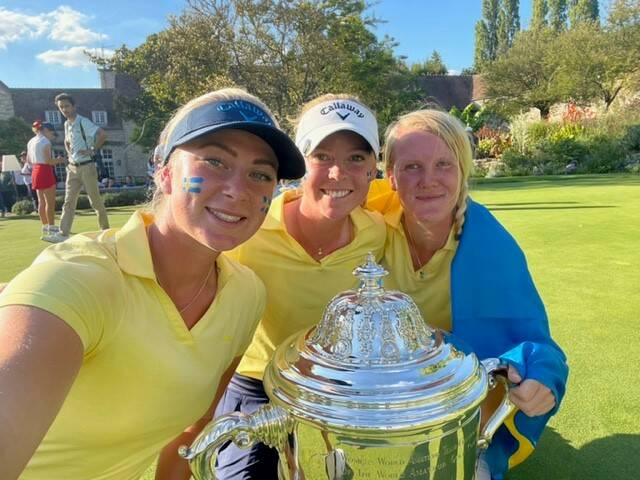 BATON ROUGE – LSU senior Ingrid Lindblad posted a final round of 3-under 69 to help Sweden rally from fourth to a tie for first in the final round of the World Amateur Team Championship for possession of the Espirito Santo Trophy Saturday in Paris.

Sweden would end up tied with the defending champions from the United States after four days of play and won the trophy on a scorecard playoff adding in the non-counting score in the play 3, count 2 format from the final round.

Sweden started the day out of medal position, but was able to get back to the top after Lindblad posted her score and teammate Meja Ortengren 2-under 70 to get Sweden to -5 for the day and -13 559. Saturday’s final round, like the opening round was played at Saint Nom-La Breteche (par 72) while the middle two rounds were at Le Golf National (par 71).

The United States playing behind the Swedish team posted 4-under 140 to also finish at 13-under par 559. Germany and Chinese Taipei, 1-2 entering the final round were unable to keep pace with the top two teams on the final day.

So, with both teams tied the rules call for the use of the non-counting score in the final round to determine the champion. Louis Rydquist for Sweden posted a 1-over 73, while Rachel Kuehn of the USA posted 2-over 74, giving Sweden the gold medal and possession of the trophy.

Normally Sweden would have the trophy for two years but because of the pandemic this is actually the 2021 event that was postponed so Sweden will have to defend the in 2023.

The USA take the silver medal and Germany at 12-under 560 will take the bronze.

Individually, Lindblad had a solid four days on the international stage with rounds of 74-66-71-69 to finish at 6-under par 280, tied for fourth, one shot out of the three-way tie for first at 7-under par. Lindblad moved up five spots in the final standings. Earlier in the tournament she moved up 47 spots from the opening round after her 66 in the second round.

Lindblad’s teammate, Ortengren had that lead most of the way and finished tied with Germany’s Helen Briem and America’s Rose Zhang.

Earlier in the week, after her 66 in the second round that moved Sweden into contention for the title, Lindblad set the tone for her team.

“A round like this means a lot to the team, even if it could’ve been lower,” said Lindblad, the 2021 European Amateur champion. “We’ve been talking about playing aggressive, which we tried to do (Thursday). A low round like this, puts us on top of the leaderboard and from there, we just have to keep going.”

For Sweden, it was its third Espirito Santo Trophy win, but its first in the event since winning in 2004 and 2008. The women’s event started in 1964. The men’s amateur team competition will start this coming week, playing for the Eisenhower Trophy, has been contested since 1958.