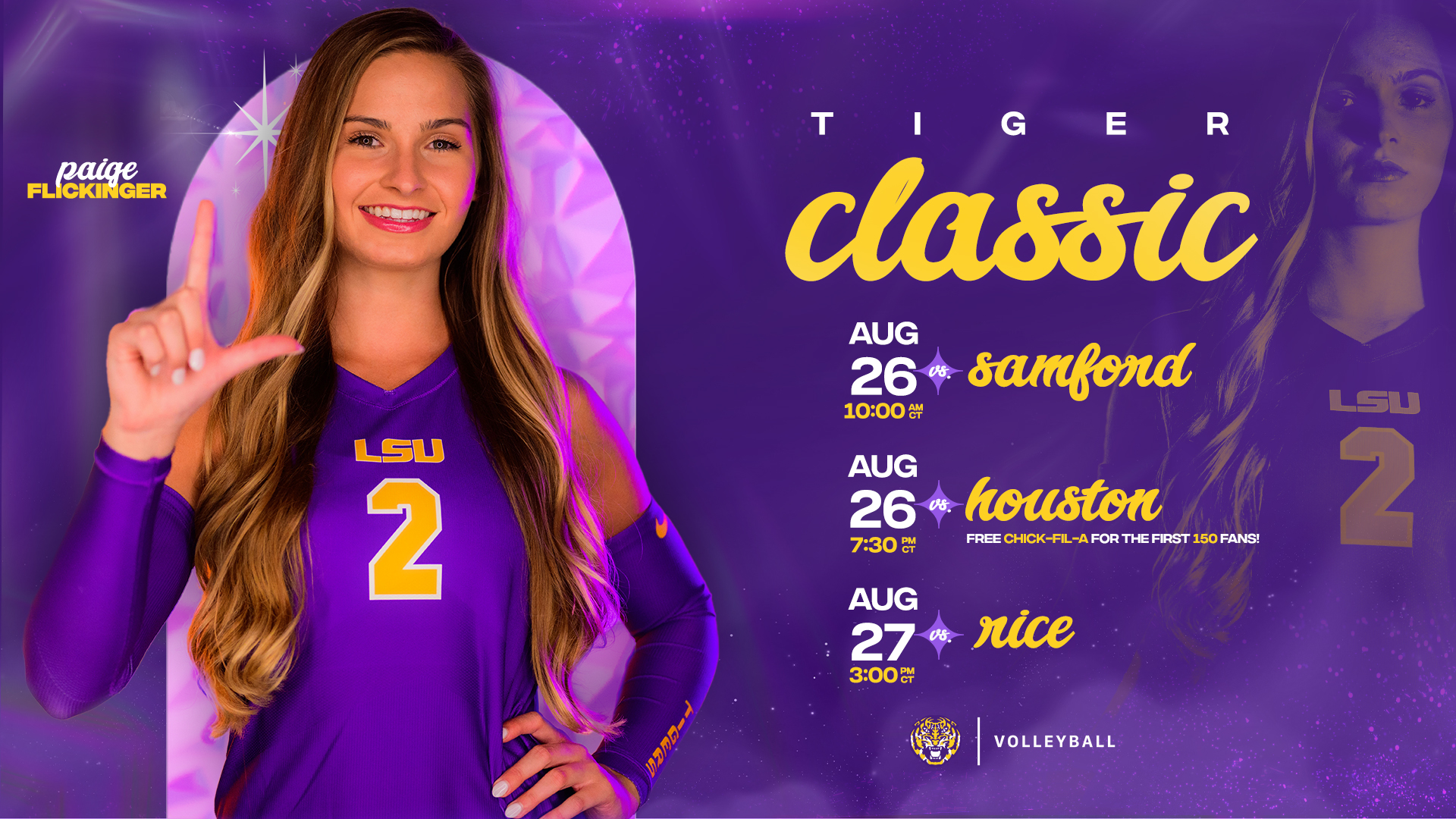 BATON ROUGE, La. – The 2022 season begins for the LSU Volleyball team as they host the Tiger Classic August 26-27 at the Pete Maravich Assembly Center (PMAC).

The Tigers will open the tournament Friday with a 10 a.m. match against Samford before taking on Houston in the nightcap at 7:30 p.m. The Purple and Gold will challenge Rice Saturday at 3 p.m. to conclude the opening weekend. All LSU matches this weekend will be streamed on SEC Network +.

LSU has a core group of returners who are led by middle blocker Anita Anwusi, outside hitter Sanaa Dotson and libero Ella Larkin.

Anwusi is a 2022 Preseason All-SEC Team selection after a breakout season in 2021 where she led the Tigers with a .346 hitting percentage – a mark that ranks No. 10 in the program’s single season record book. Anwusi also paced the team with 1.16 blocks per set (102 total), including 14 solo blocks.

Last season, Dotson pieced together nine double-digit kill matches, including a season-high 21 kills and a career-best .581 hitting percentage in a win against Alabama (Sept. 25, 2021). The Houston, Texas native transferred from Oklahoma for the 2021 season and is LSU’s top returner in terms kills as she averaged 2.32 per set (181 total).

Larkin, who was named to the 2021 All-SEC Freshman Team, turned in 15 double-doubles in assists and digs, and leads all returners with 2.79 digs per set (301 total) and 23 aces last season.

Other key returners are outside hitters Paige Flickinger and Samarah Hill. Both Flickinger (2020) and Hill (2019) were named to the SEC All-Freshman team. Hill will be making her first appearance since the 2020 season due to injuries.

The Samford Bulldogs are picked second in the SoCon Preseason Coaches’ Poll after an 11-18 2021 season that included a 9-7 mark in conference play. The Bulldogs are a veteran-led bunch highlighted by outside hitters Kenya McQuirter and Lauren Deaton. Both McQuirter and Deaton were 2021 All-SoCon selections. McQuirter led the Bulldogs last season with 4.29 kills per set (395 total) and Deaton followed with 3.37 kills on average and chipped in 27 total aces.

Houston is looking to build off last season’s success. The Cougars were 25-7 overall and 15-5 in the American Athletic Conference (AAC). Houston had four 2021 All-AAC selections, including Katie Georgiades who was the 2021 AAC Libero of the Year. Georgiades ranked ninth in the NCAA with 5.39 digs per set and No. 2 in the country with 663 total digs. Middle blocker Rachel Tullos and outside hitter Abbie Jackson was tabbed first-team along with Georgiades. Tullos had a .344 hitting percentage and was No. 7 in the NCAA with 151 total blocks (1.23 per set), and Jackson totaled 4.03 kills per set and had 45 aces last season. Setter Annie Cooke was a second-team honoree and ranked No. 2 and No. 3 in the AAC with 10.08 assists per set and 41 aces, respectively.

Rice was a 2021 NCAA Tournament participant after finishing the season 20-7 overall with a perfect 12-0 mark in Conference USA matches (C-USA). The Owls enter the season receiving 50 votes in the 2022 AVCA Preseason Poll. Rice is led by their two-time C-USA Setter of the Year Carly Graham (2020-2021). Graham paced the Owl’s offense with 11.1 assists per set and 25 aces last season. Middle blocker Anota Adekunle – a C-USA First Team selection – averaged 2.61 kills per set and team-highs of .406 hitting percentage and 1.09 blocks per set. Outside hitter Ellie Bichelmeyer rounds out Rice’s top returners. Bichelmeyer averages 2.06 kills per set behind a .306 hitting percentage and added 55 total blocks on her way to a 2021 C-USA Second Team selection.

LSU boasts a 38-17 overall record against the 2022 Tiger Classic field. The Tigers are 2-0 against Samford including last season’s four-set victory in Birmingham, Ala (Sept. 17, 2021). LSU is 17-12 overall versus Houston and are on a three-match winning streak. The last time LSU and Houston met was in 2019 and LSU is 9-1 all-time when playing the Cougars in Baton Rouge. Although the Tigers leads Rice in the all-time series 19-5, they are looking to snap a two-match losing streak which includes last season’s loss (Sept. 10, 2021). Saturday will be the first time LSU will host Rice since Sept. 11, 2010, when the Tiger claimed a 3-1 victory.

Free parking for Friday’s 10 a.m. and 12 p.m. CT matches is available in Lot 404 and in the public parking lot on the corner of W. Chimes St. and Cypress Dr. in the North Zone of LSU’s parking map.

For matches which are scheduled after University class hours (4:30 p.m.), all non-gated parking lots near the Maravich Center will be open to fans for free.