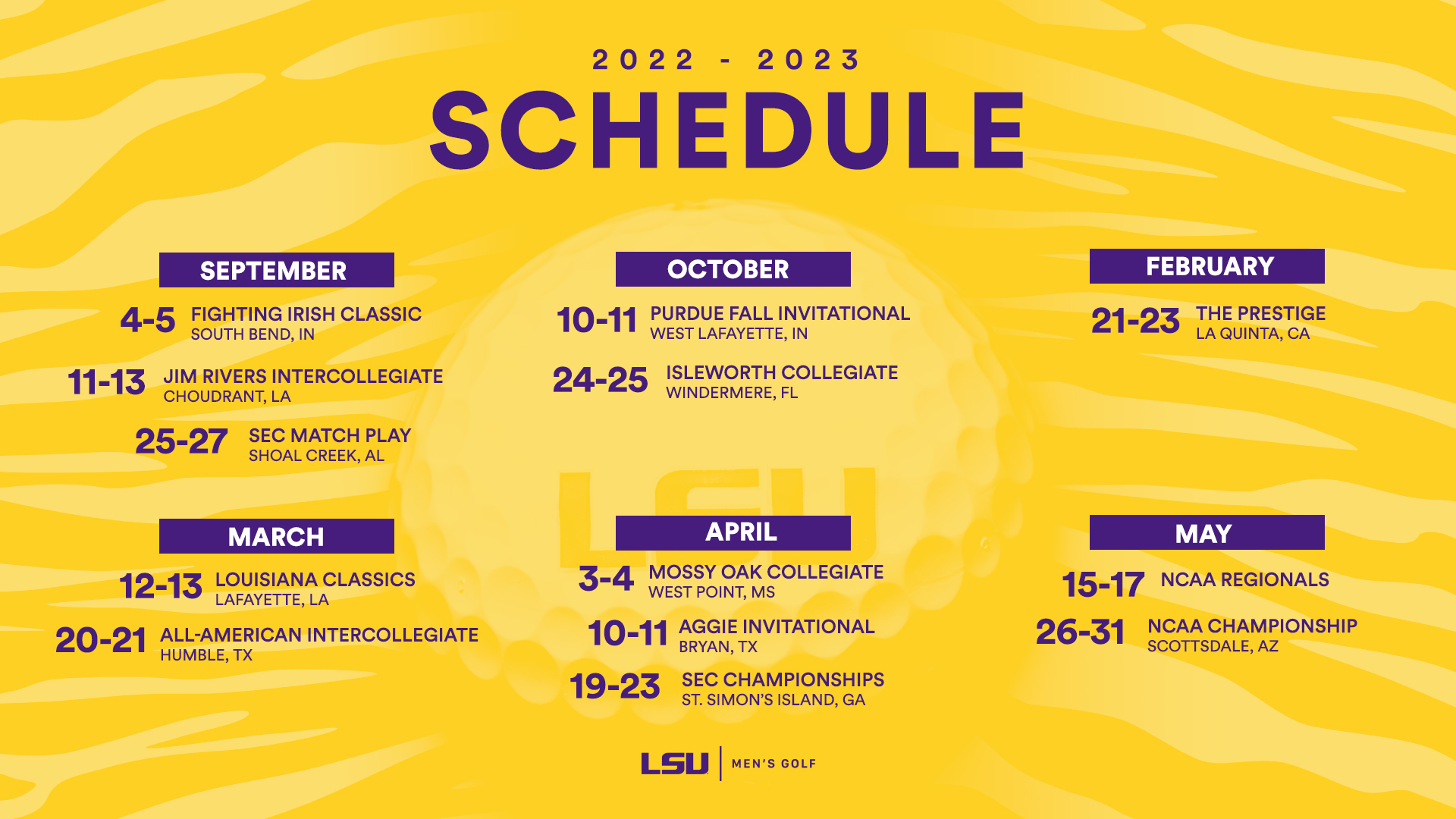 BATON ROUGE – LSU Director of Golf and men’s head golf Coach Chuck Winstead has announced a 10-tournament schedule for 2022-23 that will take his Tigers to some of the top courses and events to help get his team ready for post-season play.

“I’m excited about our schedule for this coming season and we will get things going very quickly,” said
Winstead. “Our fans will get to see us a couple of times at tournaments in state which is always great to have people cheering us on. These tournaments are all good preparation for the 2023 championship season that will take us to the SEC Championship and the NCAA Tournament.

The men’s golf team will see the first golf action for LSU on Sept. 4 and 5 as they travel to South Bend, Indiana to take part in the Fighting Irish Classic.

The Tigers will then make the first of two appearance in the state at the outstanding Squire Creek Country Club in Choudrant, for the Jim Rivers Intercollegiate on Sept. 11 through 13.

The month of September closes with an early look at how the schools look in the Southeastern Conference with the SEC Match Play at Shoal Creek, Alabama (Sept. 25-27).

October finds the golf team in Indiana and Florida as they will take part in the Purdue Fall Invitational on Oct. 10-11 and the Isleworth Collegiate Invitational, Oct. 24-25.

While the Tigers are making repeat appearances in the Jim Rivers and the Isleworth events, LSU will return to three events in the spring portion of the season as they work toward the league title event and the NCAA Regionals and Championships.

The Tigers will return to The Prestige in La Quinta, California, Feb. 21-23 to open their spring season before making another appearance in Louisiana in the Louisiana Classics at Oakbourne Country Club in Lafayette, March 12-14.

LSU will be in action back-to-back weeks, traveling to Humble Texas, March 20-21, for the All-American Intercollegiate set for the Golf Club of Houston. The Tigers will also return to West Point, Mississippi for the Mossy Oak Collegiate, April 3-4.

The regular season will conclude on April 10-11 when the Tigers travel to the Traditions Club in Bryan, Texas for the Aggie Invitational.

LSU’s post-season begins with the traditional trip to St. Simon’s Island, Georgia for the SEC Championships, April 19-23 followed by the NCAA Regionals (May 15-17) as the Tigers attempt to earn a spot in the NCAA Championships, May 26-31, in Scottsdale, Arizona.

The Tigers as a team had two wins a year ago and two runner-up finishes as a team. Michael Sanders had a win in the Turning Stone Intercollegiate at 9-under par 207 and Nicholas Arcement shot 13-under 203 to win the San Diego Classic. Drew Doyle was also a winner for LSU last year with a 6-under 210 at The Hayt in Ponte Vedra Beach, Florida.

All three players will be back for the Tigers in 2022-23 along with Graduate Student Garrett Barber, who has been the Louisiana Player of the Year the last three seasons and averaged a team best 71.15 with four top five finishes in the 2021-22 season.

“We have a lot of good players returning who were tournament winners and earned honors last season,” said Coach Winstead. “They have been through the ups and downs of a college golf season and they are excited for us to get going Labor Day Weekend when we travel to South Bend.”