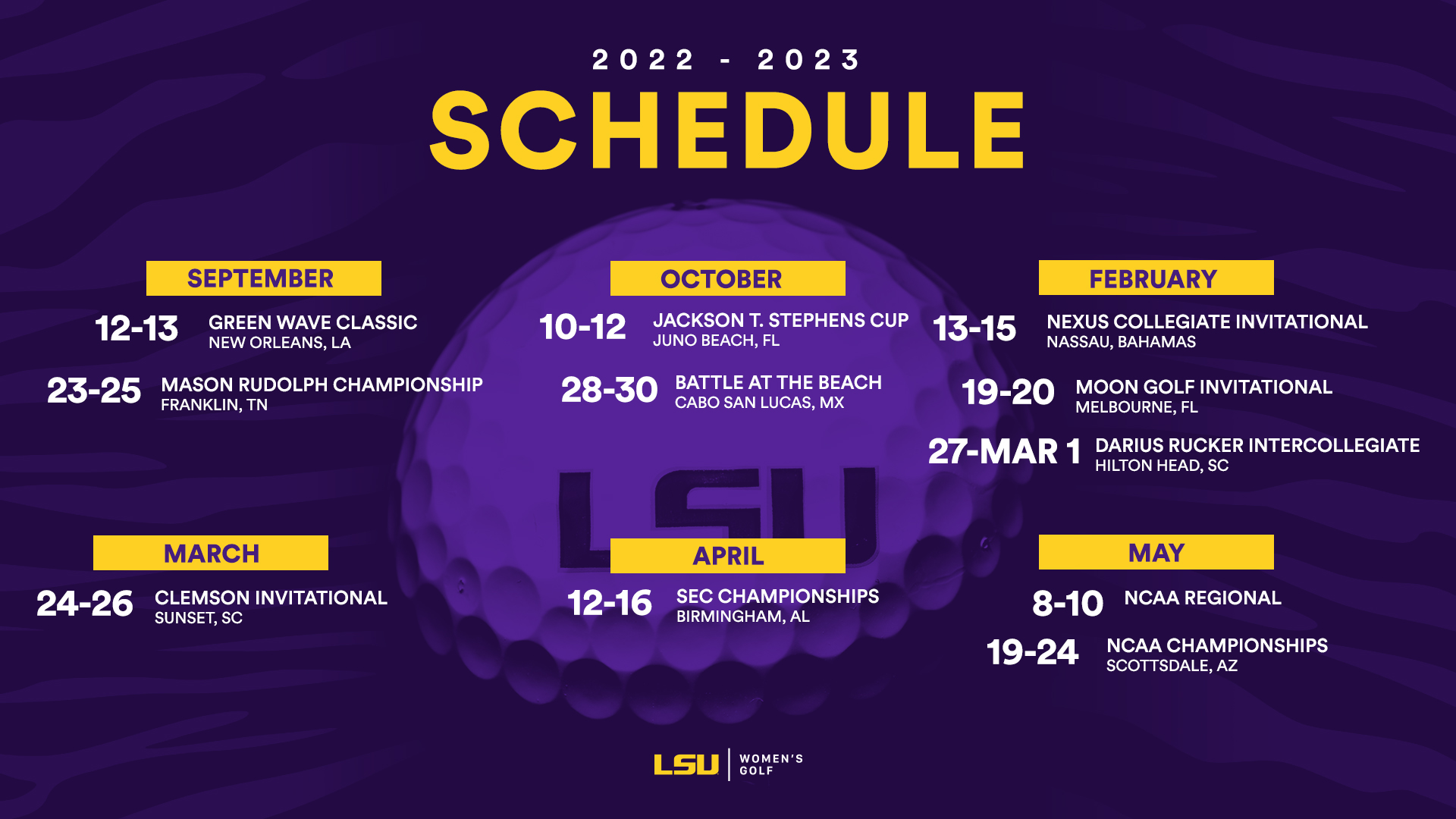 BATON ROUGE – After a stellar season that saw the LSU women’s golf team win three times, advance to the NCAA Championships for the second straight year and win the first Southeastern Conference Championship in 30 years, the Tiger golf team looks ahead to a 2022-23 season that will begin in just one month.

That tournament schedule will open Sept. 12-13 and it will open in Louisiana as LSU will take part in the Green Wave Classic at the Bayou Oaks at City Park South Course. The South Course was restored and reestablished in 2017.

The eight regular season tournaments will feature stroke play and match play to help prepare the Tigers for the defense of their SEC Championship, April 12-16, 2023 at Greystone Golf Club in Birmingham and then the NCAA Championships which will conclude for the third straight year at the Grayhawk Golf Course in Scottsdale, Arizona, May 19-24.

“The past few years I didn’t think our schedule could get much better but it has and that is a credit to the ladies on the team that have worked hard, performed well and earned invitations into some of the most prestigious college events in the country,” said LSU Women’s Golf Head Coach Garrett Runion, who earned SEC Co-Coach of the Year honors in 2022.

LSU’s fall schedule will include a return Sept. 23-25 to the Mason Rudolph Championship in Franklin, Tennessee for the first time since the 2019-20 season. LSU finished third in the 2012 NCAA Championships on the Vanderbilt Legends Club layout.

The Tigers will next defend their title in the three-day nationally-televised Jackson T. Stephens Cup which will be contested this year at the prestigious Seminole Golf Club in Juno Beach, Florida. The Stephens Cup, contested last year in Arkansas, features 54 holes of stroke play, followed by a final round of match play.

All three days of competition, Oct. 10-12, will be broadcast on the Golf Channel. The course hosted the Walker Cup in 2021 and will be hosting its first nationally-televised collegiate event.

“The Stephens Cup will certainly be a highlight,” Runion said, because one, we are the defending champions; two, it’s at Seminole Golf Club and three, it will be televised live on the Golf Channel. The ladies have gotten used to playing on TV as we played four times on live TV last year and look to do the same this year.”

The fall ending tournament and the spring opener will take the Tigers out of the country, traveling to the TCU Battle of the Beach (Oct. 28-30) at Cabo San Lucas, Mexico and the Auburn hosted Nexus Collegiate Invitational (Feb. 13-15) at Nassau in the Bahamas.

“The team is especially excited to travel outside the country with tournaments in Mexico and the Bahamas. Those are definitely tournaments the ladies circle on their calendar and will be working hard to make those trips,” the fifth-year women’s head coach said.

LSU will finish the spring regular season with two tournaments they have been regular participants in – The Moon Golf Invitational (Feb. 19-21) and the Darius Rucker Intercollegiate (Feb. 27-March 1) before defending their title at the Clemson Invitational in Sunset, South Carolina.

“Last year we had the 10th-ranked strength of schedule and I expect this schedule to be about the same,” said Runion. “It’s also nice when you have three opportunities to defend your title from the year before. All in all, it is a great schedule with strong competition that will prepare us for post-season golf.”

Stone has turned into an exceptional match play golfer who turned matches in the SEC finals and the Curtis Cup for wins and after a T2 in the Augusta Women’s National Amateur, was the co-medalist in the U.S. Women’s Amateur with a tournament record 8-under 65 in the second qualifying round.

Tejedo earned second team All-SEC honors and was a gold medalist for Spain in the World University Games in Torino.

Newcomers to this year’s team will be transfer Aine Donegan from Indiana and freshmen Edit Hertzman and Taylor Riley.