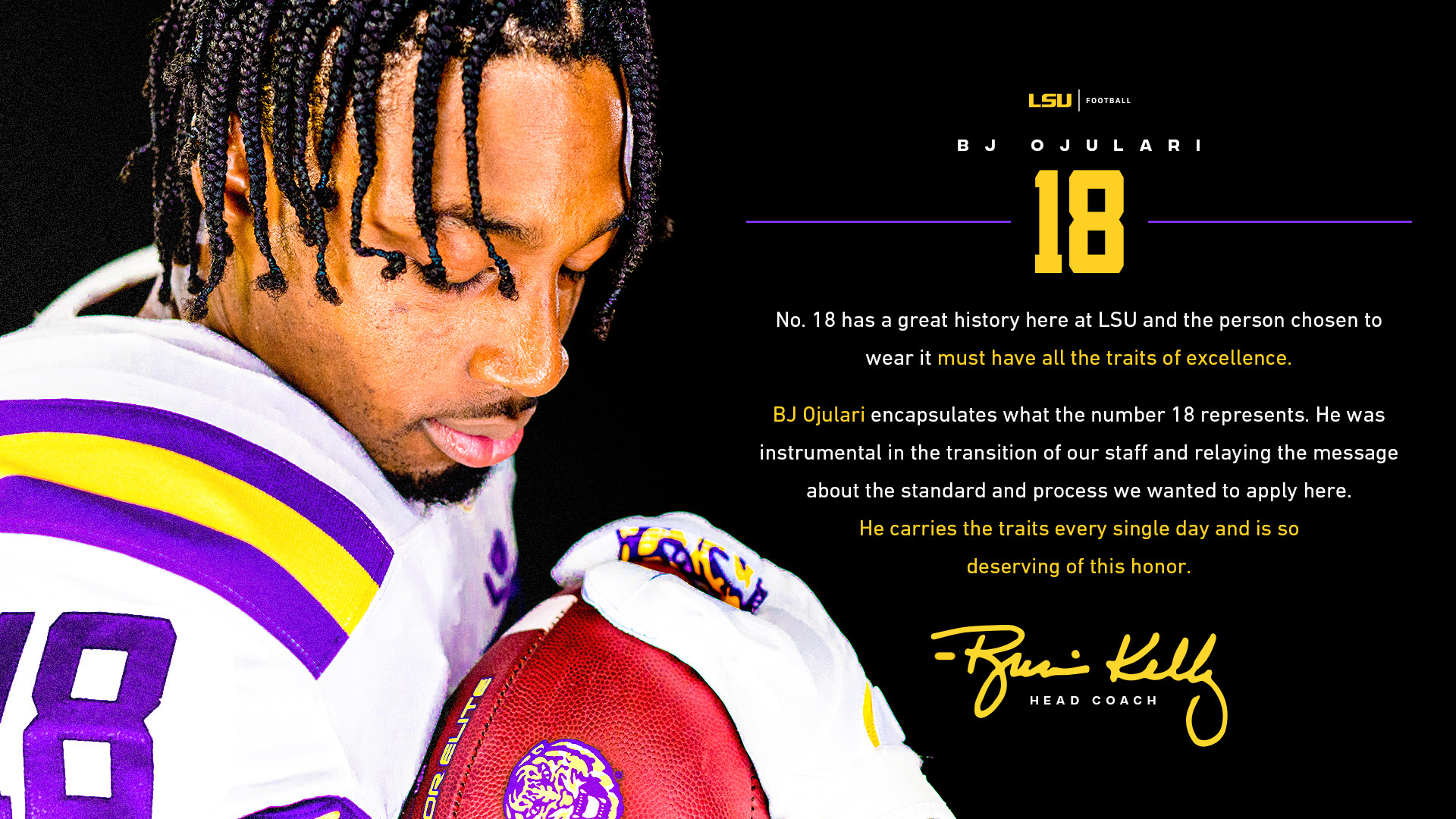 BATON ROUGE – BJ Ojulari, a preseason All-America candidate who has represented the LSU football program at a NCAA Leadership Symposium as well as participating in numerous community service events, has been awarded the prestigious No. 18 for the 2022 season, head coach Brian Kelly announced in front of the team following Saturday’s practice.

Ojulari was presented with his new jersey by Kelly on the practice field as the Tigers wrapped up their third day of preseason drills.

“The No. 18 is the player who brings all those traits of someone who leads in an extraordinary manner,” Kelly said. “The attention to detail, great focus, represents the program in a positive way in the classroom, in the community and on the field.

“His teammates, coaches and the entire staff believe BJ Ojulari embodies what the number 18 represents. He carries our traits of excellence every day on and off the field.”

Ojulari, a junior from Marietta, Georgia, joins an elite list of former Tigers who have had the honor of wearing the number. Most recently, linebacker Damone Clark and kicker Avery Atkins wore No. 18 for the Tigers in 2021.

Entering his second season as s starter for LSU in 2022, Ojulari has twice earned SEC Defensive Lineman of the Week honors during his career. He’s recorded 71 tackles, 16.5 tackles for loss and 11 sacks in his previous two seasons with the Tigers.

LSU’s tradition of No. 18 began in 2003 when quarterback Matt Mauck guided the Tigers to their first national championship since 1958. Mauck, now a dentist in Denver, passed his number down to running back Jacob Hester, who went on to lead the Tigers to the 2007 national title.

It was the outstanding traits – both on and off the field – of Mauck and Hester that resulted in No. 18 becoming the number worn by the Tiger who best epitomizes what it means to be an LSU football player.

The No. 18 LSU jersey hangs in the College Football Hall of Fame in Atlanta.

The Traits of Excellence needed to earn No. 18

His teammates, coaches and the entire staff believe BJ Ojulari embodies what the number 18 represents. He carries our traits of excellence every day on and off the field. pic.twitter.com/mxywbR9P7w

The newest member of the 1️⃣8️⃣ fraternity was an absolute no brainer. He embodies everything it means to be a LSU Tiger on and off the field. Welcome to the club @Bj_O9! #GeauxTigers pic.twitter.com/g5Mw70WJog