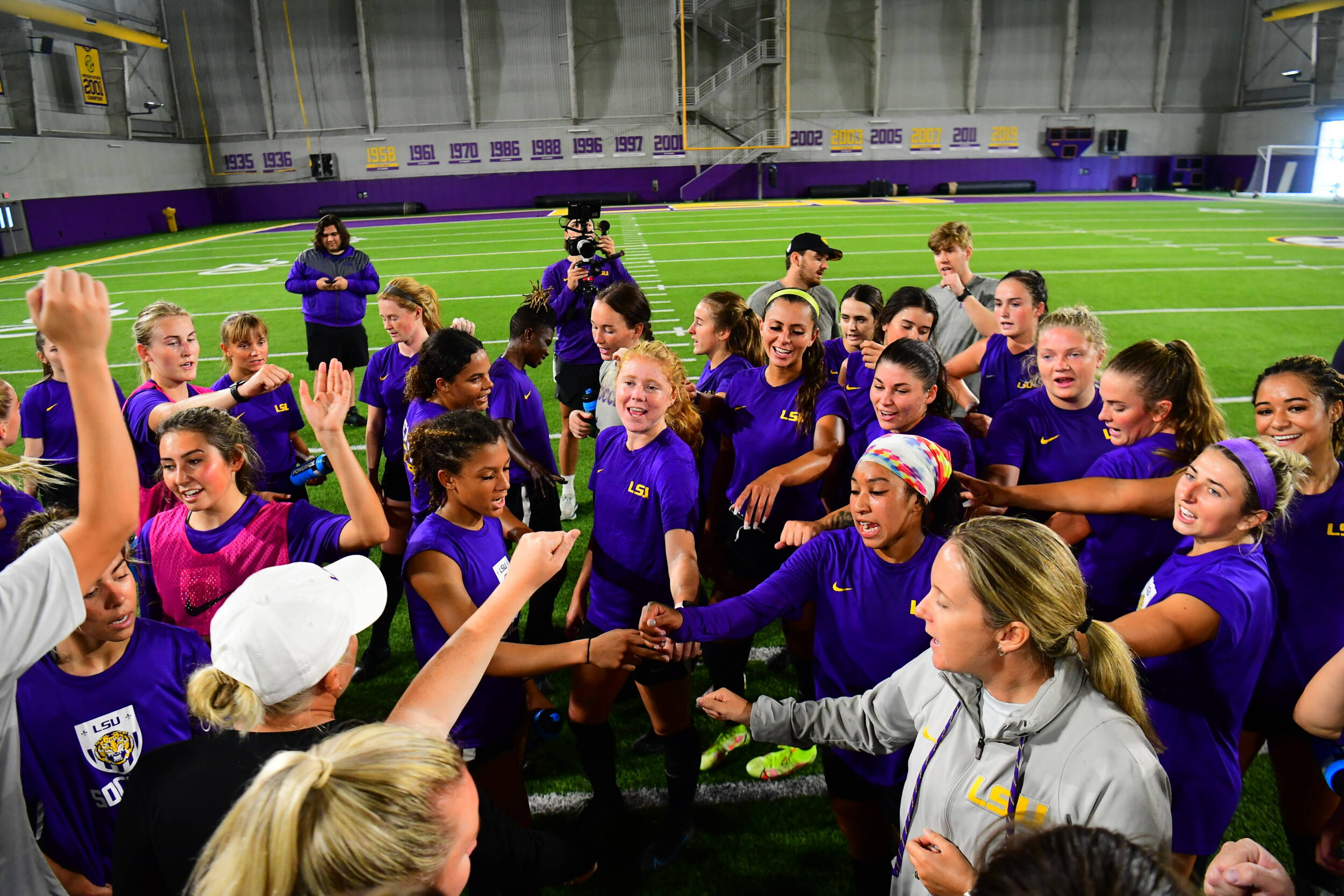 Baton Rouge, La. – After reporting to campus on Monday for team meetings, the LSU soccer team had its first two practices of the 2022 season on Tuesday (August 2). The 2022 Tigers feature 32 student-athletes and are led by third year head coach Sian Hudson, who is coming off an 11-8-3 season in 2021 that saw the program reach heights previously unseen.

The day began at 8 a.m. as the first practice of the day was moved to the LSU Indoor Facility due to a thunderstorm in the area. Despite the showers, the Tigers enjoyed a strong opening practice before splitting for lunch and treatments and reconvening for the second session of the day in the evening. All-in-all, LSU enjoyed a productive first day of preseason.

The Tigers will have a week of practice at the LSU Soccer Stadium before heading to the state of Texas for two exhibition matches against the Baylor Bears (August 11) and the Houston Wildcats (August 14). Following the exhibitions, the team will return to Baton Rouge in anticipation of its home opener against Stephen F. Austin at 6 p.m. CT on Thursday, August 18.

A wealth of defensive experience returns for the Tigers as fifth-year seniors Shannon Cooke and Lindsi Jennings prepare for their final season in collegiate soccer alongside fourth-year seniors Maya Gordon and Rammie Noel. These four players were four of nine outfield players to register over 1,000 minutes across last season and will look to lead this year’s team from the backline.

Senior goalkeeper Mollee Swift returns for her third season between the posts in Purple & Gold. The 2021 season was the best yet for Swift, who started all 20 games for the Tigers and finished the year with eight shutouts and a Goals Allowed Average of 1.25 per 90 minutes. Her 81 saves on the year ranked her 3rd in the SEC and she earned the first national honors of her career as she was named Top Drawer Soccer’s National Player of the Week and United College Soccer Coaches National Player of the Week on August 31 and September 1 respectively for helping the Tigers secure road wins at No. 15 USF and No. 19 UCF.

The 2022 roster features 32 athletes, 11 of which are newcomers to the squad. Five countries are represented in the squad (United States, England, Ghana, Iceland, and Sweden). Cooke, Kelci Bowers, Brenna McPartlan, and Tilly Wilkes hail from across the pond, Wasila Diwura-Soale comes from Ghana, Ida Hermannsdottir is a native of Iceland, and Angelina Thoreson is a proud Swede. Of the remaining 25 athletes, five are native to Louisiana and Texas while Florida and Colorado both have four players each. The remaining states of Arizona, Georgia, New York, Nebraska, North Carolina, Virginia, and Washington each have one representative on the squad.

The LSU soccer program is entering its 28th season of play and boasts an overall record of 251-236-64.