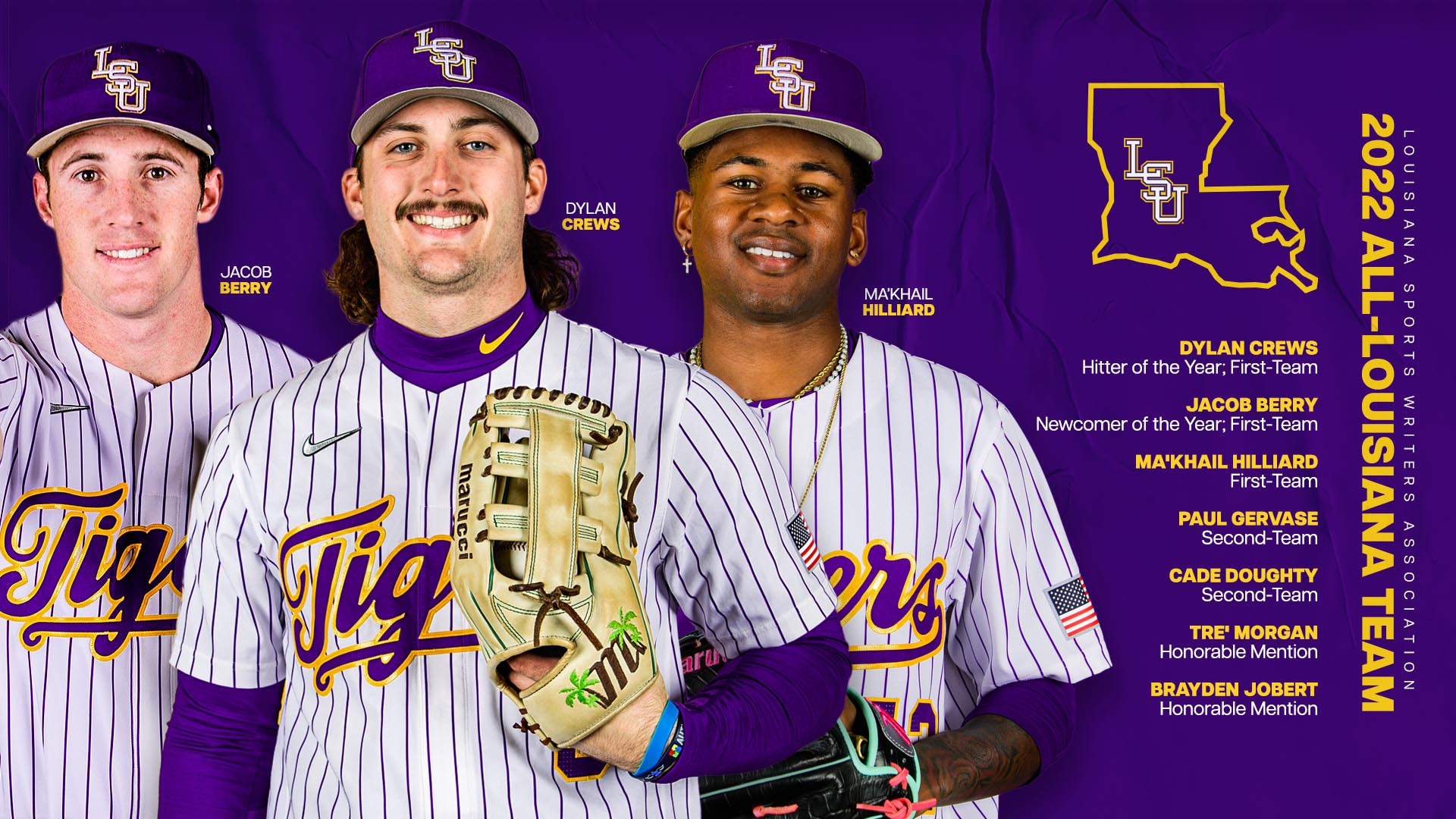 Sophomore centerfielder Dylan Crews was named the state’s Hitter of the Year, and sophomore third baseman Jacob Berry was voted Newcomer of the Year.

Crews was voted a 2022 consensus First-Team All-American and the SEC Co-Player of the Year, batting .349 with 11 doubles, four triples, 22 homers, 72 RBI and 73 runs.The Tigers’ centerfielder was voted a semifinalist for the Golden Spikes Award.

Berry, a product of Queen Creek, Ariz., was the first-round MLB Draft selection last week of the Miami Marlins. He was a 2022 Golden Spikes Award semifinalist, a second-team All-America performer and second-team All-SEC selection as he batted a team-high .370 with nine doubles, 15 homers, 48 RBI and 47 runs.

Hilliard, a native of Central, La., made 16 starts on the mound this season and posted a 7-1 record with a 4.56 ERA and 73 strikeouts in 77 innings. LSU was 9-2 in the 11 games that Hilliard started against SEC teams.

Doughty, the second-round selection of the Toronto Blue Jays in last week’s MLB Draft, batted .298 this season with 15 homers, 57 RBI, 56 runs and a team-high 19 doubles. He was voted to the 2022 NCAA Hattiesburg Regional All-Tournament Team after hitting .444 (8-for-18) with three homers, six RBI and seven runs.

Gervase, selected in the 12th round last week by the New York Mets, posted a 4-1 mark for the Tigers with a 1.85 ERA and six saves in 39 innings. He made 29 relief appearances, recording 15 walks, 52 strikeouts and a .157 opponent batting average.

Gervase, a product of Fuquay-Varina, N.C., recorded a 2.04 ERA and five saves in SEC regular-season games. He made three appearances in the NCAA Hattiesburg Regional, recording a win over Southern Miss and a save versus Kennesaw State. He allowed no earned runs on three hits in five Regional innings with three strikeouts.

Morgan, a 2022 SEC All-Defensive Team selection, hit .324 this year with 18 doubles, one triple, five homers, 54 RBI and 50 runs. The New Orleans, La., native joined Crews this summer as a member of the U.S. Collegiate National Team that claimed the bronze medal at Honkbalweek Haarlem in the Netherlands.

Morgan batted .500 (6-for-12) in the Tigers’ three-game sweep at Vanderbilt (May 19-21) with four doubles, three RBI and five runs, and he delivered the game-winning two-out, two-run single in the top of the ninth inning at Mississippi State (April 8), erasing a 2-1 deficit and sparking LSU to a 5-2 victory.

Jobert, a native of Slidell, La., finished second on the LSU squad this season in both home runs (18) and RBI (58). He was Named SEC Player of the Week after leading LSU to a three-game sweep at Vanderbilt (May 19-21), tying the LSU single-game record for RBI with nine in the series finale.

Jobert enjoyed a three-game stretch in late march when he recorded a remarkable five homers and 16 RBI. He collected seven RBI in LSU’s March 29 win over UL Monroe, becoming the first LSU player to reach the 7-RBI mark since March 17, 2017, when Antoine Duplantis recorded seven RBI versus Georgia.