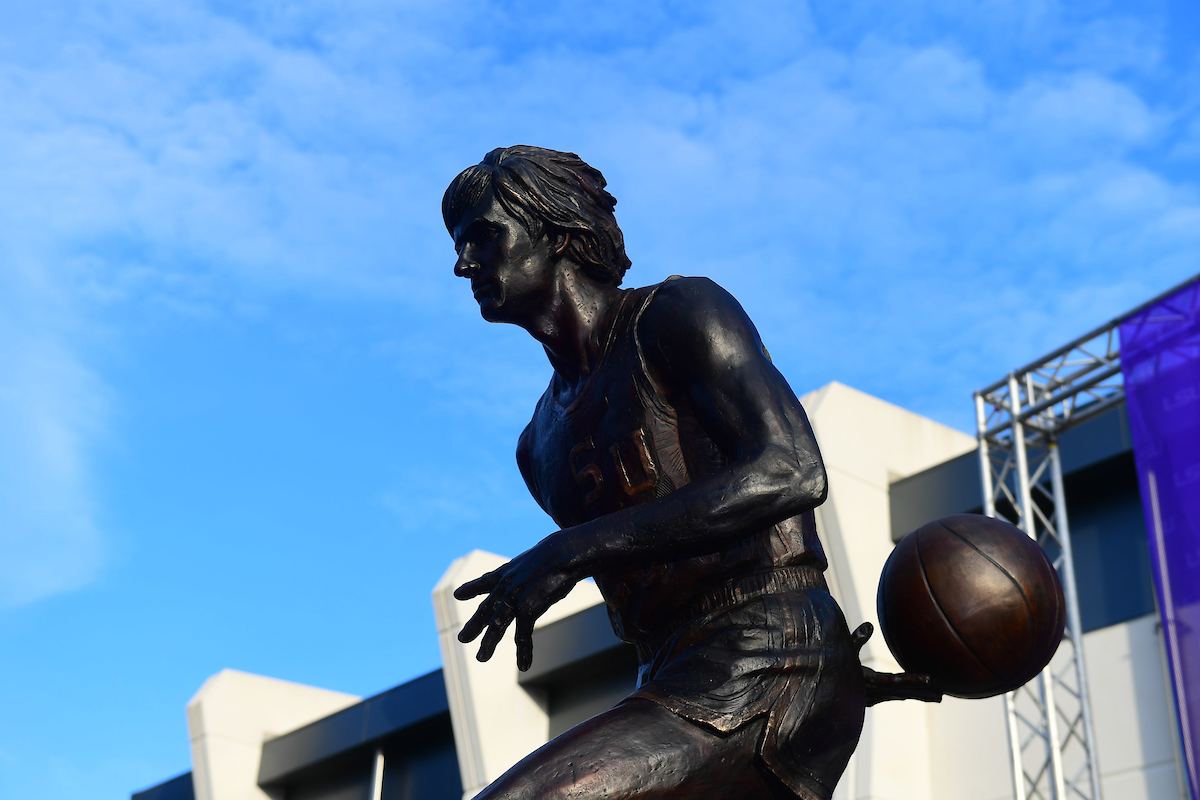 BATON ROUGE – For the third time, a statue of an LSU men’s basketball player was unveiled in the plaza in front of the LSU practice facility and this time, the statue honored the greatest scorer and one of the top showmen in basketball history.

Pistol Pete Maravich, who dazzled crowds at the John M. Parker Ag Center (the infamous “Cow Palace”) from 1968-70, had his likeness unveiled by his wife Jackie and sons Jaeson and Josh in ceremonies outside on the plaza on a beautiful sun-splashed late afternoon in Baton Rouge. The statue shows Pete at his best, with another perfect behind-the-back pass to a teammate for an easy bucket.

The pose was chosen by Maravich’s two sons.

Peter Press Maravich scored 3,667 points in his three seasons at a time when there was no three-point shot, no shot clock and despite not being able to play varsity as a freshman under then-NCAA rules. He finished with an amazing scoring average of 44.2 points a game, an average that would have been well over 50 points with a three-point shot.

He was considered to be one of the greatest creative offensive talents ever and one of the best ball handlers of all time.

Pete was the third pick of the 1970 NBA Draft by the Atlanta Hawks. In his 10 seasons, he played for the Hawks, New Orleans and Utah Jazz, and the Boston Celtics. He averaged 24.2 points and 5-plus assists in some 658 career games with four all-star game appearances.

In introducing the unveiling moment for the statue, emcee Dan Borne said, “But tonight, it is all about the man who wore 23 with the floppy socks and the shaggy hair. Both were of another time and place, but Pistol Pete’s fabled game is as current as this season’s box scores. Fifty-plus years later, he is and always will remain, timeless.”

Pete’s wife summed up her late husband in this way when she took the microphone:

“Over Pete’s lifetime, many have described him as an entertainer, artist, showman or basketball wizard. Whatever the adjective used, they describe and represent the joy and excitement Pete brought to the game of basketball.

“Every time a family member meets someone and they find out Pete was a relative, they always smile and have a story to share about a memory of him on the basketball court.

“Seeing fans smile, cheer and shout ‘Showtime’ inspired Pete to be the court magician and entertained that he was.

“He could truly manipulate the ball to do anything he wanted.

“His unassuming look, tall and skinny with floppy hair and socks gliding up the court only made him more intriguing to watch.

LSU fans are invited to come by the plaza area to take pictures with and of the three statues during the day.