12 Tigers Past and Present Set to Compete at World Championships 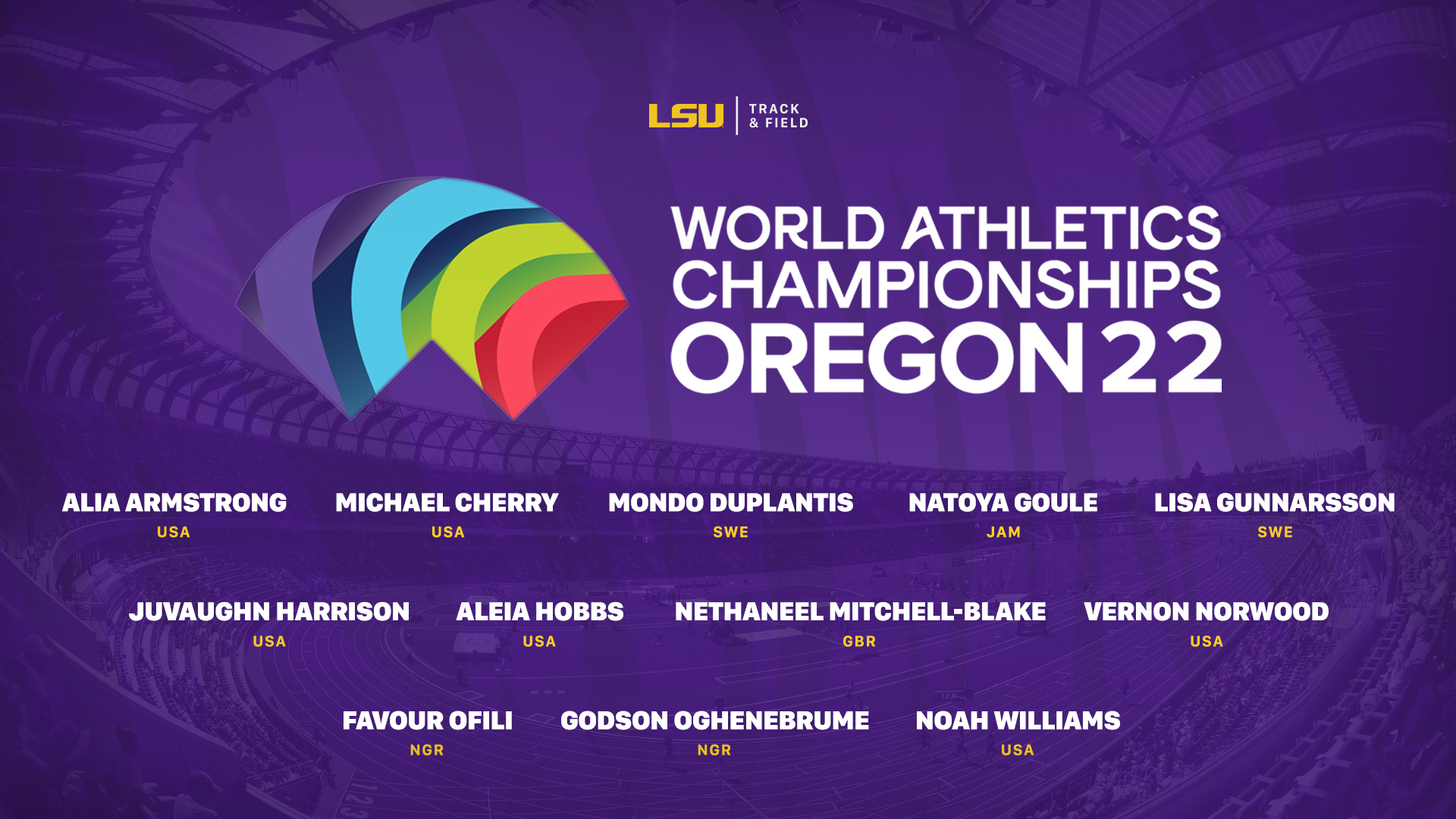 EUGENE, Ore. – LSU Track & Field will be well-represented at the World Athletics Championships this week, as four athletes from the 2021-22 team and seven former Tigers will be competing for their respective countries starting this Friday, July 15.

The World Championships will field over 1,900 athletes from 192 teams, spanning ten days and concluding on Sunday, July 24. All events will occur at Eugene’s Hayward Field.

Rising junior Alia Armstrong will look to continue her outstanding running in Eugene, as she competes in the 100m Hurdles for Team USA. She recently won a national championship for LSU in the same event in Eugene last month, posting a time of 12.57 seconds in the rain.

Her teammate Favour Ofili will also be competing, representing Team Nigeria in the 200m and 4x100m relay. Ofili is also coming off of an incredible season for the Lady Tigers, accumulating wins in both the 200m and 4×100 meter relay, as well as the 100m, at SEC Championships in May. Her 200m time of 21.96 broke the collegiate record in April.

Godson Oghenebrumene will also compete for Team Nigeria in the men’s 4x100m relay. Oghenebrume was an alternate in last year’s Olympic team and is coming off an impressive freshman campaign, in which he ran a time of 10.12 in the 100m, placing himself T-8th in LSU history.

Lisa Gunnarsson will compete in the Pole Vault for Team Sweden on day one at 7:20 p.m. CT. Gunnarsson, a two-time NCAA champion, shattered the LSU women’s vaulting record earlier this year with a vault of 15’ 3” (4.65m). She was also named to the CoSIDA Academic All-America Team for the third time last month.

Also competing for Team Sweden in the Pole Vault is former Tiger Armand “Mondo” Duplantis. All eyes will be on Duplantis, who begins on Friday, July 22, as he recently set the world record for outdoor vault with a height of 20’ 2.5” (6.16m), and looks to add another gold medal after winning at the World Indoor Championships earlier this year.

Noah Williams will be running for Team USA in the Mixed 4x400m Relay. Williams was part of the 2021 4x400m relay team at LSU that took home the gold at the NCAA Championships and helped propel the Tigers to a first-place finish in Eugene.

Three-time NCAA Champion and six-time All-American Aleia Hobbs will be running the 100m for Team USA after qualifying with a second-place finish in Eugene last month. Hobbs broke the low-altitude collegiate world record in the 100m in 2017 with a time of 10.85. She also has a gold medal to her name in the 4×100 relay from the World Relays in 2019.

Vernon Norwood will also represent Team USA, competing in the 4x400m relay on Saturday, July 23. He already sports two gold medal victories at previous World Championships, winning the same event in 2015 and 2019. He is 3rd all-time in the 400 meters at LSU with a time of 44.44 seconds.

Tiger alumnus Michael Cherry will be looking to continue a good run of form in the 400m on Sunday, July 17, at 1:05 p.m. CT.  World Athletics has Cherry listed as #2 in the men’s 400m World Rankings, with a season-best of 44.28 seconds. He could also potentially be joining Norwood in the 4x400m relay, where he took home the gold at the 2020 Tokyo Olympics and the 2019 World Championships.

Across the pond, former Tiger Nethaneel Mitchell-Blake will captain Great Britain, running the 200m and the 4x100m relay. He already boasts two trophy finishes in the relay at previous World Championships, placing first in 2017 and second in 2019. Mitchell-Blake ranks third all-time in LSU’s 200m history, posting a time of 19.95 seconds in 2016.

The World Championships will be available for viewing on NBC and NBC Universal. A full schedule of the Tigers’ events is below, listed in central time.