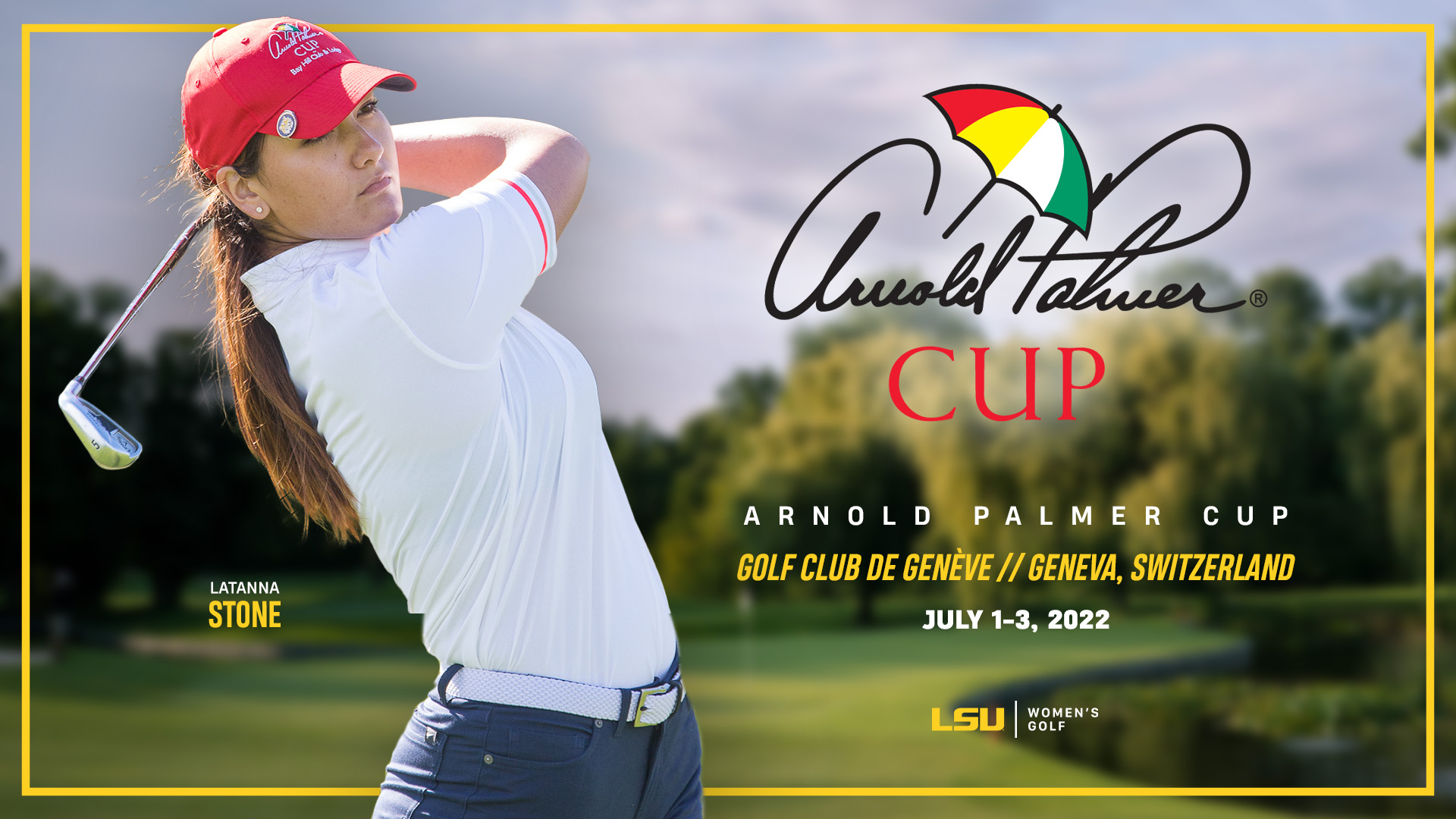 BATON ROUGE – Call LSU’s Latanna Stone one of the veterans of the United States’ team for the 2022 Arnold Palmer Cup, taking place this weekend at the Golf Club de Genève in Switzerland.

Stone, who will be a senior at LSU in the fall, joins Rachel Kuehn as three-time participants in the event and for Stone, the third time will mark her first appearance in the event on foreign soil.

Stone arrived in Switzerland ready to help lead the U.S. to back-to-back victories in the Palmer Cup against an international squad. Unfortunately, according to reports, her golf clubs are somewhere between the United States and Switzerland.

Stone has been able to borrow and piece together a set of clubs and she is set to go when the first round of mixed four-ball begins on Friday in Switzerland, which is seven hours ahead of American central time.

Four-ball is also known as better ball or best ball. Each golfer plays their own ball, the team’s score on each hole is the lower player’s score.

Stone will team with Travis Vick from the University of Texas and they will face Frederik Kjettrup of Denmark, who plays for Florida State and Aline Krauter of Germany, who plays at Stanford. That match will tee at 9 a.m. in Switzerland (2 a.m. in Baton Rouge). Live scoring can be found at Golfstat.com under the Arnold Palmer Cup – Day 1 blue square.

Stone was part of the victorious Team USA squad which won back the Palmer Cup at Rich Harvest Farms outside Chicago, 33-27, in the 60-match affair with Team International in the spring of 2021. She made her first start in the Palmer Cup in the delayed 2020 matches in December of that year in Florida.

Founded in 1922, Golf Club de Genève features a course designed in 1973 by Robert Trent Jones, Sr. and fully renovated by his son Robert Trent Jones, Jr. in 2018. A par 72 that plays to 6,821 yards, the course offers views of the city, Lake Geneva, the iconic Mont Blanc and the surrounding Alps.

Stone has already represented her country this year, helping the American team to a dominate win over Great Britain and Ireland in the Curtis Cup at the prestigious Merion Golf Club in Pennsylvania in June.

In the Saturday morning four-ball matches, Stone went birdie-par on the 16th and 17th hole to get her match with Emilia Migliaccio of the USA back to even and the Americans won a third consecutive hole on the 18th to win the match. In her Curtis Cup singles match, Stone was 2Down coming to the 13th hole. Stone, a Riverview, Florida native then birdied the 13th and 14th holes to get the match to tied. Stone got a third hole on the par four 16th going one up. Her opponent tied the match with a win on the par 3 17th, setting up the drama on the 18th hole. On her second shot at 18, Stone had 150 yards to the pin and hit possibly her best shot of the weekend to tap-in range. The putt was conceded for the birdie and that was the difference, giving Stone the 1-up win. The Curtis Cup rookie finished with a 3-1 record for the USA.

In the SEC Championships in April, Stone helped lead LSU to their first SEC Championship in 31 years, by making key points to swing and clinch matches in the semifinals and finals. She proved to be the winning match in the finals against Florida, 1 up.

In the Palmer Cup, there are 12 men and 12 women playing for both the USA and the International squads. There will be some mixed pairings and some men’s and women’s team play in the first 36 points of the competition on Friday and Saturday. Sunday will conclude with 24 singles matches with the first team to 30.5 points winning the Palmer Cup. This will be the 26th edition of the Cup, with the United States leading, 13-11-1.