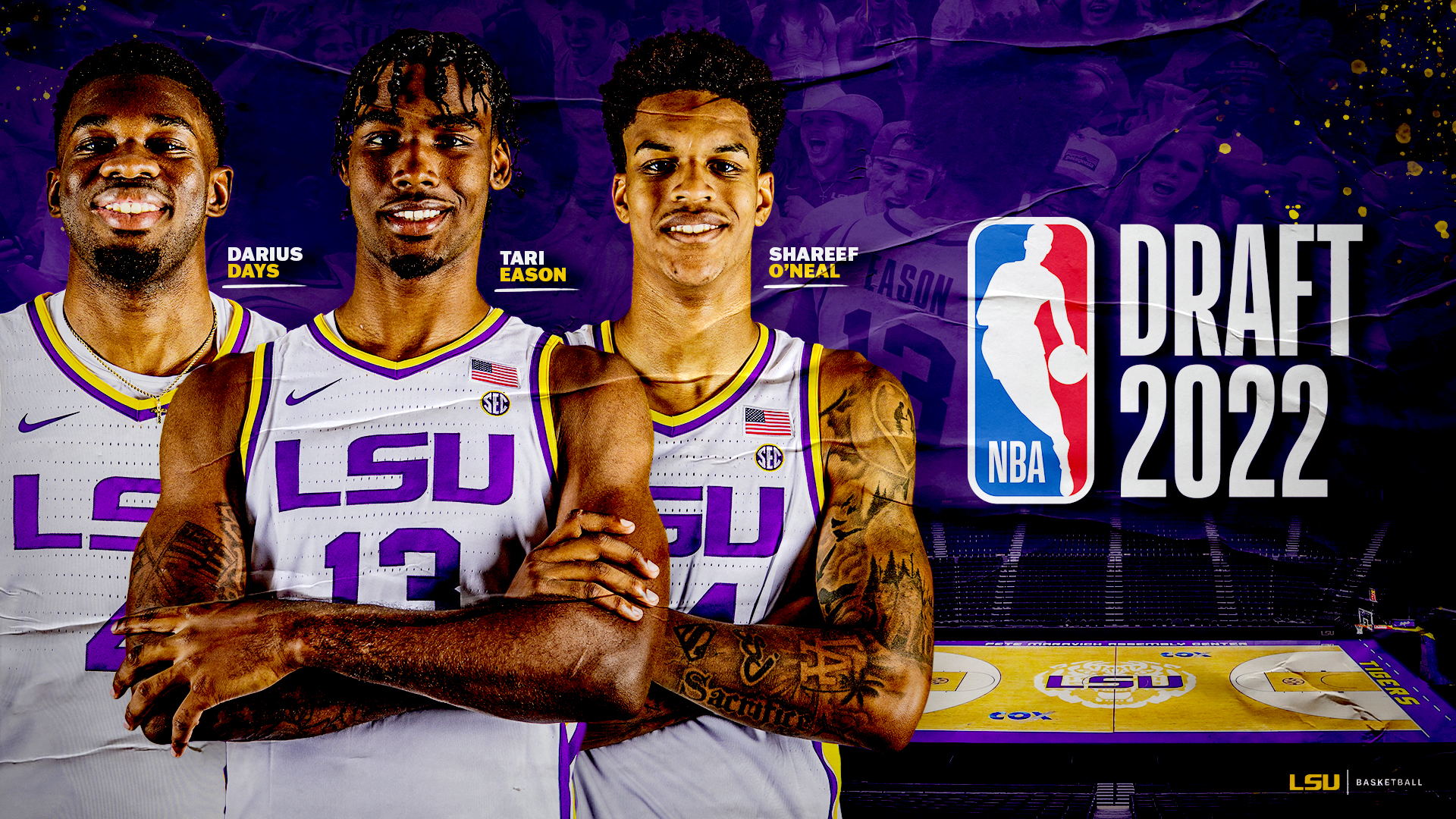 BATON ROUGE – The 2022 NBA Draft is set for Thursday night at the Barclays Center in Brooklyn, New York, and for the second straight draft, an LSU player could have his name called in the first round.

Mock drafts which have been posted in the last few weeks have former LSU player Tari Eason, who was the Southeastern Conference’s Sixth Man of the Year, anywhere from late in the lottery selections to the middle of the first round.

In 2021, Cameron Thomas of LSU, was selected with the 27th pick of the first round by the Brooklyn Nets.

LSU could potentially have NBA draft picks in four consecutive drafts, the first time since a 5-year selection run from 2005-09.

Eason had a breakout 2021-22 season at LSU after transferring from Cincinnati, where he played as a freshman. A first-team All-SEC selection and an AP Honorable Mention All-America selection, Eason averaged 16.9 point, 6.6 rebounds, 1.0 assists, 1.1 blocks and 1.9 steals a game while playing 24.4 minutes per game.

Eason scored in double figures in 29 games for the Tigers with 11 games of 20 points or more and seven double doubles. He was named a semifinalist for the Naismith Defensive Player of the Year award and finished sixth in the SEC in scoring, ninth in rebounds, T4 in steals and ninth in offensive rebound average (2.27).

One writer at the NBA combine noted that Eason’s 7-2 wingspan was, “an excellent trait for a 6-8 forward known for his defensive versatility.”

Also entered in the draft pool from LSU are Darius Days and Shareef O’Neal.

Days played at LSU for four seasons, improving in average each season, averaging 13.7 points, 7.8 rebounds and 1.5 steals a game this past season. He started all but one game of the 92 that LSU played over the last three seasons. In all, he had 26 games in double figures, including 70 for his career with nine double doubles for the season and 25 for his career. He posted 10 career games of 20 points or more.

Days, who attended the G League Combine and then was invited to join the NBA Draft combine, is only the third LSU players since 1977-78 to have 1,300 points, 800 rebounds and 125 steals in his career.

BasketballNews.com said Days, who recorded a 7-0 wingspan in the combine, “has a special combination of power and bounce.”

O’Neal battled injuries during his time at LSU and was away nearly a year off the court before returning as a junior this past January. He played in 14 games and averaged 2.9 points and 2.1 rebounds. He averaged eight points and six rebounds in the G League Elite Camp in May.

Like Eason and Days, O’Neal has worked out for several teams in the days heading to the NBA Draft in hopes of picking up a second-round selection or free agent signing in preparation for the summer leagues which start in early July.

The NBA Draft will be covered live on both ESPN and ABC with ESPN having the complete live coverage of both rounds while ABC will cover the first round. Malika Andrews will host the ESPN coverage beginning at 7 p.m. CT with Jay Bilas, Kendrick Perkins, Adrian Wojnarowski and draft analysts Bobby marks and Mike Schmitz on set. The ABC broadcast will feature Kevin Negandhi as host with Stephen A. Smith, Chiney Ogwumike and Jalen Rose.