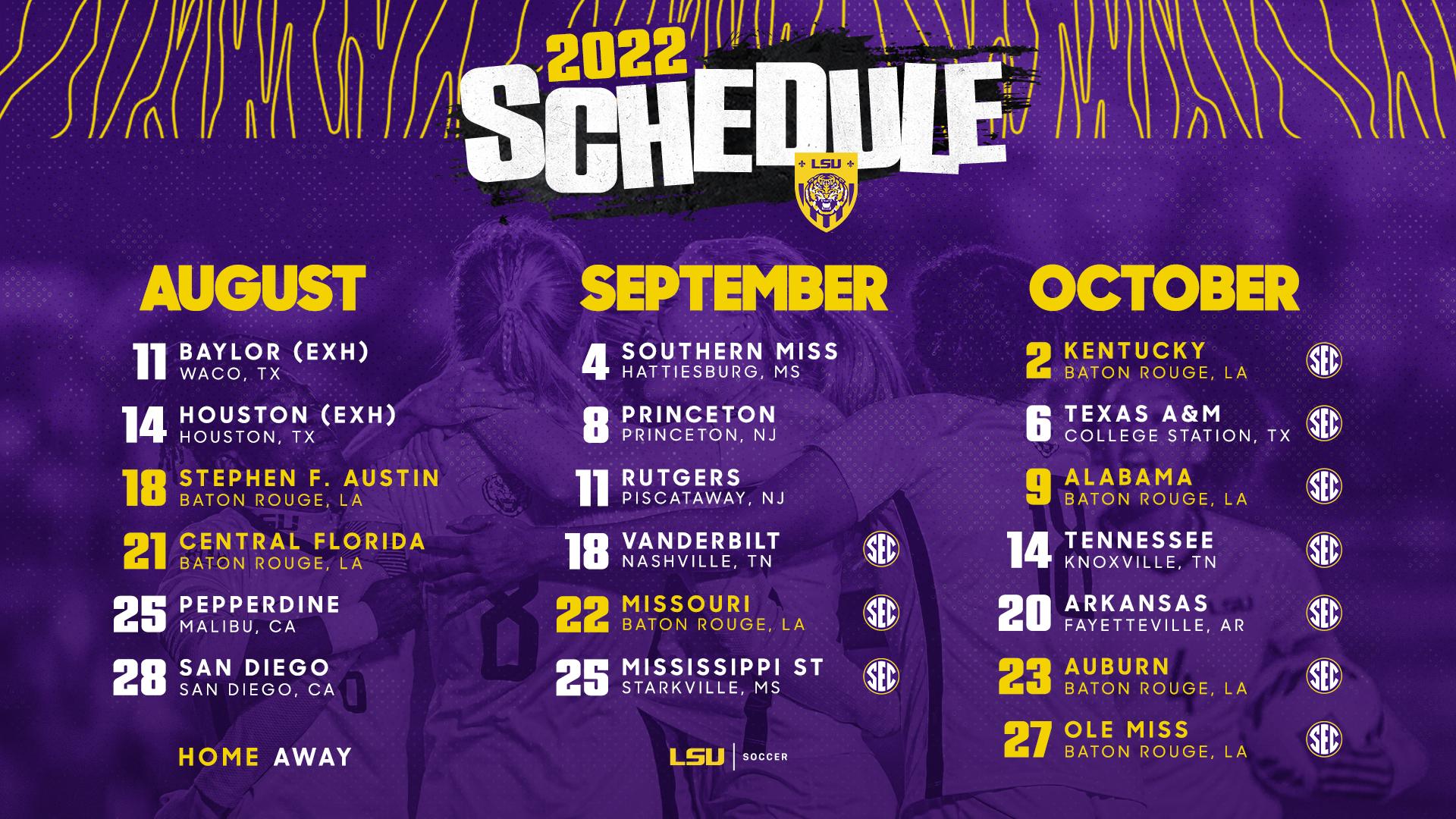 Baton Rouge, La. – The 2022 schedule for the LSU soccer program has officially been released and will feature 17 regular season matches, including seven at the LSU Soccer Complex.

Head coach Sian Hudson will enter her third season at the helm of LSU soccer. After laying the foundation in her first season, Hudson led the Tigers to an 11-8-1 record in a 2021 season that saw the program achieve new highs along the way. The program peaked as high as No. 5 in the national rankings, which was a program record, as well as earned the highest ranked win in program history as they handed then-No. 4 Arkansas its only defeat in the regular season by a score of 4-2 on LSU’s senior night. The Tigers went on to earn a berth in the NCAA Tournament, the seventh time in the program’s history.

The season will begin with two exhibitions on the road as the Tigers travel to the state of Texas to take on Baylor (August 11) and Houston (August 14). The team then returns to Baton Rouge to host its regular season opener as they take on Stephen F. Austin on Thursday, August 18 before hosting South Florida three days later on August 21.

The team’s longest road stretch of the season begins as the Tigers end the month of August in California as they travel to Pepperdine (August 25) and then San Diego (August 28). September opens with a trip to Hattiesburg, Mississippi to take on Southern Mississippi (September 4) before heading to the state of New Jersey to take on Princeton (September 8) and Rutgers (September 11).

SEC play starts in Nashville, Tennessee as LSU visits Vanderbilt on September 18 before ending the month with a home-away weekend as they host Missouri (September 22) before traveling to take on Mississippi State (September 25).

The month of October is the busiest of the season as seven of the 17 regular season matches will be contested. Kentucky (October 2) comes to Baton Rouge to kick it off before the Tigers head back on the road to take on Texas A&M (October 6). The Alabama Crimson Tide come to town (October 9) before a stretch of back-to-back road matches against Tennessee (October 14) and Arkansas (October 20). The regular season will reach its climax in Baton Rouge as Auburn (October 23) and Ole Miss (October 27) visit the LSU Soccer Complex.

The SEC Tournament is slated to begin on Sunday, October 30 in its new home of Pensacola, Florida, with the final scheduled for November 6. The first weekend of the NCAA Tournament will begin the following weekend of November 11-13.