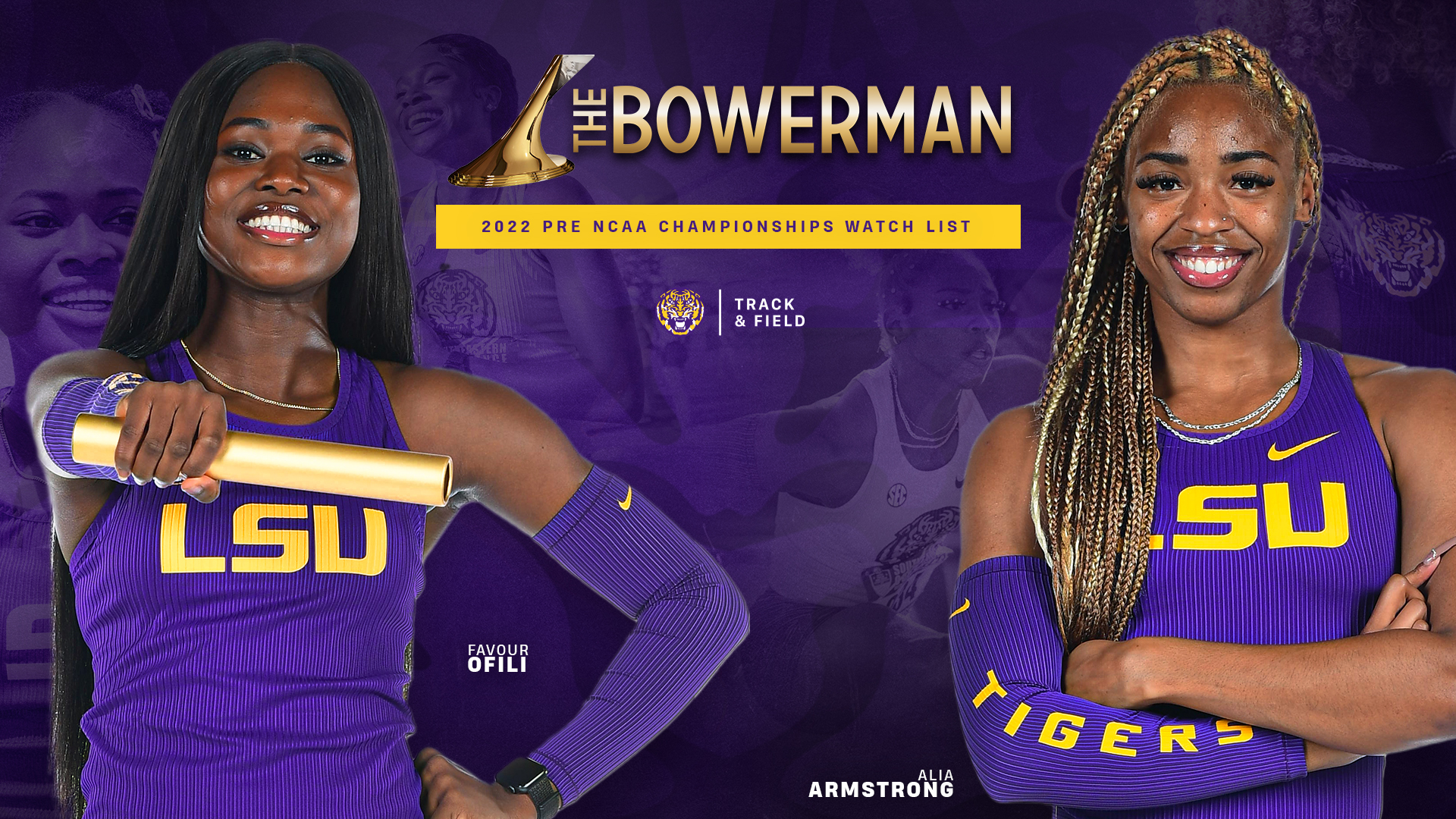 BATON ROUGE, La. — LSU’s Favour Ofili and Alia Armstrong remain as two of the 10 women on The Bowerman Watch List that was released Tuesday, just one day before the NCAA Championships are set to begin.

Ofili and Armstrong both won individual and relay titles at the SEC Championships in mid-May. Ofili completed the sprint triple with wins in the 100 meters (10.93/PR), 200 meters (22.04), and the 4×100 meter relay (42.59). Ofili’s performances resulted in 22.5 points for the Tigers earning her the Commissioner’s Trophy. Armstrong actually handed off to Ofili in the 4×100 meter relay to help LSU win that event, and she won her individual title in the 100-meter hurdles with a readout of 12.46 (+2.1 m/s).

Both Ofili and Armstrong did exactly what they had to do at the NCAA East Preliminaries to qualify for the national meet. Ofili will be a busy bee as she’s set to compete in four events – 100 meters, 200 meters, 4×100 meter relay, and 4×400 meter relay – that will equate to a possible eight races in the span of three days. Armstrong is entered in the 100-meter hurdles and 4×100 meter relay.

Ofili has earned the attention of The Bowerman Committee with her collegiate record-setting time of 21.96 in the200 meters that came at the Tom Jones Memorial in Gainesville, Florida, in the middle of April. Not only is that a collegiate record, but it also made her the fastest 200-meter sprinter in Nigerian history.

Her personal best of 10.93 seconds that she recorded at the SEC Championships was rated as the third fastest in Nigerian history. Both of her times this season, the 10.93 and 21.96, rank inside the top 10 of the world this year. The time of 10.93 also makes her the 10th fastest performer in collegiate history.

Armstrong enters the national meet having won her last three 100-meter hurdle finals races. Her most eye-opening performance of the season came in the outdoor opener as she ran a slightly wind-aided 12.33 in the 100-meter hurdles at the Texas Relays. That time was the fastest ever to be run in collegiate history, regardless of conditions. It doesn’t count as a collegiate record because the wind was just above the allowable helping wind of 2.0 meters per second. Her career-best wind-legal time of 12.61 occurred at the Tom Jones Memorial in mid-April with a clocking of 12.61 to rank just outside the collegiate all-time top-10 list.