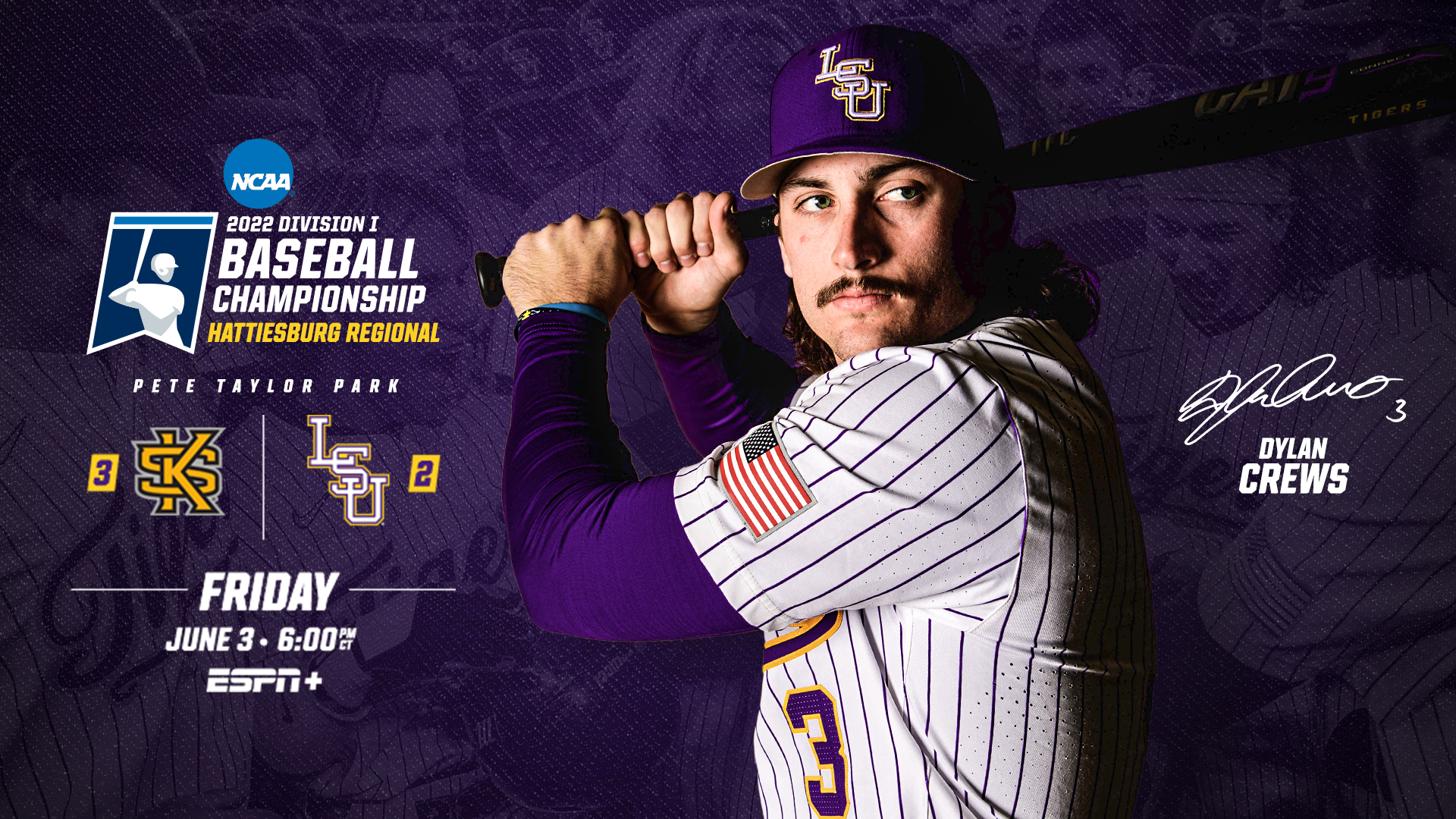 SERIES HISTORY VS. KENNESAW STATE
• Friday’s game marks the first baseball meeting between LSU and Kennesaw State … the Tigers are 15-10 all-time against teams currently in the Atlantic Sun Conference – LSU is 3-0 vs. Jacksonville State, 1-0 vs. Bellarmine, 2-1 vs. North Florida, 2-1 vs. Eastern Kentucky, 5-4 vs. Stetson, 1-2 vs. Lipscomb and 1-2 vs. Jacksonville.

QUOTING COACH JAY JOHNSON
“The success we had in the SEC this season should give our team great confidence. We swept the defending national champion (Mississippi State) on the road, we swept the national runners-up (Vanderbilt) on the road. We won two out of three at Florida, which has been one of the premium programs in college baseball for the last 13, 14 years. If that doesn’t give our team confidence, I don’t know what will. This week will be all about being in the right frame of mind and playing good baseball. I’m just really excited for this team, to be going to the NCAA Tournament, to have a 38-win regular season while going through a lot of adversity. To do all of that and to play the road schedule that we did, I think it’s a great accomplishment, and it should give our team a lot of confidence going forward. Right now, all that matters is going forward.”

ABOUT THE TIGERS
• LSU has won five of its last seven games … the Tigers closed the regular-season on a four-game win streak and defeated Kentucky in their first game of the SEC Tournament before suffering consecutive losses to Tennessee and Kentucky … LSU finished the regular-season with an SEC series sweep at Vanderbilt, marking LSU’s first-ever three-game sweep in Nashville and the Tigers’ first series victory at VU since 2005 … LSU scored 42 runs in the Vanderbilt series, marking its highest runs total ever in an SEC road series and its second-highest total in an SEC series overall … the Tigers batted .357 (41-for-115) in the series with nine 2B, one 3B and 11 HR.

• LSU, which finished 17-13 in the SEC, was the No. 4 seed in the SEC Tournament, and the Tigers were among the Top 4 SEC Tournament seeds for the first time since 2017, when they were No. 1 … LSU is 7-3 this season in one run-games, including a 5-2 mark in SEC one-run games … the Tigers have 107 homers this year, marking LSU’s highest HR total since the 2009 team blasted 107 dingers … LSU was 10-5 this season in SEC road games, and the Tigers posted road series wins at Vanderbilt, at Florida, at Alabama and at Mississippi State.

• Centerfielder Dylan Crews was named by the league coaches as the 2022 SEC Co-Player of the Year, becoming LSU’s first SEC Player of the Year since outfielder Raph Rhymes received the honor in 2012 … former LSU right-hander Aaron Nola was named SEC Pitcher of the Year in 2013 and in 2014 … Crews is also a Golden Spikes Award semifinalist and a Collegiate Baseball First-Team All-American.

• Third baseman Jacob Berry was voted a second-team All-American by Collegiate Baseball and he was named second-team All-SEC by the league coaches … he is hitting a team-high .381 (72-for-189) on the year, including a remarkable .400 in SEC games, an average that leads the league in conference games only … Berry is also a Golden Spikes Award semifinalist.

• Senior RHP Ma’Khail Hilliard has won 14 of his last 15 career decisions … he won 12 consecutive career decisions before suffering a loss on May 13 vs. Ole Miss … Hilliard’s last loss prior to the Ole Miss game on May 13 occurred on May 22, 2019, to Mississippi State in the SEC Tournament … LSU is 9-2 this season in the 11 games Hilliard started against SEC opponents.

ABOUT THE OWLS
• Kennesaw State is 35-26 overall and the Owls finished 19-11 in the Atlantic Sun Conference … KSU received an automatic bid to the NCAA Tournament by winning the A-Sun Tournament title with a 10-6 victory over Liberty.
• The Owls are batting .301 as a team with 121 doubles, 11 triples, 67 homers and 49 steals in 64 attempts … the KSU pitching staff has a 6.08 cumulative ERA, and the Owls are allowing a .269 opponent batting average.
• Outfielder Josh Hatcher is batting .386 with 25 doubles, three triples, 13 homers and 55 RBI … infielder Donovan Cash is batting .356 with 20 doubles, 10 homers and 57 RBI … infielder Cash Young has team-highs of 17 homers and 58 RBI. 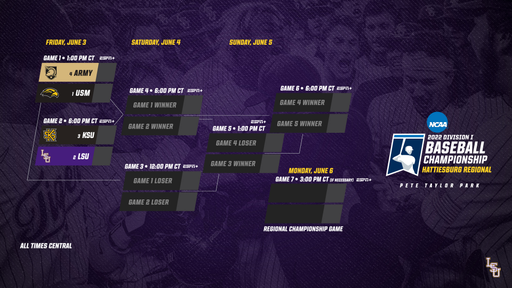