Alden Wallace reacts as her eagle putt at the par 5 7th hole drops as part of her 1-over round of 73. 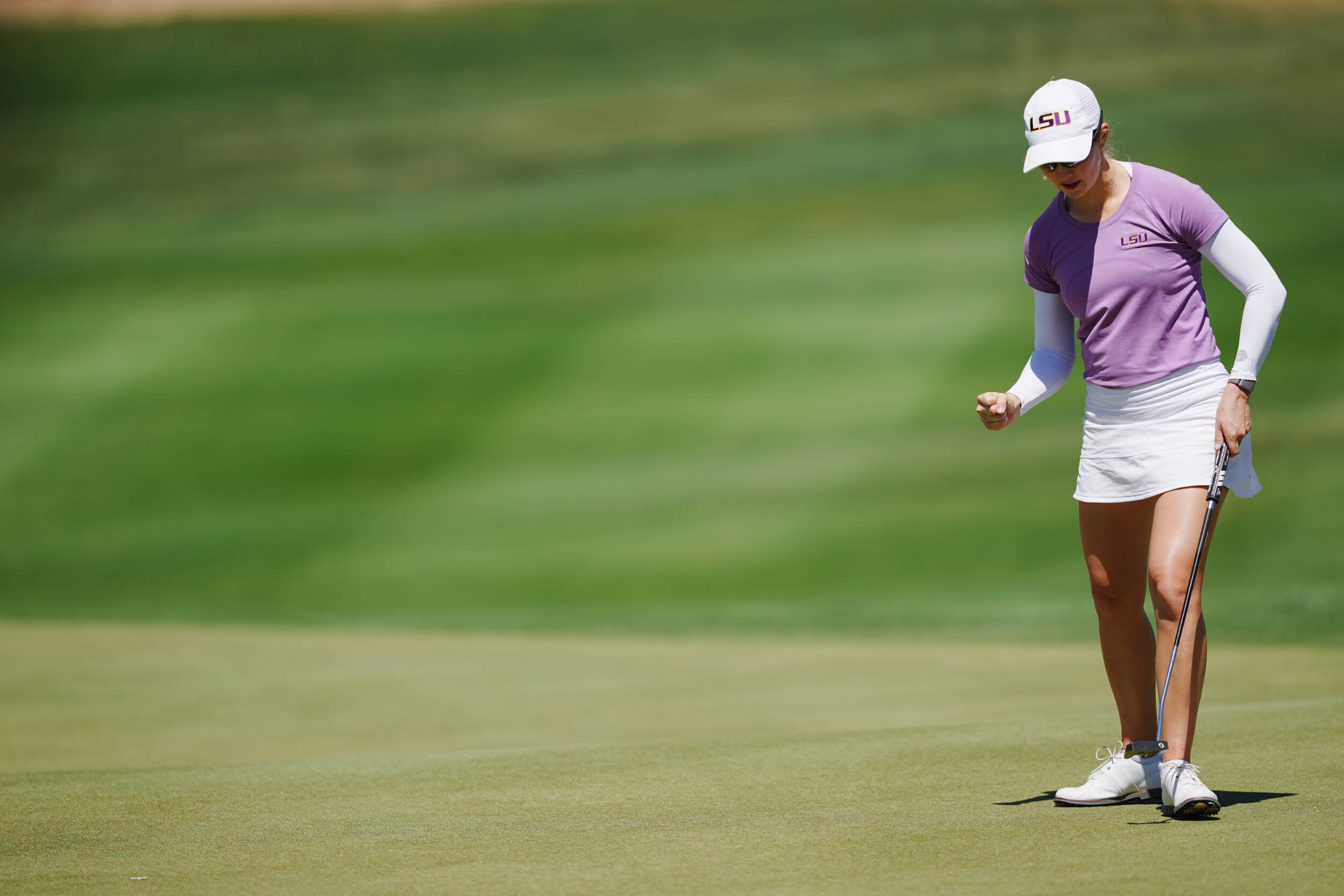 Also, having to make a late change in the starting lineup didn’t prove to be bad either.

When the final shot had been struck around 6:45 p.m. at Grayhawk Golf Course in the first round of the NCAA Division I Women’s Golf Championships, the Tigers found themselves sitting in a strong tie for fourth place after an 8-over round of 296 over the par 72, 6,340-yard layout.

Not even a post-round penalty shot assessed for a slow play violation apparently late in the round could stop the assessment that it was a pretty good day for the Tigers that they hope to carry through to round two on Saturday afternoon in the desert.

No. 1 seed Stanford is the first-round leader at 1-over 289 with Texas A&M in second at 4-over par 292. UCLA is third at 7-over 295 and LSU, Florida State and Auburn at 8-over 296 in fifth. Alabama is in a tie for seventh and Mississippi State in 10th give the Southeastern Conference five teams in the top 10 after one round.

The league had a record nine teams qualify for the championships this year through the six regionals.

“The old cliché is you can’t win it in the first round, but you can play yourself out of it,” said LSU Coach Garrett Runion. “I think they are in a good position, all things considered. We had a lot of adversity (Friday) with the substitution, the slow play penalty. I think our ladies handled it well and we’ll be ready to go (Saturday).”

The first tee times each day are at 6:30 a.m. PT so for LSU it meant leaving early, getting breakfast and then having approximately one hour to hit the range and the putting green before the players rounds began. LSU and 11 other teams have the morning-afternoon first two rounds based on rankings, with the other 12 teams having the late-early sequence.

As it turns out, it was an even split with five morning wave teams in the top 10 in the first-round standings.

Senior Jess Bailey unfortunately was under the weather and was unable to go in Friday’s first round and recent rule changes have allowed substitutions to the playing five even after lineups are submitted.

“This morning when we woke up and Latanna (Stone) and Jess (Bailey) were not feeling very well,” said Coach Runion. “Latanna said she could fight it out which I figured she would. Jess wasn’t feeling good. I said I’ll leave it up to you and she did a mature senior thing and said it would be better for the team if Alden (Wallace) played. So, I ran over an hour before we started and told Alden she was in and she didn’t even break stride. She said ‘yes sir’ and went off and played an unbelievable round. It was her first round of the spring and it is in the national championship. She loves the big stage.”

Wallace, a native of Shreveport and also a senior, went out and posted a 1-over 73 on the opening day, ironically the same score she posted a year ago in the opening round when she was part of the lineup. Twice, she was 3-over in the round, the latest after 10 holes when she bogeyed the first (LSU started on hole 10).

But on the par 5, 474-yard seventh hole (her 16th of the round), Wallace hit a 4-iron from 223 close and made the putt for eagle to get back to 1-over. She parred the final two holes coming home to post and stand in a group tied for 18th.

“She drove the ball well,” Runion said. “That eagle on seven really made it a good way to finish. I felt completely comfortable that she could handle the stage, hit the shots and she knew the course.”

The course played difficult at times for most of the field of 132 with only five players under par. The greens proved to be quick, firm and dangerous for shots that weren’t on the right plateau. It will be interesting to see future round pin placements and how much water they put on the greens that by the end of the morning round were beginning to drive out and show a few brown spots.

Runion said Stone would fight through any illness and she did, also posting a 1-over 73. Stone posted two double bogeys, one on her first hole (No. 10) that also had her at 3-over par, but three birdies coming home got her back to a score that also has her tied for 18th.

ANNIKA Award and national Women’s Golf Coaches Association player of the year candidate Ingrid Lindblad of LSU had a steady day with 15 pars, grazing the edge on several birdie putts. She finished with a 2-over 74 and is in a group tied for 28th heading to Saturday.

Carla Tejedo posted the final counting score for LSU with a 4-over par 76 on the day.

The individual leader is Rose Zhang of Stanford at 4-under par 68, one shot better than Zoe Slaughter of Texas A&M at 3-under 69.

The final scoring average for the first round, which was 76.22 after the morning 60 players, finished the day at 76.13 when the final putt was struck 12 hours plus after the round started.

LSU will play with UCLA and Baylor again in the second round and the wave with the three teams will go off beginning at 11:41 a.m. PT (1:41 p.m. in Baton Rouge). The first cut comes after the third round on Sunday, when the field is reduced from 24 teams to 15 teams.

LSU will announce its lineup when it reaches the course on Saturday.

After the opening round, 13-over-par is the number in 15th place. The bottom of the field is only seven shots away from that spot, so a lot of things are still to be determined in this event.

Live scoring for the second round can be found at Golfstat.com by tapping the NCAA Women’s D1 Women’s Championship box. Updates will be provided during the round on the @LSUWomensGolf Twitter account.