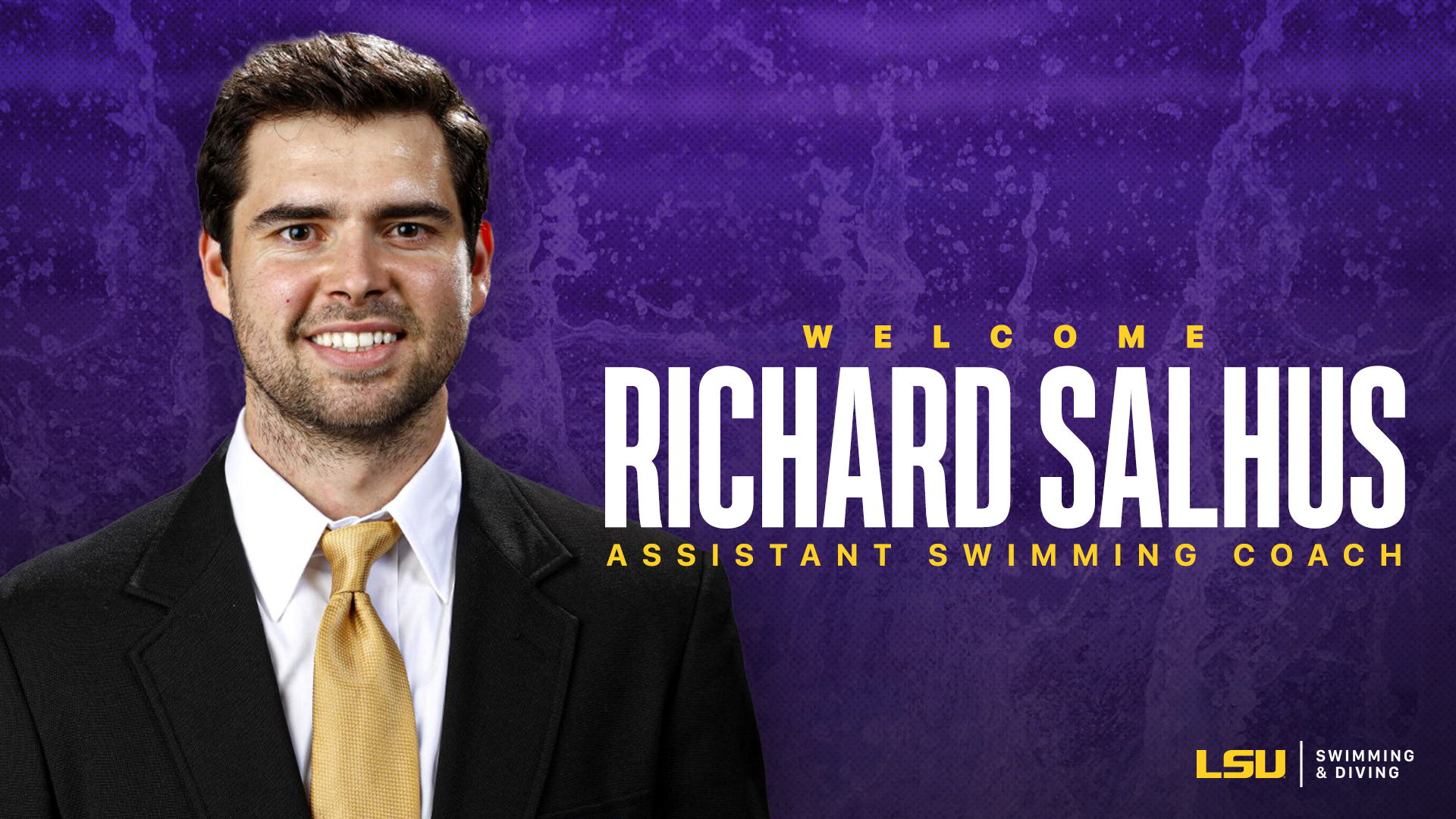 “We are excited to have Rich join the LSU Swimming staff,” Bishop said. “Rich’s experience working with Iowa and Army West Point as a great recruiter will enhance our global reach and help us to continue to draw the best student-athletes from around the globe to LSU. As a coach on deck, Rich worked with NCAA qualifiers at Iowa and conference finalists at Army. His breadth and depth of coaching from developmental Age Group coaching to NCAA & International level swimmers will add great strength to our coaching staff.”

“I’d like to express my gratitude to Rick Bishop and the administration for providing me with the great opportunity to join the LSU program,” Salhus said. “I’ve always admired Coach Bishop and the academic, athletic, and Olympic accomplishments of the LSU student-athletes. My family and I are thrilled to be moving to Baton Rouge, and I am looking forward to working with the student-athletes and continuing the LSU swimming and diving legacy. Geaux Tigers!”

Salhus joins the Tigers coaching staff after spending three seasons with the United States Military Academy at West Point. During his time at Army, Salhus coached the middle distance and distance swimmers. He directly coached the Patriot League Champion in the 1650-free, which broke the school’s record by 10 seconds.

In his stint with the Black Knights, the team captured a total of 17 Patriot League Champions, while breaking 12 school records. Salhus saw five athletes receive All-Conference accolades and six swimmers clock NCAA ‘B’ standard qualifying times. In addition to the accomplishments in the pool, the women’s team recorded the highest team GPA in program history during the fall of 2020.

Before arriving in New York, Salhus spent time at the University of Iowa, his alma mater, heading the recruiting for the men’s team and international athletes. While given the reins of the recruiting department, Salhus also supervised other needs for the program such as meet entries, roster management, scheduling and programming practices.

Salhus helped coach the Hawkeyes to nine individual NCAA qualifiers and two relay teams who met the NCAA ‘A’ standard for nationals. In his three years there, he saw 30 school records fall and over 120 changes to Iowa’s All-Time Top-10 lists.

The Iowa student-athletes under Salhus’ guidance achieved greatness in the classroom on top of the success they saw in the pool. The Hawkeye women’s team was named CSCAA Scholar All America Team during each of his three seasons and in 2019, Ben Colin became the first Hawkeye to receive the NCAA Jim McKay Scholarship. ​​Annually, one male and one female are recognized with the McKay scholarship for outstanding academic achievement and their potential to make a significant contribution to the sports communication industry or public relations.

During his first season in Iowa City, the Hawkeyes tallied a top-26 finish at the NCAA Women’s Swimming & Diving Championships. Fueled by first-team All-America performances from breaststroker Emma Sougstad and platform diver Calli Head, Iowa accumulated 26 team points to post its highest finish since 2005. The Hawkeyes went a combined 13-5 in dual competition — 7-2 for the women, 6-3 for the men — with a roster comprised of underclassmen. Iowa had 56 automatic or provisional NCAA qualifying standards during the season.

Before returning to his alma mater, Salhus helped the Iowa Flyers Swim Club achieve a number of accolades during his tenure. He coached three 2016 Olympic Trials qualifiers, including a fourth-place place finisher in the 200-fly and was named National Junior Team Coach in 2016-2017.

Salhus competed for Jon Rudd under Plymouth Leander in the United Kingdom where he held various records in Devon County. He went on to win silver in the 17/18-year-old 50 free and bronze in the 800-free relay at the British Youth Championships and he also competed in the Great Britain Open Championships, where he was a finalist in the men’s 50-fly and semifinalist in men’s 50-free.

The Johannesburg, South Africa, native was a four-year Iowa letter winner, competing from 2007-11. He earned Big Ten Swimmer of the Week honors in 2008. He graduated from the University of Iowa in 2011 with a bachelor’s degree in health science with a minor in health and sports studies.

He and his wife, Mary, have two sons, Liam and Oliver.