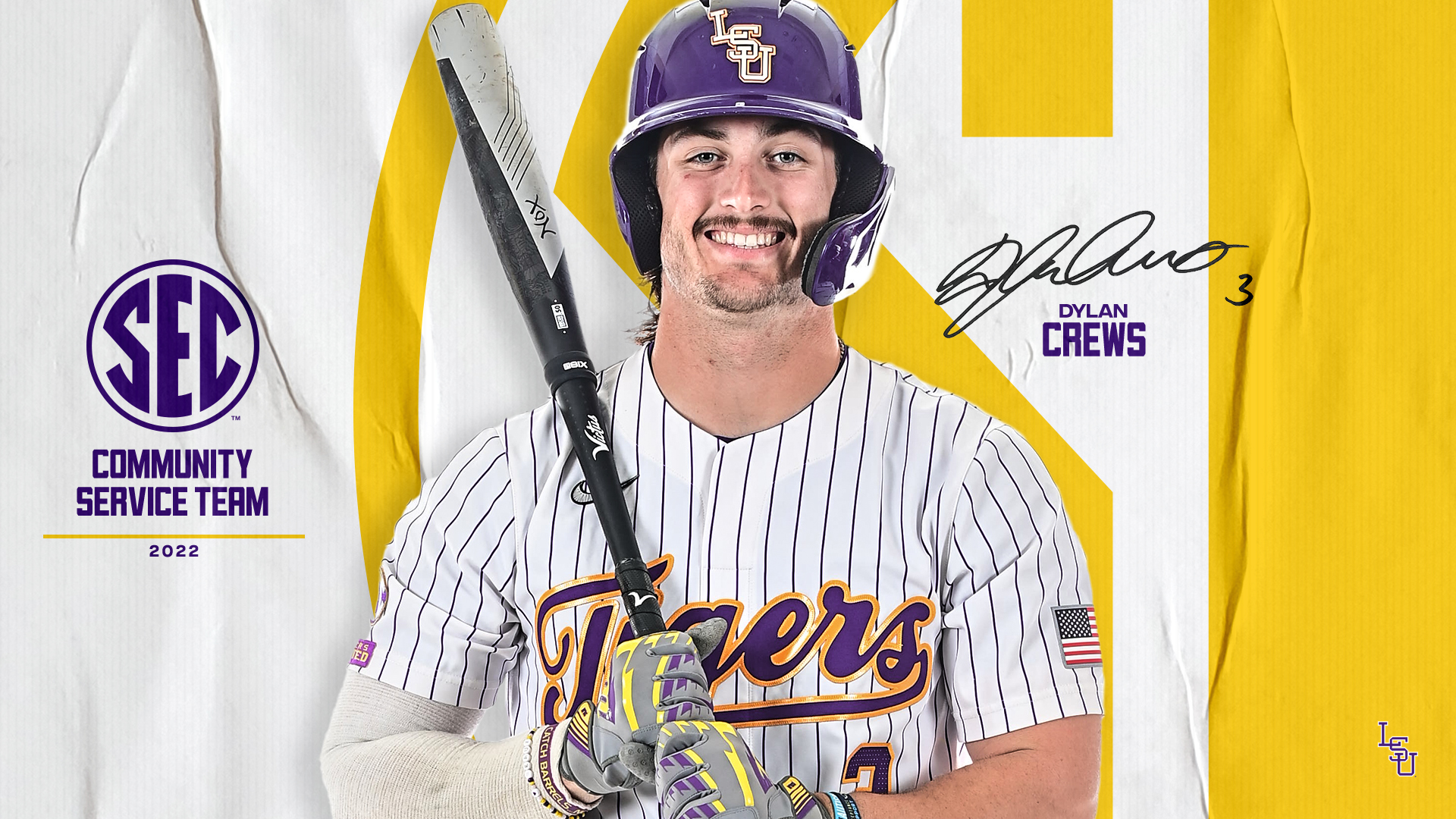 BIRMINGHAM, Ala. (May 18, 2022)—– In a continuing effort to recognize the accomplishments of student-athletes beyond the field of competition, the Southeastern Conference has highlighted a Community Service Team for baseball for the 2022 season. The conference names a Community Service Team for each of its 21 league-sponsored sports, looking to highlight an athlete from each school who gives back to his community through superior service efforts.

Dylan Crews works with Families Helping Families of Greater Baton Rouge, a non-profit resource center organized and directed by family members of individuals with disabilities; the organization supports families whose members have physical, cognitive, mental, emotional, or behavioral disabilities. Crews is involved with Team of Dreams in Gonzales, La., which is an all-Abilities baseball league serving the youth and young adults who use wheelchairs, persons with physical disabilities, or persons with intellectual disabilities. Crews and his family purchase four seats for every home LSU Baseball game and give the tickets to families with special needs children. He signs autographs and takes pictures with the kids in right field before every home game. One of the children that Crews has befriended is eight-year-old Aubrey White, who has non-verbal autism and suffers from seizures. The first time her parents ever heard Aubrey speak was while they were watching an LSU baseball game on TV last year. When Crews stepped up to the plate, Aubrey cheered, “Dylan Crews!” After meeting Aubrey, Crews wanted more kids with special needs to have the opportunity to come to a baseball game, so he and his family began purchasing the tickets for the kids and their families.

Diodati accumulated 100-plus hours of community service during his time at Alabama, making a consistent effort to involve himself in multiple volunteer opportunities. Diodati spent a significant amount of time working with The Miracle League of Tuscaloosa, helping children with mental and physical disabilities experience the game of baseball. He also volunteered with Tuscaloosa’s Arts’n Autism while also taking time to read to students as part of the Alberta Head Start program. He participated in various programs through Alabama Athletics, including multiple Halloween Extravaganzas and Thank-A-Thons in addition to UA’s Dance Marathon. Diodati has also taken part in multiple volunteer opportunities with UA’s Student-Athlete Advisory Committee. In addition to his work in the Tuscaloosa community, he has volunteered 20-plus hours working with youth baseball programs back in Canada

Webb has been actively involved in the Fayetteville community during his time as a Razorback. For the second year in a row, he has worked with Team Impact in support of Arkansas’ annual Childhood Cancer Awareness game. He was named to the 2022 CoSIDA Academic All‐District Team (District 6) and currently boasts a 4.0 GPA while pursuing his master’s degree in operations management. Webb graduated from the University of Arkansas with his bachelor’s degree in finance.

Farquhar epitomizes what it means to be an Auburn baseball student-athlete, both on and off the field. Well-respected by his coaches and teammates, Farquhar was named one of four Legacy Leaders on the 2022 team and leads by example in all aspects of being a student-athlete. In the classroom, he earned his bachelor’s degree in finance with a 3.3 GPA in May and is a two-time member of the SEC Academic Honor Roll. In the community, his service efforts have included stuffing backpacks and making food boxes for people in need while also working numerous camps for little kids, both during and prior to his time at Auburn. He generously gives his time engaging with fans of all ages by taking pictures and signing autographs.

While serving as Florida’s starting shortstop, Josh Rivera has served as leader both on and off the field. His community service involvement features 20.5 hours of contributions to the local community in the spring semester alone. Rivera has volunteered at Lake Forest Elementary with the Lunch Buddies Mentor Program, serving as a role model for the youth of Gainesville. He also assisted with various deliveries to seven different local schools as part of the Gators Tracks program, which provides shoes for children in the Gainesville community. Additionally, Rivera has been involved with the Bread of the Mighty Food Bank and with card preparation at Shands Hospital.

Tate tallied 40 hours of teaching sports/reading to students in area schools including those with special needs in Oconee County as part of adaptive physical education. His past service includes participating in VSCancer program to raise awareness for children/pediatric cancer, and he helped in Special Olympics baseball games, Food2Kids Snack Drives and the #DawgsToThePolls voter education series.

Hazelwood has been active in the community and served as a student teacher at a local elementary school during Fall 2021, completing his work in December. He graduated in December with a degree in Elementary Education and is working on his graduate certificate in Positive Youth Development.

A fixture in the Lafayette-Oxford-University community, Elko has volunteered with Ole Miss’ Adopt-A-Basket program, donating Thanksgiving baskets to families in need around the area. Elko also spent time virtually visiting with youth patients at Le Bonheur Children’s Hospital in Memphis, Tennessee. The Rebel captain also surprised classrooms in the area both with virtual reading sessions and recording reading videos for the university’s Reading with the Rebels program. Elko helped assemble over 500 backpacks filled with non-perishable food items for the Feed the Sip initiative. Elko was a key fixture in A Night to Shine, celebrating local guests with special needs at an unforgettable prom nights. A member of the Student-Athlete Advisory Committee, Elko participated in the Unified Egg Bowl, cheering on Ole Miss’ Special Olympics team in the annual event against the competing team from Mississippi State.

Yeager has been active in the community since arriving in Starkville as a graduate transfer in the fall of 2021. The Lynn Haven, Florida, native has participated in the annual Salvation Army Red Kettle program and spent time volunteering with the Miracle League, which assists children with disabilities play the game of baseball. He received his bachelor’s degree from Mercer in business and has posted a 4.00 GPA while pursuing his master’s in Workforce Education Leadership at Mississippi State.

A local product of Jefferson City, Mo., Austin has been a consistent fixture in the Mid-Mo community. Austin worked extensively with the Brighter Thailand Foundation, an organization founded by students at the University of Missouri dedicated to developing leadership in Thai youth, advancing cross-cultural understanding, and inspiring youth to dream big. Additionally, he served as a volunteer with the Downtown Optimist Club in Columbia and worked with Special Olympics Missouri in a variety of sport programs.

Coyne is a fifth-year senior and a two-time selection to the SEC Spring Honor Roll. He has helped with the Ray Tanner Run, which takes place every fall in Columbia and has been involved with the Screaming Eagles Baseball Team’s game at Founders Park in the fall. Coyne graduated from the University of South Carolina in May with a degree in sport and entertainment management.

Connell excelled in his junior year at Tennessee making a difference in the community. Not only did his work serve the people of Knoxville, the reach of his service extended globally as he went on a week-long service trip to Belize over the summer. In the summer immersion experience in Belize, Connell served alongside the Hearts of Christ Children’s Ministry and the YMCA of Belize to strengthen the local community and form bonds through sport. Locally, Connell’s spent time volunteering with Big Brothers Big Sisters.

Barker earned $5,000 post-graduate scholarship as an SEC Brad Davis Community Service Award winner. He serves as the baseball representative on the Student-Athlete Advisory Committee. In his role, he advocates on behalf of the Aggie baseball team to better the student-athlete experience and assisted in canned food drives. Barker has helped serve in other events such as the Aggie Paint-A-Thon where he aided in painting and landscaping the house of a local citizen in College Station, as well as Traditions Night which included organizing small groups to travel across campus to familiarize incoming student-athletes with campus and the Texas A&M traditions. Barker also participated in the Captain Beggs House Renovation where he managed small teams in packaging belongings and assisted moving furniture for a former student who was physically unable. The Boerne, Texas, native has been an active leader in Fellowship of Christian Athletes totaling over 120 hours of service in two years. In his leadership role, he helped organize an annual kickball event where he engaged with local youth baseball leagues to motivate and encourage children through playing kickball. Barker also organized and led weekly Bible study with the baseball team, encouraged youth athletes at local events and supported weekly FCA meetings three hours per week.

Anderson has made an immediate impact in the community. The right-handed pitcher has dedicated time to numerous causes, including serving as a volunteer with Nashville non-profit Last Minute Toy Store. The organization provides parents the opportunity to select gifts for their children during the holiday season. There, Anderson assisted in a variety of roles, including aiding shoppers in selecting gifts for their children and maintaining inventory and presentation of items.