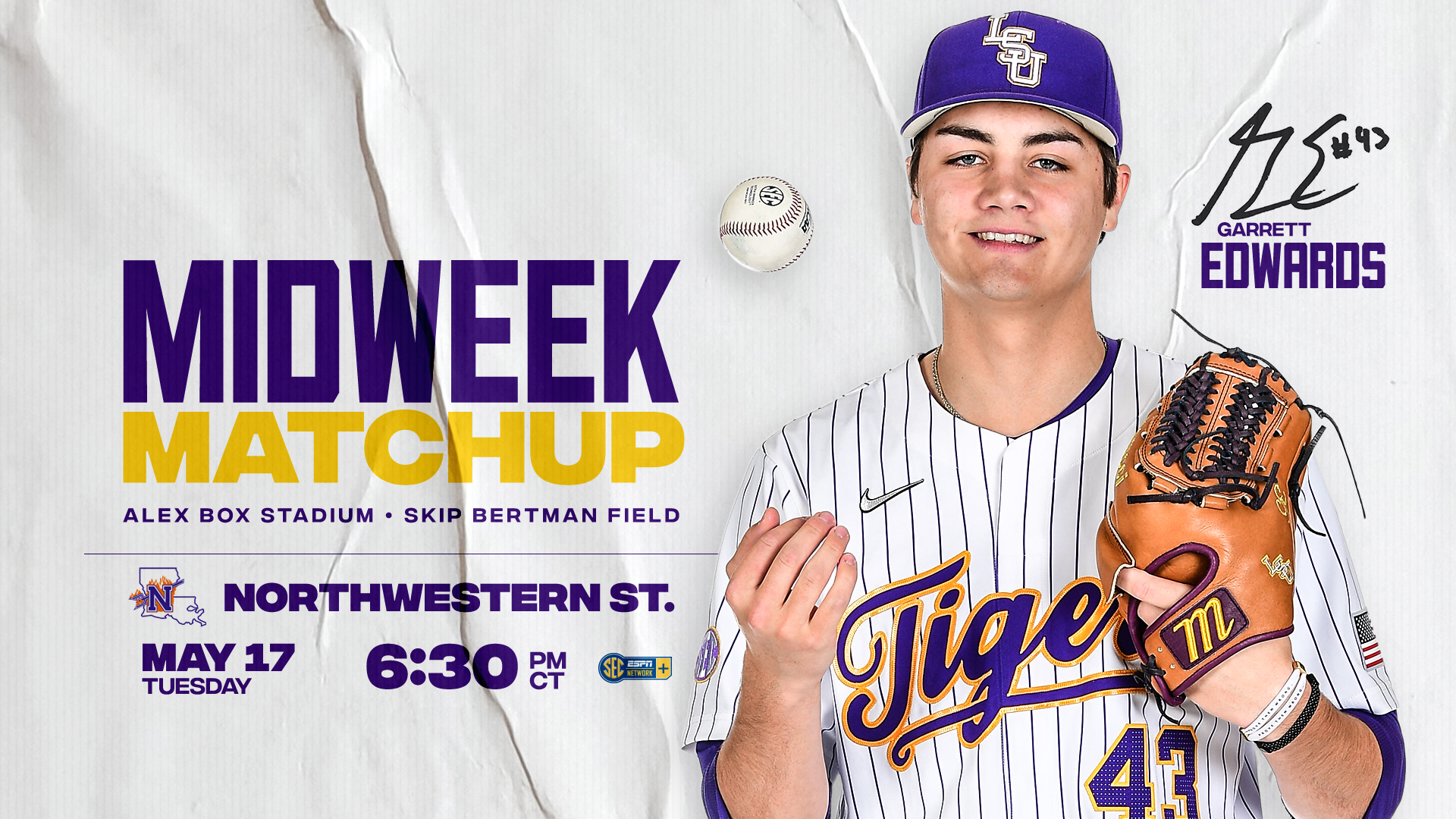 QUOTING COACH JAY JOHNSON
“We are in the process of developing a program of competitiveness and character, and that process continues this week. We want to win games, we want to compete and we want to improve. We’re trying to develop toughness in our program and continue working toward the goal of winning a national championship. It’s important to get on the field Tuesday, compete and play better than we did last weekend.”

ABOUT THE TIGERS
• LSU dropped an SEC series to Ole Miss last weekend; however the Tigers have still won three of their past four league series … the Tigers play host to Northwestern State at 6:30 p.m. CT Tuesday, and LSU begins Week 10 of SEC action when it meets Vanderbilt in Nashville at 7 p.m. CT Thursday.
• LSU, which is 14-13 in the SEC, is in fourth place in the Western Division, and if the season ended today, the Tigers would be either the No. 5, No. 6 or No. 7 seed in the SEC Tournament, pending tie-breakers … the final seeds and pairings for the SEC Tournament will be announced after the regular season concludes on Saturday … LSU is 7-3 this season in one run-games, including a 5-2 mark in SEC one-run games.
• Leftfielder Gavin Dugas was LSU’s leading hitter in four games last week, batting .417 (5-for-12) with one double, one homer, three RBI and four runs scored … first baseman Tre’ Morgan batted .389 (7-for-18) last week with one double, one homer, six RBI and two runs scored … catcher Tyler McManus batted .385 (5-for-13) last week with one double, one homer, three RBI and three runs scored.
• LSU is near the top of the SEC in several offensive categories, including slugging percentage (No. 2 – .513); on-base percentage (No. 2 – .400); total bases (No. 2 – 893); runs scored (No. 2 – 395); RBI (No. 2 – 374); home runs (No. 3 – 92); batting average (No. 3 – .287); doubles (No. 3 – 99) and base hits (No. 5 – 500) … LSU’s batters have been hit by a pitch 97 times through 51 games of the regular season.
• The Tigers are No. 5 in the nation and No. 1 in the SEC in batters hit-by-pitches, and the next-closest SEC team in that category is Missouri with 79 HBPs.
• Sophomore right-hander Ty Floyd delivered an excellent relief outing in Game 1 of the Ole Miss series, limiting the Rebels to one run on two hits in six innings with two walks and three strikeouts … the effort marked his second straight outstanding performance in SEC play, as on May 7 he limited Alabama to one run on two hits in four innings with one walk and five strikeouts.
• Sophomore right-hander Blake Money recorded eight strikeouts in 4.2 innings over two relief appearances last week, allowing one earned run and no walks.
• The LSU pitching staff is near the top of the SEC in a number of categories, including team ERA (No. 4 – 3.91); opponent batting average (No. 4 – .232); fewest earned runs allowed (No. 4 – 196); fewest hits allowed (No. 4 – 399); and fewest walks allowed (No. 4 – 176).

ABOUT THE DEMONS
• Northwestern State is hitting .248 as a team this season with 74 doubles, seven triples, 48 homers and 34 steals in 48 attempts … the Demons’ pitching staff has a 5.02 team ERA and is limiting opponents to a .256 cumulative batting average.
• The Demons completed their Southland Conference regular-season schedule with a 12-12 league mark … Northwestern State plays in the opening round of the Southland Conference Tournament at 1 p.m. CT Thursday when the fifth-seeded Demons meet No. 4 seed Nicholls in Lake Charles, La.
• Catcher Bo Willis has 11 homers and 45 RBI for the Demons, leading the squad in both categories … outfielder Jeffrey Elkins also has 11 home runs, and he is second on the club with 33 RBI … outfielder Larson Fontenot has 12 steals in 13 attempts on the year.