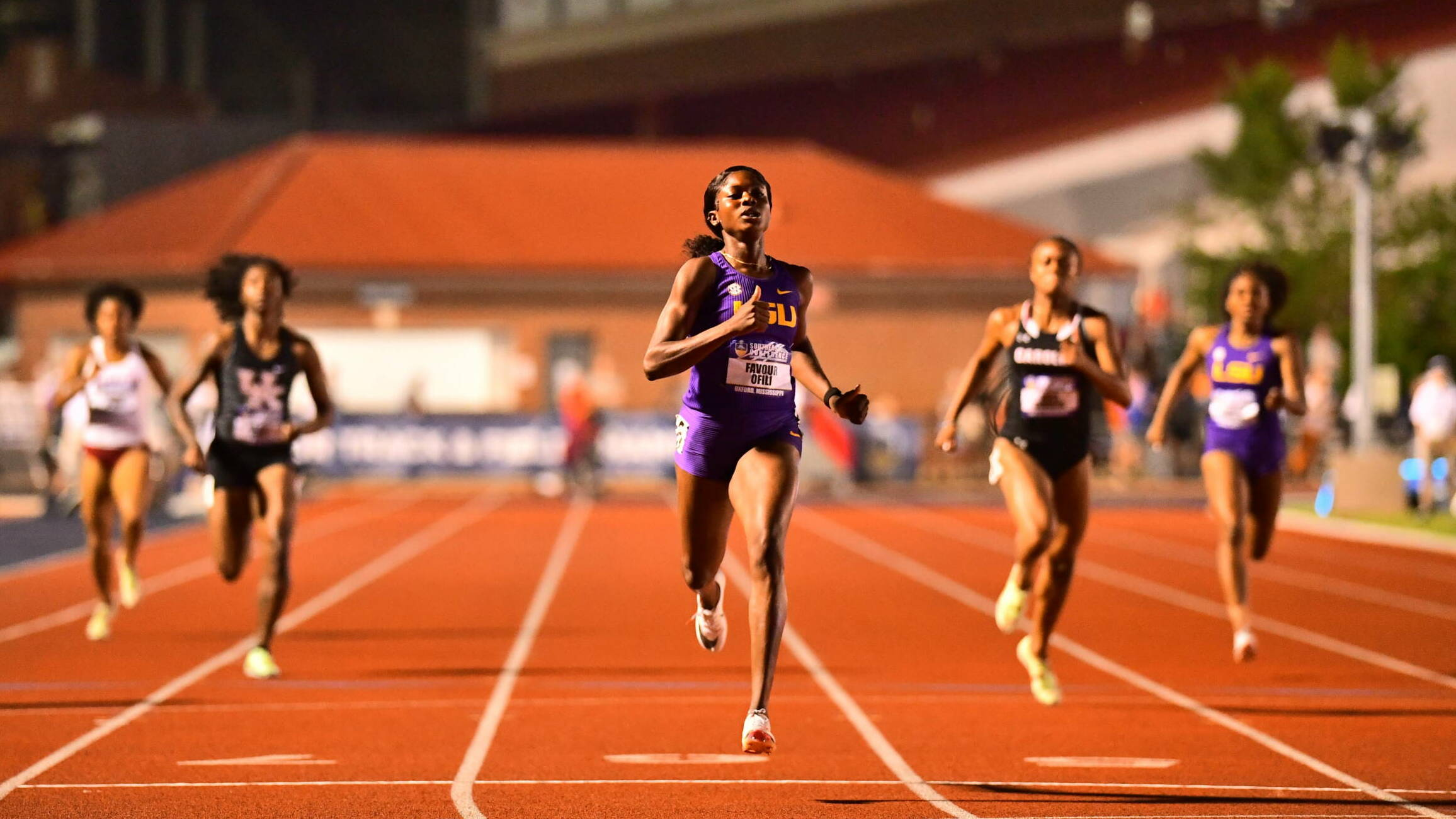 Oxford, Miss.  –  LSU’s Favour Ofili set an SEC meet record in the 200 meter dash with a time of 22.21 in the preliminary round on Thursday night at the Ole Miss Track & Field Stadium to highlight day one of action for the Tigers at the conference meet.

The time of 22.21 by Ofili was easily the fastest in the qualifying round of the 200 meters. It broke the meet record set by Texas A&M’s Olivia Ekpone from back in 2014 that was a 22.23. It also doubled down and set the facility record set by Veronica Campbell all the way back in 2004 with a 22.41. Ofili was LSU’s lone qualifier from the 200 meters on the women’s side.

Action had to be halted at approximately 6:50 p.m. due to a lightning delay. That lasted for almost nearly two hours before things kickstarted again at 8:40 p.m. That’s what made Ofili’s time and performance so impressive; she, just like the other athletes, had to navigate through almost a near two hour delay before competition.

LSU received scoring performances by three throwers on Thursday as Jake Norris (hammer throw), Tzuriel Pedigo (javelin), and Eli Gaughan put points on the board. Pedigo placed third with a throw of 241’ 7” (73.63 meters), while Gaughan finished seventh at a distance of 215’ 1” (65.57 meters). Norris scored for the fourth time of his career with a heave of 227’ 6” (69.35 meters) to place fifth.

The only LSU athletes that competed on the track before the lightning delay were the women’s 800 runners. Katy-Ann McDonald earned a big Q by winning her heat with a time of 2:04.89, and freshman Michaela Rose also earned a spot in Saturday’s finals with a time of 2:04.58.

LSU had three other qualifiers to Saturday from the first day of action. Dorian Camel ran a 20.60 in the 200 meters to win his heat and auto advance. In the 400 meter hurdles, both Garriel White (57.55) and Sean ‘Squirrel’ Burrell (50.07) ran season bests to move on to the finals.

Day two of the SEC Championships will begin at 4:30 p.m. CT on Friday with Ji’eem Bullock in the men’s long jump.