Carla Tejedo posted 3-under 68 and is T2 after two rounds. 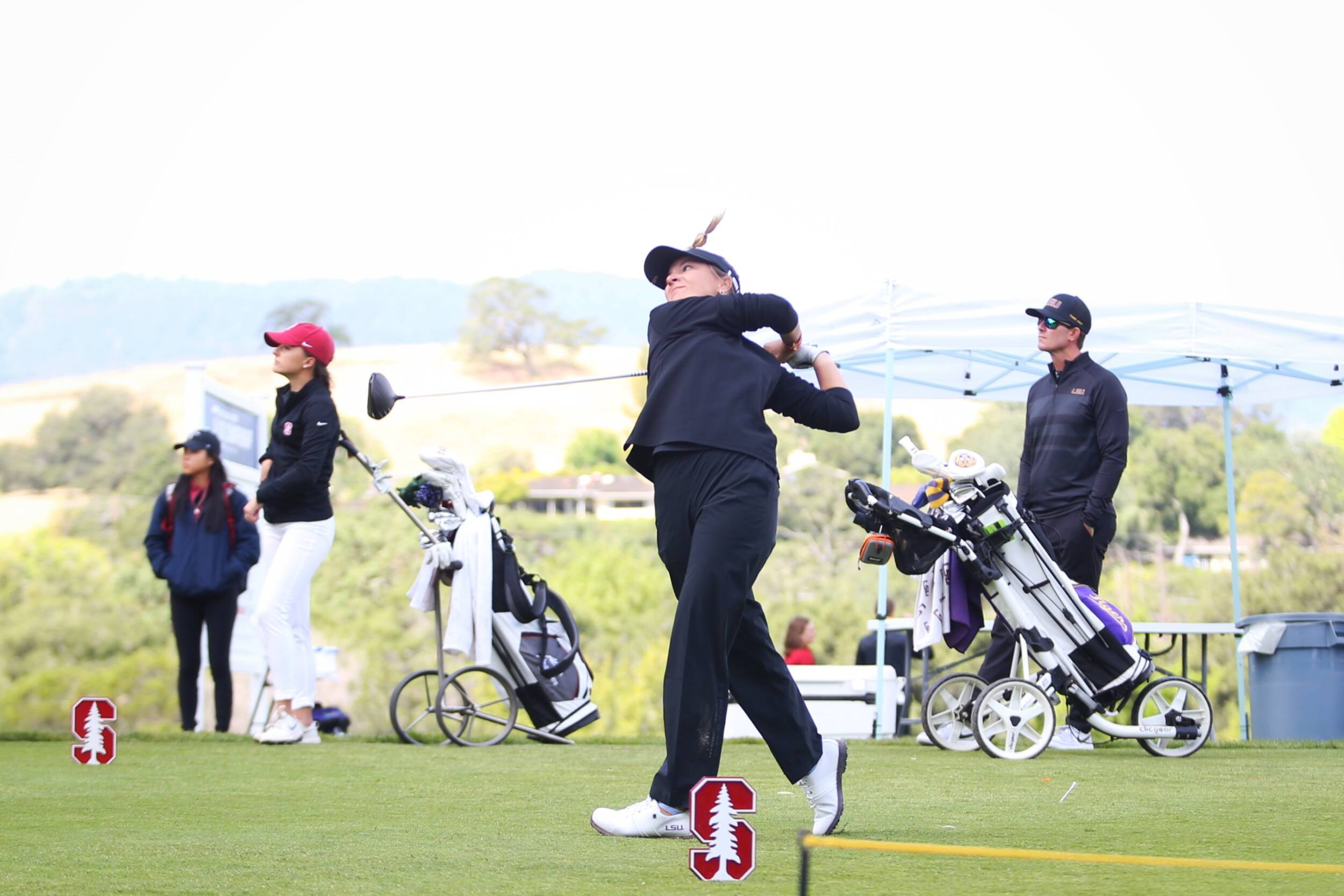 BATON ROUGE – The LSU women’s golf team posted an even par round of 284 on Tuesday in the second round of the NCAA Golf Regional at the Stanford Golf Course in Stanford, California and stands in a good position heading into Wednesday’s final round.

The top three seeds in this event, one of six regional tournaments around the country, have played well with Stanford, Southern California and LSU separating from the remainder of the field.

It is 13 shots back to the teams that apparently could play for the fourth and final qualifying with No. 7 seed Northwestern and No. 8 Purdue tied for fourth at 8-over par 576. It is five more shots back at 13-over to No. 6 seed Iowa State.

After 20 birdies on Monday, LSU put another 17 on the board on Tuesday as they continue to lead the tournament field with 37 total birdies through two rounds. The LSU squad is third at +2 on the par 3s, second at +4 on the par 4s and is -4 for the five players on the par 5 holes.

Sophomore Carla Tejedo had a strong four-birdie round of 3-under par 68 including 3-under over the final 13 holes of the round to post a 36-hole total of 4-under par 138. The No. 70 golfer in the nation is tied for second in the field, two shots behind Amari Avery of Southern California at 6-under 136 (69-67). Brianna Navarrosa of USC is tied with Tejedo for second, also at 4-under.

For the second straight day LSU has three golfers in the top 10 as junior Ingrid Lindblad came in with an even par 71 and is T6 at 2-under 140 (69-71). Nine total golfers are under par after 36 holes.

LSU also got an even par round of 71 from senior Jessica Bailey, including a birdie on the 18th hole and a second consecutive 74 from freshman Elsa Svensson. Bailey is T20 after 36 holes.

“It was a solid round for us (Tuesday),” said Coach Garrett Runion of his team’s play. “I was really pleased with how we played. Obviously, we would have liked to be a little better at the finish. We were a little up and down the last few holes. But we had six birdies in the last five holes which was good. Jess’s birdie on the last hole was nice for an even par round. Carla’s 3-under was really solid and carried up. Latanna hung in there, she just didn’t make any putts.

“All in all, if you had told me at the beginning of the week we would have a 13-shot advantage over the fourth spot going into the final round I would have taken it. We are going to go out there (Wednesday) with the idea of trying to catch Stanford and USC and see if we can’t win this thing. That’s the mindset we want and not just slide into the top four. It was a good day and we look forward to the final round,” the fourth-year LSU head coach said.

For the third straight day, the Tigers will be paired with USC and Stanford in the final wave beginning at 9:06 a.m. PT (11:06 a.m. Baton Rouge time). The teams ranked 4-9 in the standings will tee off an hour and six minutes prior to the start of the LSU wave.

The top four teams and two individuals not on the top four teams will go to the NCAA National Championship in Scottsdale, Arizona starting on May 20. LSU is trying to go to the championships for the second consecutive year, the first time since LSU went back-to-back in 2011-12.

Live scoring Wednesday can be found at Golfstat.com. On the home page, are the listing of the six women’s regional tournaments. Hit the Stanford Regional link and go to the team leaderboard.

The Golf Channel's Jim Gallagher Jr., interviews LSU's Ingrid Lindblad after her 2-under par round of 70. The junior finished the NCAA Championships tied for third.
Gallery: Women's Golf NCAA Championship - Round Four