Fore! On The Tee -- LSU Women At NCAA Regionals 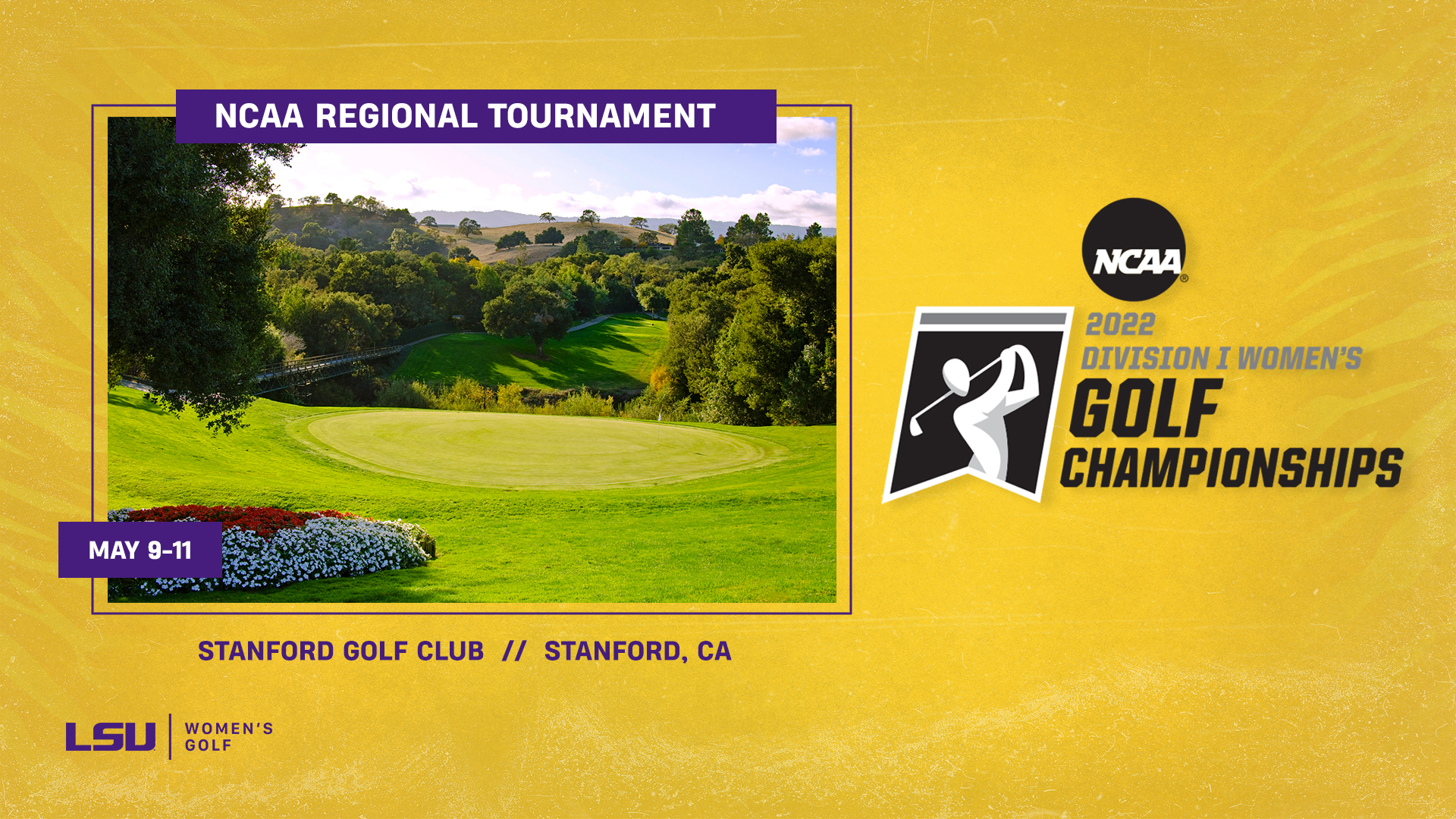 BATON ROUGE – For 72 women’s golf teams including LSU’s No. 13 Tigers, the remainder of their 2021-22 golf season will be decided over 54 holes that begin in six different locations on Monday morning.

For 24 of those teams, and some individuals, the future is the NCAA Golf Championships in Scottsdale, Arizona beginning on May 20.

But for now, all the focus for LSU has to be on the Stanford Golf Regional in Stanford, California as part of a new day in women’s college golf.

“During the selection show, one of the hosts on the Golf Channel said that this was the least fun tournament of the year,” said LSU fourth-year Head Coach Garrett Runion. “I think there is a lot of truth to that as we certainly have more of a business trip mentality for this trip, more so than normal. Everybody knows and understands the pressure of advance or go home.”

For the first time, the NCAA women’s golf committee is going with the same format as the men with six different regional sites. Unfortunately, they did not try to add the same number of advancing teams for the women (24) as the men (30). So, in each of the six regionals only four will advance.

“This year, more than previous years it seems to feel like there is a little added pressure or at least it feels different with only four teams advancing from each regional vs six in years past. With this rule change, the importance of starting off strong, staying patient and playing smart team golf is more crucial than ever.”

Stanford is No. 1 in the Golfstat performance rankings with Southern Cal at 12, LSU 14, Texas 24 and Kentucky at No. 25.

The Tigers are coming off one of the most important moments in recent program history, winning three matches against Vanderbilt, Alabama and Florida to capture the school’s first Southeastern Conference golf championship in 30 years. Also, junior All-America Ingrid Lindblad eagled the 54th hole in stroke play to capture the SEC individual title, LSU’s first in 31 years.

“We’ve had a great year and are playing some of our best golf at the right time,” said Runion. “One of the hardest things to do is stay hungry and not get complacent after a big tournament win like the SEC Championship. I think there has been enough time to enjoy that win and get back to work with focus on the two biggest tournaments left this year, but first we have to focus on regionals.”

LSU’s SEC lineup will be back on the course with Lindblad joined by Curtis Cup, Palmer Cup member Latanna Stone, sophomore Carla Tejedo, Swedish freshman Elsa Svensson and senior Jessica Bailey, who has come on to play every event in the spring semester.

The ironic thing for LSU’s top three golfers with significant experience in some of the game’s top events is that none of them have ever teed off in an NCAA regional. The 2020 regional was postponed by the pandemic and lengthy weather delays and a decision by the NCAA Golf representatives canceled the regional in 2021.

“We can look a little older on paper but really haven’t played much post season,” said Runion. “All the ladies are excited they get to play in regionals, but the ones from last year are a little extra excited and motivated to play. They have a little chip on their shoulders because they had a full year of listening to and reading all the comments about last year’s regional and they want to go out and show what they can do.”

While no one on this particular team has played on the Stanford Course in college competition, this will be the third regional the LSU women has appeared in at the Stanford Golf Course. The LSU Coach does know about it having been a part of events as a player and men’s assistant coach.

“I played there in 2005 for Regionals and we didn’t play well at all. They have since made some changes to the course and I got to see those in 2019 when I coached with the men for their regionals. We advanced so I have better memories from that,” Runion said. “It’s a good course where pars matter and that is good for us. It can play a little longer, which is also good for us. If they have the rough up, which is what I am expecting it puts a premium on driving the ball straight and hitting the fairways.

“Once we get there and play a practice round I will have a better judgement of what a good score is but history shows scores tend to go higher vs lower on that course,” he said. “It will be very important for us to have a good practice round as nobody has played it before and make good notes on how to get around the course and know the places to miss and not miss.”

LSU will play in the first wave Monday morning with Stanford and USC at 8 a.m. PT (10 a.m. Baton Rouge time). With 12 teams, there will be two waves teeing off on both the first and 10th tees. It is expected the final pairing of the wave will feature three of the top five players in the Golfstat performance rankings – No. 1 Rachel Zhang of Stanford, No. 2 Lindblad of LSU and No. 5 Amari Avery of USC.

Zhang and Lindblad are 1-2 in the Women’s World Amateur Golf Rankings and Avery is No. 21.

The schedule is one round each day through Wednesday with the top four teams advancing to nationals along with the two golfers with the lowest individual score not on those teams. Live scoring for the regionals will be available on Golfstat.com and updates throughout the round will be available on Twitter @LSUWomensGolf.