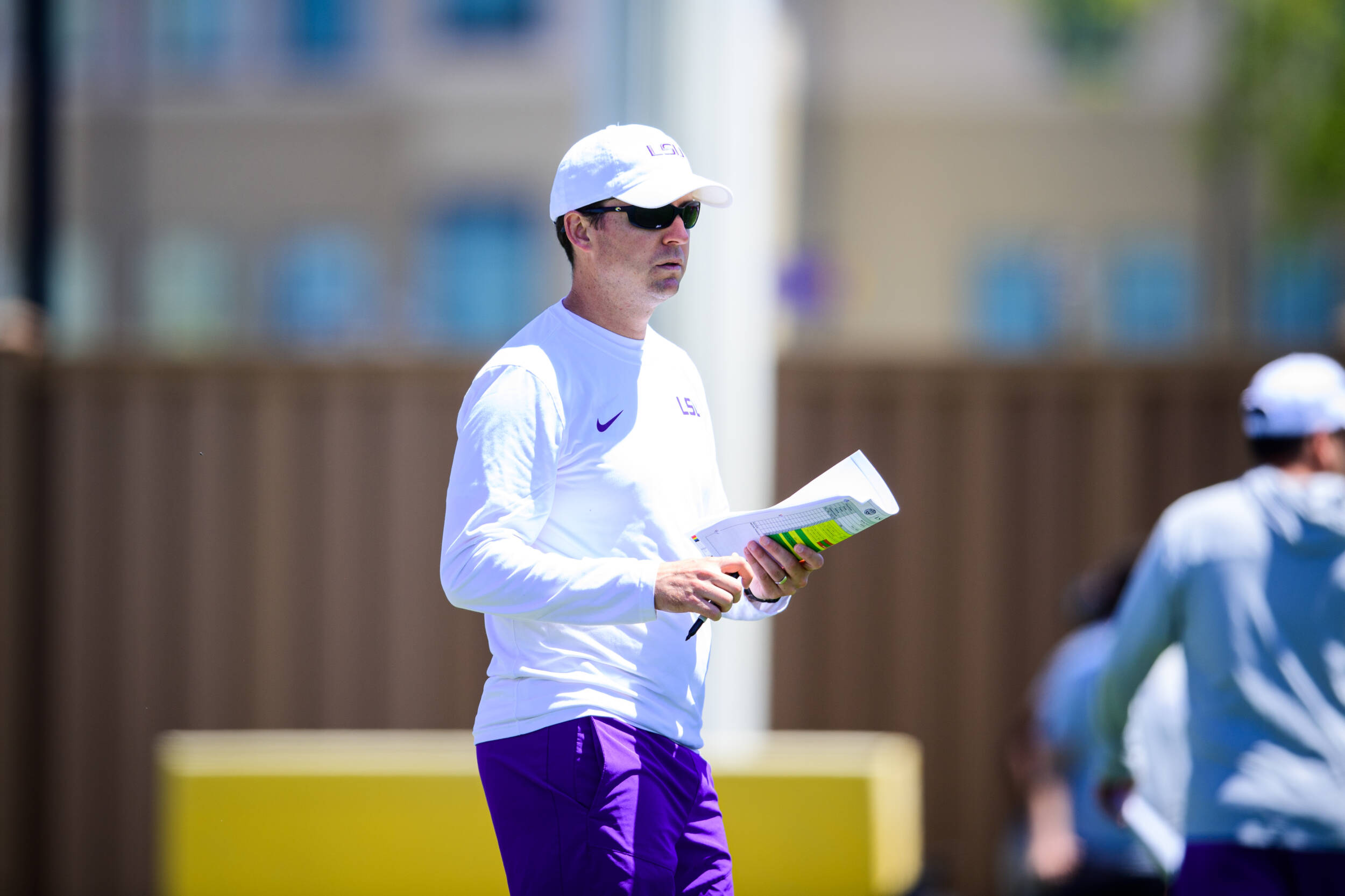 Emily Dixon: Why was it the right time for you to make the move to LSU?

Joe Sloan: I think being in the state of Louisiana for the last nine years, you start to understand how special of a place this is. I think nationally everyone understands that. But I think the closer you are to this program, the more that you truly come to understand what type of place that LSU is, and LSU football is. So as soon as Coach Kelly got here, and his history and what he’s done, and in college football, and all the different places he’s been combined with LSU and the greatness that this place is. I think it was a no-brainer. It was really a dream come true.

ED: Knowing what LSU means to this state, how is it exciting is it for you to now recruit for and represent LSU when you’re going into these schools?

JS: It’s so fun to sit there and understand when you’re going in to talk with a kid, or when a kid comes here on campus, and just what LSU football has meant to him growing up. Then you can be the one who’s talking to him about LSU football, you can see that smile on his face, you understand that this has probably been a dream of his for a long, long time. Putting those two things together, being the bridge between LSU and one of those recruits, is it kind of special. It’s fun to be a part of and I’m glad I get the opportunity to help try to bring our in state prospects to LSU so they can represent this state and this football program.

ED: How would you describe the culture and team Brian Kelly wants to build here at LSU?

JS: I think it starts with accountability. I think that’s where it all starts. That’s what Coach Kelly preaches every single day, is that we’re going to develop trust, and we’re going to develop habits through accountability to our teammates. That’s going to carry over to winning on Saturdays. In order to win, he talks about developing a process towards that. It starts with your decisions you make on a daily basis. It’s consistency with that and not trying to make any more cute, different words for it. It’s going to be consistent every single day. Are you accountable to your teammates? Are you developing those habits and traits that it’s going to take to win? I think the simplicity of how he communicates that is really, really important. I think that’s why our players understand that and why they’re buying into it.

ED: Coach Kelly put together staff filled with college and NFL expertise and coaches from all over the country that haven’t coached with each other before. How’s it been getting to know this new offensive staff together?

JS: Well, it starts with a great group of men. That’s a big thing. In the staff room, we have a lot of personalities. We have a lot of fun in there. From the guys that are coaching positions, to some of the different analysts and graduate assistants. I think it’s just a great mix and Coach Denbrock does an awesome job of making sure that we bring out our personalities and all our different backgrounds and expertise in some of our different experiences to make sure that we can have the best offense possible at LSU. So that we can be the best offense in the country. That’s what we want to do. But I think it definitely starts with the camaraderie and the bond that we have together. I think with some of the different personalities in the room, that’s been easy. It’s been fun.

ED: How would you describe the type of offense that Denbrock wants to run and how you want to utilize your quarterbacks?

JS: I think the great part is we’re challenging the quarterbacks mentally and physically and using using those strengths to help us offensively to create an explosive offense to where we can spread the field from side to side, but also stretch people vertically. I think that’s the big thing. The quarterbacks have been doing an awesome job trying to make sure that we make that defense defend every piece of the field. I think that’s been the exciting thing is watching them grow and start to understand the different pieces of all the different plays that we’re running and how those are attacking the defense and how we can use that to create explosive opportunities for our skill players we have. The guys that we have here right now are unreal. Just us being able to get the ball accurately to those guys on time so we can make them runners and make them explosive. I think that’s been our key in the guys are really buying into in the quarterback room.

ED: What’s been your approach getting to know a whole new group of guys?

JS: I think that’s where coaching starts. It’s about people. It’s about relationships. In order to get coached, they want to know that you’re making them better, but I think even before that, they want to know that they have a relationship with you and that you care about them as people. I think that’s where it starts. That’s why I got into coaching. It’s about relationships on a daily basis. I try to find something that I have in common with him or something about their personalities that I want to make sure they highlight and bring out. I think that’s a consistent day-to-day approach. But the big thing is getting to know someone. It’s no magic. It’s time. Do you spend time with those guys? Do you allow them to show who they are so that we can develop that relationship so that when we talk about what they need to do in order to execute and be their best? They know that I have their best interests at heart. They know that I want them to do the things that are going to allow them to execute at the highest level. I think it all starts with those relationships that you’re talking about.

ED: This is one of the most talented groups of quarterbacks we’ve seen it LSU. You have so many different levels of expertise among them in your position room from Walker Howard to Myles Brennan. Even though they’re all competing for the job, how have you seen them as a whole group work together and form those relationships with each other?

JS: That’s where I’ve been so fortunate. When you get into situations like this where everyone wants to be the starting quarterback at LSU, they all have the talent to be and that’s what their mindset should be. But what I’ll give them credit for is they’ve come in and allowed the room to be relationship-oriented. They’ve tried to bring out the best in each other. They’re trying to enjoy their time together on a daily basis because we’re in there a lot, right? We’re on the field a lot. They’ve been able to work together. That doesn’t mean that each one of them doesn’t want to be the best and be the guy. But I do think that they’re enjoying those relationships together. I commend them for that. It’s been it’s been a fun group to coach.

ED: Going through spring ball were the main points of emphasis to focus on that they got a little bit of time.

JS: I think I think everything with quarterbacks starts with taking care of the football, taking care of the football, making great decisions, and making sure that you are the heartbeat and rhythm of the offense. And that’s been the big thing is is as we learned, you know, a lot of a lot of being in a new system. And in our first spring here, a lot of it’s about learning, learning, our plays, right? Learning the different assignments, and then learning our plays based on what the defense is showing you. Right and how to make those adjustments within within the you know, after the snap. So a lot of that’s been going on, but at the same point in time, we still have to we have stopped to stick to the core fundamentals of playing quarterback, and that’s taking care of the football and making great decisions. And then being that being that leader being that engine and that that that driver who makes the rhythm of our offense go and I think especially on the second half as it’s less about assignments, it’s going to be more about truth, the truth on them. known as a quarterback play and putting us in a position to be successful right and that’s where that’s where it’s all gonna start and that’s that’s what’s important for the quarterback to make the other 10 around another 10 guys around you and make all of LSU football better because you’re out there and you are you’re the engine behind what we’re doing

ED: Lastly, what does Joe Sloan do when he’s not coaching football?

JS: Hanging out with my family, with my wife, and my young daughter. She’s a trip. That’s got to be where it starts. Little golf in the summer and a little hunting in the winter. Whenever we do get some time, those are two pretty good things and Louisiana is not too bad of a place to do that. That’s a usually what it is.