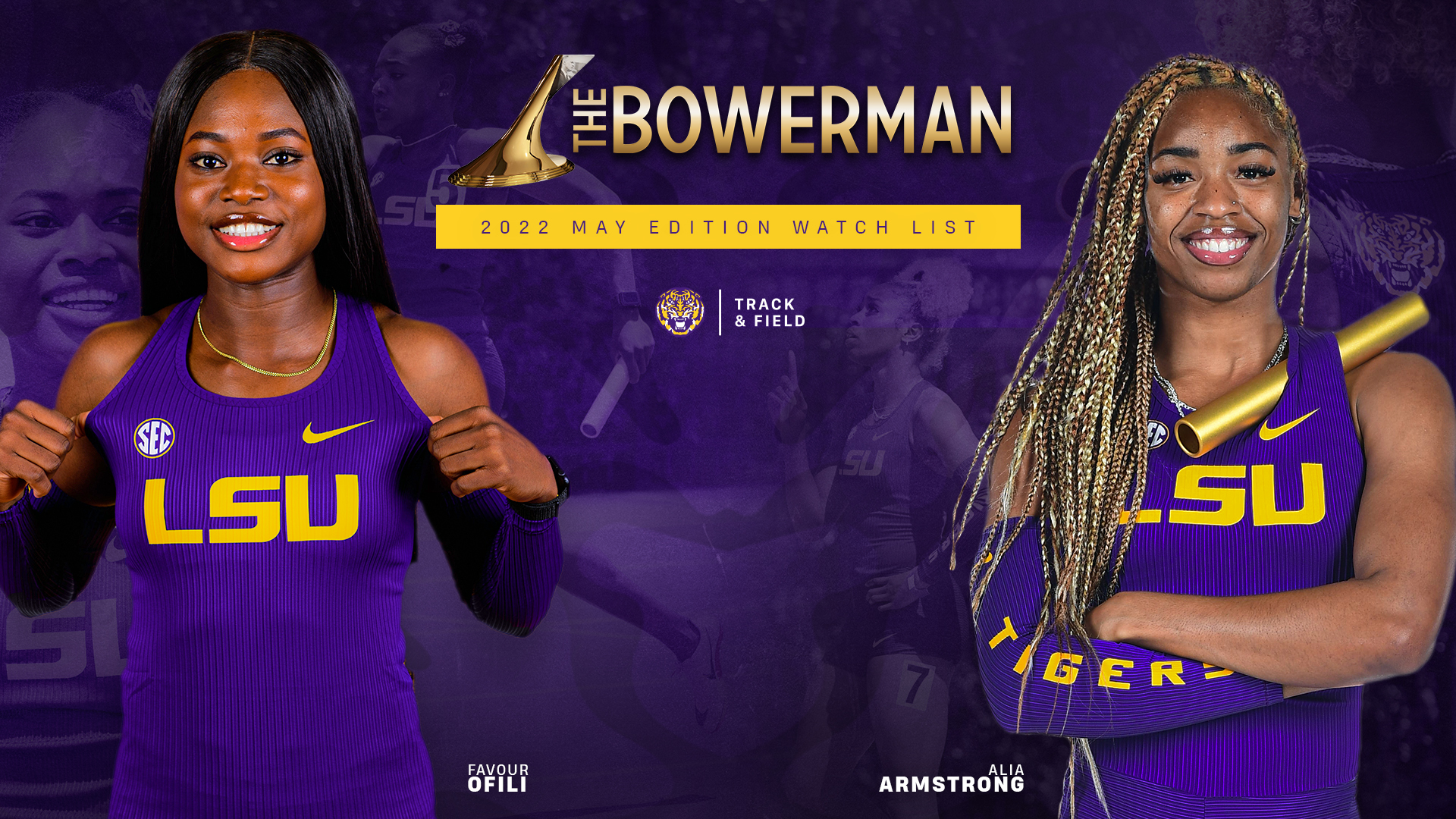 Baton Rouge, La. – LSU track and field athletes Favour Ofili and Alia Armstrong were announced as members on The Bowerman Watch List – May Edition – on Wednesday afternoon. It’s the second career appearance on the watch list for both Ofili and Armstrong.

Ofili has continued running fast after initially being named to The Bowerman Watch List on April 20 after her collegiate record setting time of 21.96 in the 200 meters. Since then all she’s done is run sub-11 seconds twice in the 100 meter dash – first a wind-aided 10.90 on April 23 followed by a wind legal personal best of 10.93 on April 30.

The time of 10.93 resulted in a win over three Olympic/world medalists at the LSU Invitational as she defeated professionals Aleia Hobbs, Mikiah Brisco, and Jenna Prandini. Her time of 10.93 (No. 8) in the 100 meters and 21.96 (No. 1) in the 200 meters makes her one of only five athletes to have top-10 ranked performances in those events in collegiate history.

Already the Nigerian record holder in the 200 meter dash, the time of 10.93 in the 100 meters moved Ofili up to No. 3 on the all-time Nigerian list, and it made her the eighth fastest performer in collegiate history.

Armstrong picked up a head-to-head win over Florida’s Grace Stark on Saturday in the 100 meter hurdles with a winning time of 12.72. The win over Stark, who is also on The Bowerman Watch List, helped Armstrong find her way back on to the watch list for the most coveted award in collegiate track and field. The two have raced twice head-to-head this outdoor season with Stark winning in Gainesville, Florida, on April 16 before Armstrong leveled the matchup on April 30 in Baton Rouge.

Armstrong owns a career best wind-legal mark of 12.61, which makes her the 13th fastest performer in collegiate history. The mark that turned heads early on in the outdoor season was Armstrong’s slightly wind-aided 12.33 in the 100 hurdles. That time made Armstrong the fastest collegiate ever in the event under all conditions as she had a slight helping wind of 2.5 meters per second.

Ofili and Armstrong will both be back in action for LSU at the 2022 SEC Championships in Oxford, Mississippi, May 12-14.