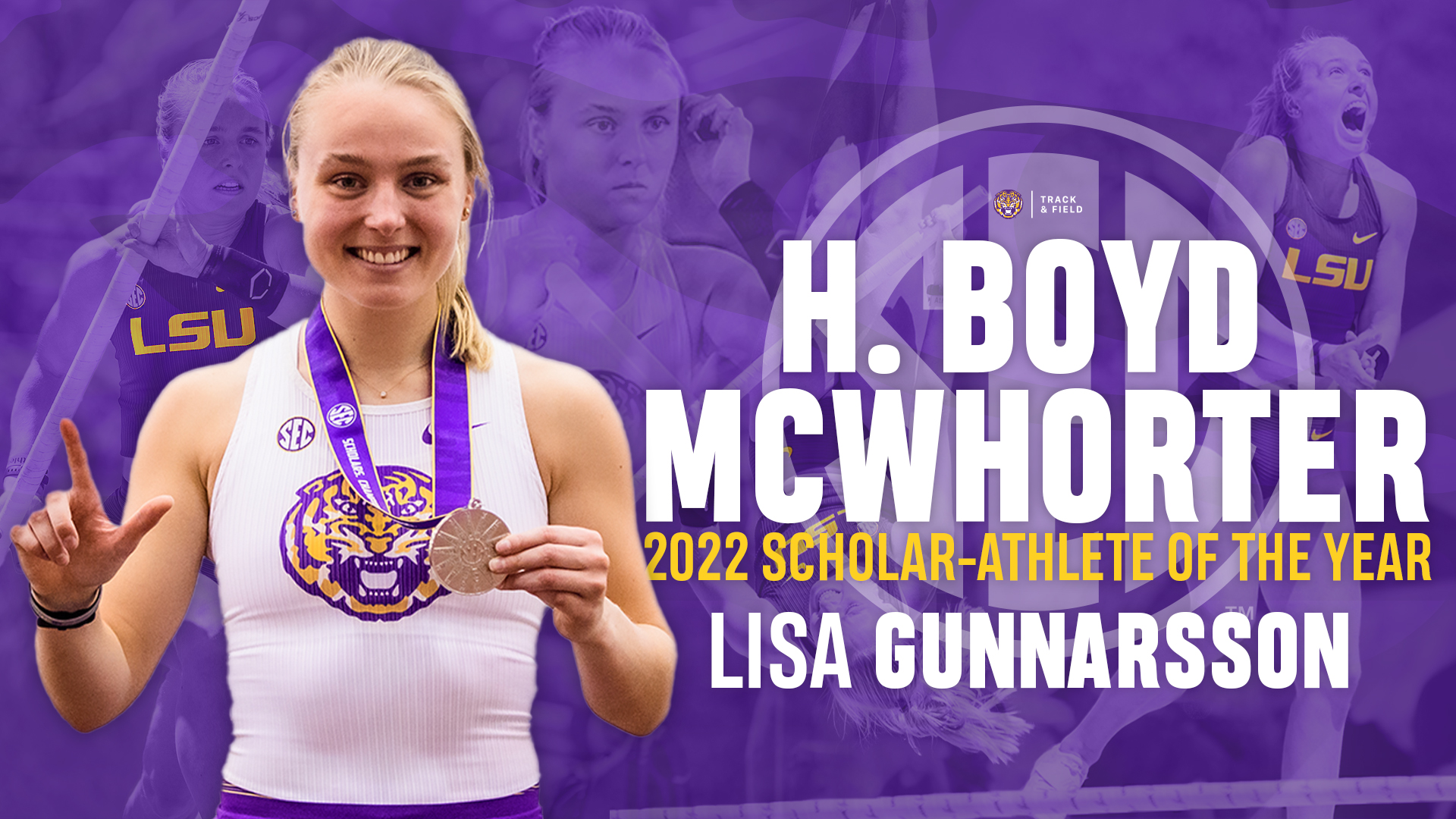 Gunnarsson becomes the second LSU track and field athlete to garner the most prestigious honor the SEC gives out each May joining Mikael Olander, who won the award back in 1989.

“I’m very, very happy and it’s a huge honor to be the recipient of this award,” Gunnarsson said. “It’s really going to help me take my next step in my academic career and will pay dividends for my future.

“I want to thank my coach Greg Duplantis. He has supported me and believed in me all this time. Next, I want to thank the Mechanical Engineering Department here at LSU; they are why I want to continue my schooling in this area of study. I love mechanical engineering, and I love track and field as well. I wanted to combine both and that’s why I came to LSU in the first place.”

Gunnarsson was chosen by a committee of Faculty Athletics Representatives from SEC universities and will receive a $20,000 post-graduate scholarship. Mississippi State’s Austin Williams (football) was named the men’s H. Boyd McWhorter Scholar-Athlete of the Year.

“We congratulate Austin and Lisa as they are outstanding representatives of student-athletes from across the SEC,” Sankey said. “These young people are committed to the total student-athlete experience, and it is reflected in the elite level of their academic and athletics accomplishments. The H. Boyd McWhorter Award is the highest honor earned by a student-athlete in the SEC and I congratulate both of them along with their families and universities on their outstanding achievements.”

Gunnarsson has excelled in the classroom and in the field of competition since arriving at LSU in the fall of 2018, and this award only adds to her impressive list of academic and athletic accolades she’s earned while wearing the Purple and Gold.

A mechanical engineering major with a 4.16 GPA, she is a six-time honoree on the LSU President’s Honor Roll and a three-time member of the SEC Academic Honor Roll. Gunnarsson will graduate later this month and will be joined by both her mother and father in Baton Rouge for the ceremony.

“This is the grandest award that a student-athlete in the SEC can receive,” LSU Track and Field Head Coach Dennis Shaver said. “Our goal is to provide our student-athletes with the resources to achieve their full potential in the classroom and in competition. We are so proud of what Lisa has accomplished during her time at LSU and we know she has a bright future ahead of her.”

A six-time All-American and four-time All-SEC performer, Gunnarsson owns both the indoor and outdoor school records at LSU to stake claim as the greatest women’s vaulter in program history. Her lifetime best clearance of 15’ 3” (4.65 meters) that she registered just over a month ago at the Texas Relays made her equal to the fourth best performer in outdoor collegiate history; it also ranks No. 5 in the world this season and is the third best clearance ever by a Swede outdoors. The mark has qualified her for the 2022 European Championships which will take place in August in Munich, Germany, where she will represent Sweden.

For a complete history of the H. Boyd McWhorter Award, visit secsports.com.